Santa Rosa, Calif. – On Dia de Reyes, the Day the Three Kings, a false king was exposed. Wells Fargo is the king of private prison finance, a king who shows no remorse as it forecloses on the houses and homes of its victims. But, on Friday afternoon, Jan. 6, two branches of Wells Fargo in Santa Rosa were closed for the day and seven people were arrested after they did civil disobedience inside the banks.

The protest, a collaboration between the immigrant rights community and the Occupy movement, drew 400-500 people for a march and rally. Their target, Wells Fargo, is the trustee of a fund that is heavily invested in two private prison corporations, Corrections Corporation of America and the GEO Group. These corporations own a majority of the detention centers that house undocumented immigrants across the U.S.

These same corporations helped draft the model for the Arizona anti-immigrant law, SB 1070, insuring a steady stream of immigrant prisoners for their private detention prisons. Because they contract with the U.S. government at a cost to taxpayers of $5.5 million a day, they profit from the misery of the immigrants and their community.

Okili Nguebari, originally from Congo, Africa, spoke at the rally about his experience in a private immigration prison. Three years ago he was picked up in front of his home by Immigration Customs Enforcement (ICE) and held for three months in an immigration detention facility owned by Corrections Corporation of America (CCA) in Eloy, Arizona.

In addition, the protestors challenged Wells Fargo’s practices around foreclosures and short sales of houses in Sonoma County. In only four years, foreclosures in the county have skyrocketed from 71 to 4,469 homes – nearly 4,450 families this year have lost their houses and all of their equity because banks and financiers manipulated the market.

Protestors unfurled a banner in the lobby of the main branch of Wells Fargo reading, “Homes Not Jails.” Then they read statements about the bank’s financing of private prisons and stories of people affected by deportations until they were arrested. Wells Fargo personnel detained at least two of the protestors in a citizen’s arrest.

“It was empowering to stand there and speak the truth,” Carolyn Epple said about her act of civil disobedience.

The protestors called on all Sonoma County residents to demand that Wells Fargo immediately divest from investments in immigrant prisons and declare a moratorium on foreclosures in Sonoma County. They also asked people to move their money from Wells Fargo into a local bank or credit union.

Jesus Guzman of the DREAM Alliance at Santa Rosa Junior College called the protest a “defining moment” for both the Occupy and Immigrant Rights movements.

“It’s about time,” he said and, judging by the cheers, the crowd agreed.

The coalition included the Graton Day Labor Center, the DREAM Alliance of Sonoma County, MEChA of Santa Rosa Junior College, the Committee for Immigrant Rights of Sonoma County, as well as Occupy groups from around the county. An Occupy Petaluma contingent rode bicycles to the rally.

Adrienne Lauby is a Bay Area-based writer and a programmer at KPFA Radio 94.1FM. She can be reached at adrienne@sonic.net.

Editor’s note: Private prisons that Wells Fargo invests in also house thousands of California prisoners moved out of state prisons in response to a federal court order to reduce overcrowding. 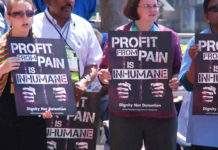 Inside a CCA private prison: Two slaves for the price of one

Fly Benzo is free, so why is Mendell Plaza a no Fly zone?

Murder in the neighborhood: Arnieville