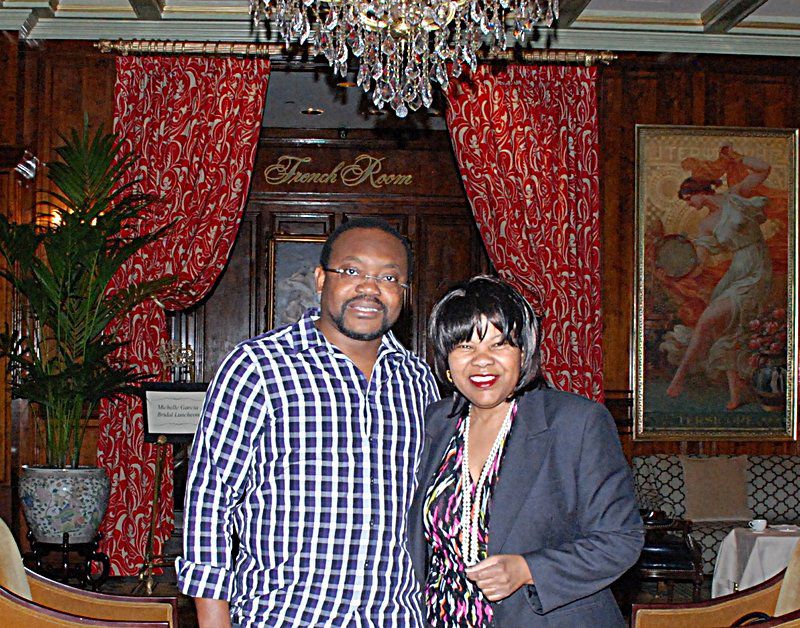 In the midst of the Dallas Film Society’s International Film Festival in April, Southern Methodist University hosted the 38th African Literature Association Conference that feted celebrated international film director Jean Pierre Bekolo. Inspired by Spike Lee, Bekolo says Lee “gave me the vision that I could do this thing, that I could film from the perspective of Africa.”

The 20th anniversary of Bekolo’s groundbreaking “Quartier Mozart,” observed during the conference at the historic Aldolphus Hotel in Dallas, included a screening of the film at the Hughes-Triggs Theater at the Southern Methodist University campus.

Bekolo was headlined along with the highly respected Ama Ata Aidoo, a prolific writer from Ghana. The conference was also the occasion of Aidoo’s 70th birthday and her new book, “Diplomatic Pounds and Other Stories,” was launched.

As I interviewed Bekolo over lunch at La Fiorentina near the SMU campus, he immediately began talking about the creative process and the need to “write from a place and not for an audience.” “If you write from a place, you are more likely to speak truth than if you write for an audience because you can be easily manipulated by the expectations of the audience,” he said eloquently with a French accent.

There we were tête-à-tête and his interest in truth and speaking truth to power pulled from me several revelations. It was as if I had walked into the confession chamber of a priest who looked at me soul to soul, eye to eye. I was interviewing him for LaHitz Media’s Jacquie Taliaferro, a Cannes International Film Festival comrade he’s known since his film was honored there in 1992; but the director in him was calling to the latent, long-buried University of Georgia Drama Department-trained actor in me.

As Africa via Europe loomed heavy in the conversation, I finally confessed to someone. I confessed to the African director, priest of sorts, that for years I had no interest in visiting Africa. I would tense up and try not to roll my eyes when the converted would swoon about going to the Motherland. To keep from having “knockdown-drag out” fights, I would keep my lips sealed ever so tightly.

“Over the past few years, my heart has been softening because I understand why I had this deep-seated disdain for kissing the holy Motherland ground no matter how many epiphanies returning people shared. Bekolo, this is it for me: No one goes and takes what is precious to you without a fight. Africans helped the ‘White Man’ take my people from Africa, number one, and, number two, no one came after us,” I said with cold intellectual composure looking him straight in the eyes.

Inside, I wanted to “hollah” as in “throw up both my hands,” but it was not the time nor place; I didn’t care how probing yet compassionate this African priest’s eyes were. So the silence sat in the air and then he spoke with an idea for resolution, if not restitution.

“You know, I have a friend in Cameroon who is giving away land to African Americans and will be performing a naming rite ceremony in December,” he replied directly as if to say, “Here, Jackie, now feel better, no? Yes!”

“Interesting,” was my response, not wanting to be too eager to accept the psychological olive branch and trying to resist yet another stone from being chiseled from my “I’m-not-interested-in-going-to-Africa wall.”

“You should come to Cameroon,” he said fervently!

“Everything began in Cameroon,” he laughs. “At least that is our myth.” “Even Obama.” “Obama is a Cameroonian name. Cameroonians migrated to Kenya and the name comes from our country. I will show you. Look at my passport, you will see my name, he exclaimed. There it was on his passport “Bekolo Obama.”

“Take a look at the film I made for the Cameroon Department of Tourism.” In a series of video clips, “A Continent Called Cameroon,” Bekolo uses the a cappella voice of a singer calling to would-be visitors as the visual elements of earth, wind, sky and water join in chorus to give the message: “Cameroon, All Africa in a Country.” The imagery is in harmony with the words from the Cameroon National Anthem: “Land of promise, land of glory, thou of life and joy, our only store!”

“You were here in Dallas for the 20th anniversary of your film, what are you working on now?”

“I am doing more writing now. Films are so expensive to make and I am feeling the urgency to make changes now through the power of art. I just wrote a piece about President Paul Biya and it is causing quite a stir.”

“Don’t tell me I should be afraid that your country’s secret service is going break up this lunch and take us away,” I said, laughing, scanning the room, yet still thinking in this not-so-free world, in this post-Patriot-Act-in-America world, in a world where it was acceptable for the first Black president of the free world to have a subordinate governor wag a disrespecting chiding finger in his face, my levity could have easily turned into a point of true concern. Will Smith and Regina King in “Enemy of the State” came to mind.

After my laughter, in answer to my real question, he responded: “Yes, you can read it. It is on the Internet. I said what some would consider some very hard words, but I framed my concerns from the perspective of a marriage. Our president was betrothed to Cameroon with great love and passion, yet over the years the fire has died. He spends more time in Switzerland than in Cameroon. What is he – too good for us now?”

“So your political essay has President Biya in the role of the adulterous husband who took the best years of his young wife but now is enthralled with a younger woman; is that your point?” I responded.

“Yes, you understand. It takes us forever to greet each other and say goodbye to give you a picture of our culture. And with all the time expended with these niceties we extend to each other, foreigners are coming in and taking away our resources, and our government is helping give away the country. So, given our culture, my words expressed in this metaphor – and that I believe should be stronger – have offended some people.”

The core of the creative process came full circle in our conversation. “Although you don’t write for an audience – you write from a place – you have to take into consideration whether you can be understood and received,” Bekolo instructed.

“Like Jesus said, ‘You can’t put new wine in old wine skins,’” I responded. “You have to have a thing or vehicle people understand, and you communicate from that point. Is that what you are saying?”

“Yes, that is why I used the metaphor of a marriage, so people could absorb the idea to grapple with the fact that this man, who is in his 80s, has been wrong for Cameroon for too many years. It is time for change,” Bekolo strongly expressed with a surge of vocal enthusiasm as I looked around the restaurant for the Cameroonian government agents.

When Bekolo described the vestiges of colonialism that still remain – how, as an example, the Free Masons were sold as an organization that up and coming men had to join, yet at the top of the pyramid in Cameroon sits a White man who has no power but what was given to him by the Cameroonians – and how subservient Cameroonians are the ones who are chosen for positions of power to keep the masses under control while White men overtly or covertly rule, I thought of my conversations with filmmaking comrade Taliaferro. His description of Cameroon could be the flip side of a dime for Blacks in America on so many levels, from nonprofits to government to corporate America. There are glimpses of the mirage of Black Power while major control is still in the hands of White America.

So what’s the solution? Morality and truth through media, he said in so many words. We must create our films and our media from our worldview and stop trying to fit into the European paradigm to be accepted by them or approved by them, he passionately stated. Bekolo reminded me of the Book of Daniel.

Daniel, when encompassed by an alien culture, having been stolen from his homeland and forced to accept the ways of the oppressing culture, he stayed true to his beliefs. Daniel refused the food and trinkets of the Babylonian culture, yet rose to great stature and leadership – and he shared that leadership with Hananiah, Mishael and Azariah.

Most recognize his “true to our native land” comrades as Shadrach, Meshach and Abednego. Daniel, although first to gain recognition and power, did not succumb to the temptation of remaining the “first and only.” He made a way for others, a trait that raises a people and opposes the ease and comfort of the “first and only” philosophy that keeps an oppressed people oppressed.

Bekolo, who spoke of returning the “old ways” of Cameroon, said he is looking for opportunities to join with other like-minded people to establish a new paradigm for Africa that is based on morality and truth. He ended our conversation with a call for freedom and unity in carving a brave new world through all media for humanitarian purposes without regard to race and class.

Conversation with Bekolo was stimulated in part by the environment in which we found ourselves. Chosen by chance as I drove in Dallas, a town we both had no familiarity with, in a quick glance we chose to stop in, of all places, La Fiorentina, a Tuscan style restaurant that I now find, days after recapping our talk, is located in an iconic church that dates back to the 1800s.