“Like conscious rappers, mad ‘cause we winnin’” – Tyga in “Lap Dance” 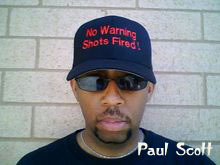 During a recent episode of BMET’s (Black Mis-Eductation Television) Fantastic Friday Rap Battle, the crowd went wild as the champ, B. Grimey dropped bombastic bombs on the challenger, MC Imhotep. By the time he said his third “yo mama so black” rhyme, the celebrity judges were applauding loudly as hosts Clarence C and Rosie danced across the stage. However, when MC Imhotep started rappin’ about how Grimey’s sneakers were made from sweatshop slave labor, his bling courtesy of South African diamond mines and his swag a product of a dysfunctional educational system, the audience sat dumbfounded and the judges ran for cover as Clarence J yelled, “Cut to commercial!”

Hip Hop has a long history of beef with intelligent rappers. I remember back in the day when Kangol Kid of UTFO dissed fellow group member EMD, “The Educated Rapper,” in front of Roxanne with the classic line, “I know you’re educated / but when will you learn / not all girls want to be involved with book worms?” However, since EMD was just a character who wasn’t exactly known for droppin’ knowledge, it was understood as just part of the act.

However, when rappers like Tyga infer that intelligent MCs are just hatin’ on him and his crew because they are “winning,” that, sir, means war!

In fairness, Tyga was not the first to diss Hip Hop brainiacs, as over the years more than a few commercially successful rappers have taken random shots at intellectual rappers. Remember back in 2002, Nelly aimed a diss at “tha Teacha” KRS-ONE when he said on his song “Number 1” that people judging Hip Hop are the ones whose albums flop.

Historically, America has always feared intelligent Black men. Even going back to the early 19th century with Nat Turner. Although he is portrayed in history books as a mindless brute runnin’ around slaughtering slave owners, Turner was intelligent. Also, even though the Black Panthers of the late 1960s were known for bustin’ their guns, it must remembered that the party was founded on a college campus and their main threat to the power structure was their political education classes. Today, since Hip Hop is dominated by Black male voices, the paranoia is still there.

Even though the Black Panthers of the late 1960s were known for bustin’ their guns, it must remembered that the party was founded on a college campus and their main threat to the power structure was their political education classes.

Although Ice T is mostly known for his pimp and gun talk, his most threatening lyric was “my lethal weapon is my mind.” That still holds true today, as, although white mainstream Americans profess to hate violent, misogynist rap music, the reason why they back it financially and give it a platform is because of their fear of the alternative: music that will inspire Black people to challenge the status quo.

So it is not really hate that fuels the animosity against intelligence in rap, but fear. And when this fear is internalized, it morphs into self -hatred. As Marianne Williamson said in her oft quoted poem, “Our deepest fear is not that we are inadequate but that we are powerful beyond measure.”

Although white mainstream Americans profess to hate violent, misogynist rap music, the reason why they back it financially and give it a platform is because of their fear of the alternative: music that will inspire Black people to challenge the status quo.

Although some rappers are actually intellectually challenged in real life, many are just playing dumb. One of the best examples is one of the hottest rappers in the game right now, 2Chainz. Although, he is rumored to be academically gifted and, according to his website, even down with the Hip Hop Congress’s “Respect My Vote” campaign, the message that he sends our children does not reflect any of that. His latest songs, “Riot” and “Rich Man’s World,” could have easily been the political anthems of the Occupy Wall Street and Trayvon Martin Era but instead he chose to continue with the same misogynistic tales of murder and mayhem.

So what do we do?

Contrary to popular belief, there has never been an all out war against Hip Hop ignorance.

Although, back in ‘94, Jeru the Damaja threatened to stab “Mr. Ignorance” “in the heart with sharp steel book marks,” he is alive and kicking. Reason being, over the years we have either looked to a rap apologist going through mid-life crisis, still tryin’ to be down or an overpaid Hip Hop academian to solve the problem.

However, the solutions are simple.

First, we have to stop parroting the lie that the reason that Hip Hop is in its present state is because that is what “we” want.

Unfortunately, anyone who is smarter than a fifth grader is, somehow, always, left out of the official Hip Hop census.

Also, conscious rappers and Hip Hop journalists need to stop goin’ out like suckas. Although, playing dumb may be an entrance requirement for the cool kids table for high school freshman when adults dumb themselves down to fit in with their kid’s homies … We’ll, that’s just wrong.

Finally, as unbelievable as it might sound, the best sage wisdom comes courtesy of the late Notorious B.I.G. on his song “Unbelievable”: “Dumb rappers need teachin’.” If we can’t make being smart cool, at least we can make being stupid uncool.

So no, Tyga, we ain’t mad because you’re winnin’, we’re mad that because of lyrics like yours, our children are losin’.

Although school is out for the summer we have to admit that for Hip Hop, school has been out for decades. It’s time ring the bell and yell, “Class is back in session.”

A generation ago, KRS One proclaimed “the age of the ignorant rapper is done.” Unfortunately, we’ve been singin’ that same song for 20 summers.