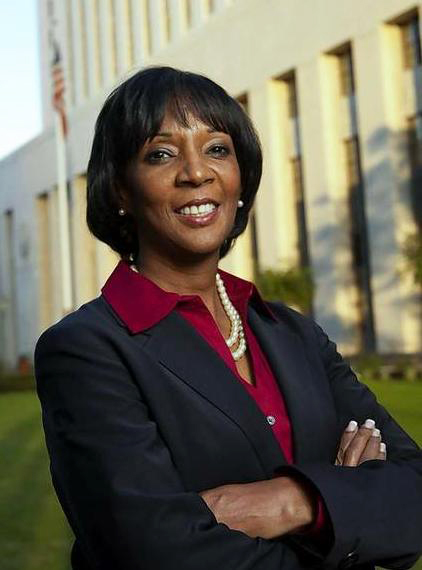 The David who upset Goliath to take the lead in the run-off to become the next Los Angeles district attorney is actually an African American woman, Chief Deputy District Attorney Jackie Lacey, who came out 8 percentage points ahead of second place finisher Alan Jackson and 10 percentage points ahead of perceived frontrunner LA City Attorney Carmen Trutanich, despite being outspent 3 to 1 by the Trutanich campaign.

Trutanich also had Gov. Jerry Brown’s endorsement and the governor’s robo calls on election day. His bad press included the shock of the LA Times, which pointed out that page 10 of his “Blueprint for Justice” called for re-establishment of the California Youth Authority – a network of youth prisons discredited by nearly 20 years of investigations and lawsuits which proved that it was abusing rather than educating and rehabilitating juveniles.

With Trutanich eliminated by a third place finish, Jackie Lacey now faces a run-off with Deputy District Attorney Alan Jackson, who identified himself on the ballot as a “gang crime prosecutor.” If elected, Lacey will become the first woman and first person of color to head the Los Angeles DA’s office. With thousands of state prisoners being sent back to the county jails to relieve prison overcrowding, the next LA district attorney’s decisions will be critical to the future of criminal justice in California.

I spoke to Jackie Lacey on Friday for KPFA and the Bay View, before she left for vacation to rest for her run-off race with Jackson. This as an excerpt from a longer interview soon to be published in the San Francisco Bay View:

Ann Garrison: Jackie Lacey, we’d like to ask you about something that ABC-Los Angeles reported the day after your big primary victory, about you and Alan Jackson, the LA deputy district attorney you’ll face in the November run-off election. Here’s what they said:

“Both Lacey and Jackson agree on the need for rehabilitation and changes because of the three strikes law. Both see one of the biggest impacts on the justice system as the move of thousands of state prisoners to county jails.”

Could you speak to the role of district attorneys in this, the move of thousands of state prisoners to county jails?

Jackie Lacey: Well, this change is being referred to as a sea change. So, just to break it down for your listeners and readers, because “realignment” is not a term that really explains what happened:

Our prisons were overcrowded in California. At one point people were being housed at an excess of 220 percent. The U.S. Supreme Court ordered the head of the prisons to start releasing some of these people, and at this time, the new governor came in, and what he came up with was something called public safety realignment. In other words, instead of so many people going to prison, they would be sentenced, instead, to the local county jail.

Now there is only one problem with that. The local county jail was full. It was already full. They were already releasing prisoners early, and so the issue became, “What next? How do we deal with this, without anyone getting hurt by someone who was not ready to come out into society?” And so, the district attorney of LA County must be ready to deal with that.

My ideas are to take the lower level offenders and put them on probation through alternative sentencing court. And that is really the wave of the future with regard to defendants who are suffering from drug addiction, alcohol addiction or mental illness who commit non-serious, non-violent felonies.

Jackie Lacey: I don’t know that the Police Department has ever weighed in on that. I think that everybody, including law enforcement, is interested in seeing recidivism rates drop. Right now in California, when you send someone into the penal institution, they serve their time, they get out on parole and they go back out into the street, there’s a 70 percent chance that they’re going to re-offend within five years and break the law and go back in. With alternative sentencing court – granted, we are talking about people with non-serious, nonviolent cases – the recidivism rate drops to 30 percent with that same time period.

On top of that, we save the taxpayers money. Incarceration costs over $50,000 a year per person. Probation, drug treatment programs, programs that address mental illness, they cost a fraction, a fraction of that. And I think law enforcement understands that we’re running out of money and resources, so we can’t keep spending a lot of money on the criminal justice system.

But second, that it’s about solving the problem forever, ‘cause when you’ve been in law enforcement or the criminal justice system for a long time, sometimes you’ll start to see the same people over and over. And wouldn’t it be great if we could solve the problem forever, if we could get that person back on the right track, help them become a law abiding citizen, a productive member of society. And who in law enforcement could argue with that?

Chief Deputy District Attorney Jackie Lacey was one of two candidates who upset perceived frontrunner Carmen Trutanich in the race to become the next district attorney of the City and County of Los Angeles on Tuesday, June 5. Trutanich placed only third, with 22 percent of the vote, and was thus eliminated from November’s run-off, in which Lacey, who won 32 percent will face Deputy District Attorney Alan Jackson, who won 24 percent.

Jackson is also on record in favor of alternative sentencing, though he is campaigning on his record as a gang crimes prosecutor. As chief deputy district attorney, Lacey was on the team that created alternative sentencing courts for women, people with mental health problems and veterans.