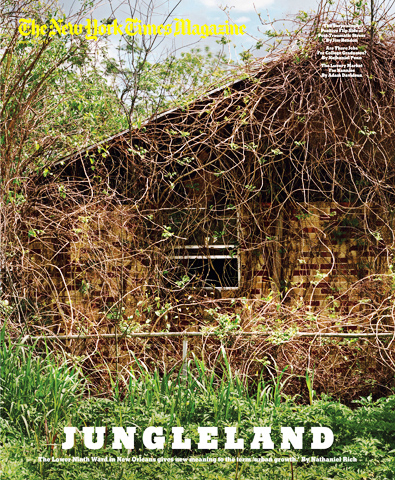 New Orleans – The New York Times Magazine recently ran a story on my home, the Lower 9th Ward of New Orleans, a place one of the most powerful newspapers in the world insensitively dubbed a “Jungleland.” Contrary to the article, residents of this community are not reconciled to life in the wilderness and we don’t live in an untamed mess of overgrowth or in a forgotten wasteland. We are not resigned to anything; we are fighting to revive our community.

While the article cites the city government’s futile attempts to improve the neighborhood, it barely mentions the overall lack of government support before and after Hurricane Katrina and the hard work by committed citizens to improve the community. Yes, many parts of the Lower 9th are overgrown and neglected, but what the article missed is that many are not. Moreover, the untold story is how city, state and federal government abandoned this community.

The Times probably had good intentions – document the bad situation so our community can get help. But while writing about broken people, vacant lots and weeds may be sexy journalism, the community needs the outside world to understand how implicit and unconscious bias caused by a history of racism pummeled us.

After Katrina, millions of dollars flowed into New Orleans, and the Lower 9th was declared the glaring example of what needed rehabilitation. Yet, nearly seven years later, the French Quarter and other areas of tourism and affluence are sparkling, while few improvements have been made in the Lower 9th. In fact, most of the decaying properties cited in the article are owned by the City of New Orleans, not the residents.

Each day, a tour bus cruises the neighborhood showing visitors hurricane damage and poor living conditions. So tour companies are making money off our tragedy and lack of support. The people? We have become mere spectacles dehumanized in the process.

We need the media to shine a spotlight on the fact that the city, state and federal governments turned their backs on this community.

We need the media to shine a spotlight on the fact that the city, state and federal governments turned their backs on this community.

We haven’t given up. Many local organizations and churches are working hard to revitalize the Lower 9th. Unfortunately, the Times article mentions only Brad Pitt’s Make It Right organization as the silver lining in the dark cloud that is the Lower 9th. Churches and other groups may not offer the glitter, clout and financial resources of Brad Pitt, but they labor daily to improve the quality of life here. The Times article included more about the varieties of plant and animal life that have moved in than about the people and organizations fighting to rescue this community.

Before the Lower 9th is judged, consider why it has become a vast wasteland. Before Katrina, nearly 15,000 people lived in this community, which had the highest homeownership rate in the city. The overwhelming majority of these owners were African-American. After the destruction, 75 percent of the residents didn’t return because staying where they had fled was easier than the struggle and expense of returning to rebuild.

Those who did return discovered very little government support. Without nonprofits and thousands of volunteers, more of the Lower 9th might actually be “Jungleland.”

Perhaps the biggest hurdle to restoration is that this community had fewer resources before Katrina. Like other poor, African-American communities nationwide, it had suffered the results of structural racism. The color of our skin had an impact on our schools, access to health care, employment opportunities, housing and basic human rights. When resources are scarce to begin with, it’s hard to recover after tragedy.

For instance, many Lower 9th residents had no homeowners and flood insurance. The Road Home program, designed to help people rebuild, provided payments to homeowners based on pre-Katrina property values, not actual repair costs. So whites who owned homes in affluent neighborhoods received payments that allowed them to rebuild, even though many of their homes incurred less damage than those of people in neighborhoods like the Lower 9th.

A 2008 lawsuit against the U.S. Department of Housing and Urban Development (HUD) alleged such discriminatory practices and was settled last year. HUD was to pay $62 million to Louisiana homeowners, but disposition of that money is unclear.

In another setback, the city didn’t allow Lower 9th residents to come home and start rebuilding until nine months after other New Orleans citizens returned. Faced with increased uncertainty, chaos and financial burdens, people were forced to find work and resettle in their evacuation locations.

What few services were available also caused concern. The social safety net already had gaps but was completely shattered by Katrina. Elderly residents worried about where they could receive health care, parents didn’t know where they would send their children to school and seven years later, the community has no grocery store. Clearly the government didn’t want us back because the original master rebuilding plan had the Lower 9th slated to become green space.

Rebuilding our community may not be profitable, but it’s right. African-American lives in the Lower 9th are just as valuable as those of whites in the French Quarter or Garden District.

The French Quarter wasn’t saved because it sits nine feet higher than the back section of the Lower 9th but because of racism and classism. Black residents of the Lower 9th were deemed expendable long before Katrina.

Often overlooked is the role that structural racism played in destruction of our community. If the French Quarter had been in the same area as the Lower 9th, the government wouldn’t have allowed anything as potentially destructive as a barge to remain untethered with a storm coming. Levees would have been built to withstand a Category 4 hurricane so major tourist attractions wouldn’t be jeopardized.

The French Quarter wasn’t saved because it sits nine feet higher than the back section of the Lower 9th but because of racism and classism. Black residents of the Lower 9th were deemed expendable long before Katrina.

With a new mayor in office, there is at least hope for the future. We’ve had more street repairs in the Lower 9th, but that’s where it ends for now. I’ve heard promises and seen plans, but the community is naturally skeptical. We have become accustomed to broken promises. So we don’t hold our breath. We don’t get excited. We wait and see.

Jenga Mwendo is an urban agriculture community organizer in the Lower 9th Ward of New Orleans and founder of the Backyard Gardeners Network, whose mission is to sustain and strengthen the community. America’s Wire is an independent nonprofit news service run by the Maynard Institute for Journalism Education and funded by a grant from the W.K. Kellogg Foundation. The views expressed by the America’s Wire Writers Group authors are those of the writers and not the Maynard Institute or W .K. Kellogg Foundation. For more information, visit www.americaswire.org or contact Michael K. Frisby at mike@frisbyassociates.com.