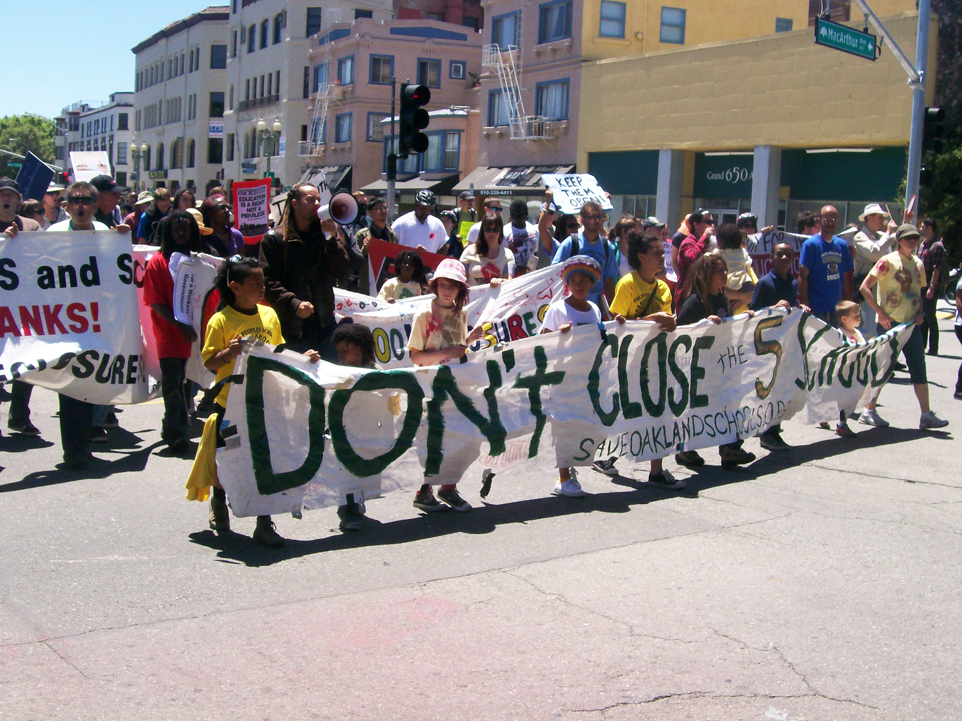 A small but dedicated group of parents, young students, teachers, families and community members have seized Lakeview Elementary School in Oakland, Calif., in response to the Oakland Unified School District’s decision to proceed with closure. Lakeview, Maxwell, Marshall, Santa Fe and Lazear have been on the chopping block all year long.

The proposed 2012-2013 school budget indicates that the district will save $5.76 million dollars as a result of closing these schools, but that figure may be generous, considering that “some of the costs will follow the students to their new schools.” ((Murphy, Katy. “Mission Accomplished? OUSD Structural deficit, closure savings, and other budget questions.” June 25, 2012. See: http://www.ibabuzz.com/education/2012/06/25/mission-accomplished-ousds-structural-deficit-closure-savings-and-other-budget-questions/)) School activists within the Santa Fe community are fighting back through the courts. The Lazear community is fighting back by applying for charter status. The Lakeview struggle proceeds on the campus grounds, via the outdoor encampment and the People’s School for Public Education.

As an educator, activist, Oakland resident and neighbor, I am in support of this action for myriad reasons. I am most interested in the People’s School for Public Education and how this struggle speaks to the displaced students of Lakeview Elementary School.

Lakeview Elementary is located in the Adams Point neighborhood. A neighborhood profile on city-data.com suggests that school-aged children who live in Adams Point are more likely to be enrolled in private schools, compared to other areas of Oakland. In response to the Lakeview protest, OUSD recently stated that Lakeview was considered for closure because only 30 percent of the student body lives in the surrounding neighborhood ((Oakland Unified School District. “OUSD Statement on Lakeview Protest.” June 22, 2012. See: http://publicportal.ousd.k12.ca.us/19941010723359347/blank/browse.asp?A=383&BMDRN=2000&BCOB=0&C=58391)).

While it is certain that there is a problem when neighborhood students are not being served by neighborhood schools, we need to dig deeper. Katy Murphy, Oakland education blogger, has discovered that half of OUSD students attend schools that are outside of their neighborhoods ((Murphy, Katy. “Boundary Change Fallout at Crocker Highlands.” June 7, 2012. See: http://www.ibabuzz.com/education/2012/06/07/boundary-change-fallout-at-crocker-highlands/)). The problem isn’t a local problem in the case of Adams Point; it is a systemic problem in the city of Oakland.

Which students and families in Oakland does Lakeview serve, if it is not serving enough students in the immediate neighborhood? A review of Lakeview’s Student Accountability Report Card shows that children of color comprise 99 percent of the student population.

We have to question why the families of Black and Brown students who live outside of Adams Point have chosen Lakeview. What is lacking in their neighborhood schools? What is desirable about Lakeview for these families? Now, OUSD is displacing about 300 students from the Lakeview Elementary community in order to make office spaces for administrators on desirable property near Lake Merritt.

Additionally, OUSD has left the Adams Point neighborhood with only one public elementary school near the area. In deciding to close Lakeview, OUSD is complicit in local government-sanctioned gentrification. Students of color who live outside of Adams Point have been barred from the community, and current residents who have children (or will have children in the future) will have no choice but to pay more money to transport their children to schools that are further away, or enroll their children in private schools.

Children of color comprise 99 percent of the student population. In deciding to close Lakeview, OUSD is complicit in local government-sanctioned gentrification.

OUSD has acknowledged that Black male students in our city are in crisis. Chris Chatmon leads OUSD’s African American Male Task Force, a project designed to formulate different strategies that will help raise the achievement of Black males in our schools.

We must wonder what Chatmon would have to say about the displacement of hundreds of Black male students from the five elementary schools that recently closed. How will their needs be addressed for the 2012-2013 school year to support their success in their new schools in new communities?

Lakeview, among other schools slated for closure, was recognized for having low suspension rates of Black boys.

On a related front, The Urban Strategies Council has reported upon absenteeism and suspensions in Oakland’s schools and how these factors affect Black male students. Lakeview, among other schools slated for closure, was recognized for having low suspension rates of Black boys ((Urban Strategies Council. “African American Male Achievement Initiative: A Closer Look at Suspensions of African American Males in OUSD.” May 2012. See: http://www.urbanstrategies.org/aamai/index.php/suspensionresearch)). It is a school that engaged students in the classrooms and created a sense of community – something that even OUSD admits in its defense of the decision to close Lakeview.

In theory, OUSD has shown interest in interrupting the school-to-prison pipeline, but in practice, the school closures push our youth out of the schools and into the streets.

Here are some ways in which to support and learn about the Lakeview Sit-In and the People’s School for Public Education:

1. Visit the People’s School: a free summer program for students aged 5-12, offering classes in gardening, physical education, social justice, arts and more. Drop off supplies, volunteer to teach or enroll your children. Parents are welcome to stay and observe classes or assist teachers. Lakeview is located at 746 Grand Ave. in Oakland.

2. Donate to the People’s School for Public Education at https://www.wepay.com/donations/157174.

3. Text “Lakeviewsitin” to 41-411 to get on our text blast service. Email is saveoaklandschools@gmail.com.

4. Get your union, church or community organization to write a letter of support for the Lakeview Sit-In to Schools Superintendent Tony Smith demanding that he re-open or resign! Everyone is urged to contact him either by writing to him at 1025 Second Ave., Oakland, CA 94606, calling (510) 879-8200 or emailing Tony.Smith@ousd.k12.ca.us.

5. Go to the following link to sign a petition in support of the Lakeview Sit-In and to endorse the demands: http://www.ipetitions.com/petition/i-support-the-lakeview-sit-in/.

This story first appeared on DecolonizeOakland.org.