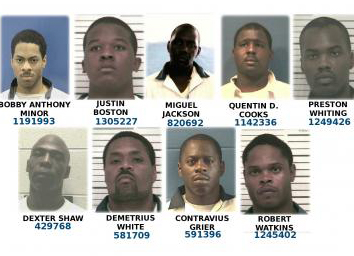 The hunger strike begun on June 11 by nine prisoners at Georgia’s massive Diagnostic and Classification prison, the same place where Troy Davis was murdered last year, continues into its fifth week.

“It has been 33 days since these men have eaten. We must move swiftly or people are going to start dying,” writes Delma Jackson, wife of Miguel Jackson, the prisoner who was beaten with a hammer in retaliation for his role in the December 2010 mass sit-down strike protesting slave labor and other atrocities.

Though reports published in the Atlanta Journal-Constitution based on claims by the Georgia Department of Corrections declaring the strike over, the families and one of the attorneys for the prisoners insist that the nine hunger strikers remain resolved and continue to insist on administrative review of their status, adequate medical care, and access to mail and visitation privileges with their families and attorneys which have been arbitrarily denied them.

“Please do not believe those lies” by the Georgia DOC; “the strike is still in full force,” says Delma Jackson. “Our attorney met with Miguel Jackson, one of the hunger strikers, and he advised Mr. Williams that the strike is in force and has never ended.”

Delma announced: “We are holding a Solidarity Rally Monday, July 16, and this time we are going straight to the source, the Georgia Department of Corrections. We will be demanding a meeting and we will not leave until Commissioner Brian Owens agrees to meet with us. We need your support and prayers for these courageous men.”

Our sources claim that the nine hunger strikers were among the 37 singled out by corrections officials in late 2010 and early 2011 after the peaceful strike by Georgia prisoners of December 2010. They were rounded up, many severely beaten and transferred to close confinement and constant lockdown at Jackson State Prison, where they have remained ever since.

On Monday, July 9, about 30 people showed up at Georgia’s state capitol to visit the governor’s office, where they left letters of support for the hunger strikers.

Through direct and indirect contacts with their families and attorneys and other inmates, the prisoners know that they DO have significant support on the outside. The warden, for example, remarked to Miguel Jackson his surprise that the Georgia Green Party was supporting the strikers.

Your phone calls to the prison warden, the Department of Corrections and the governor of Georgia have already made a difference. 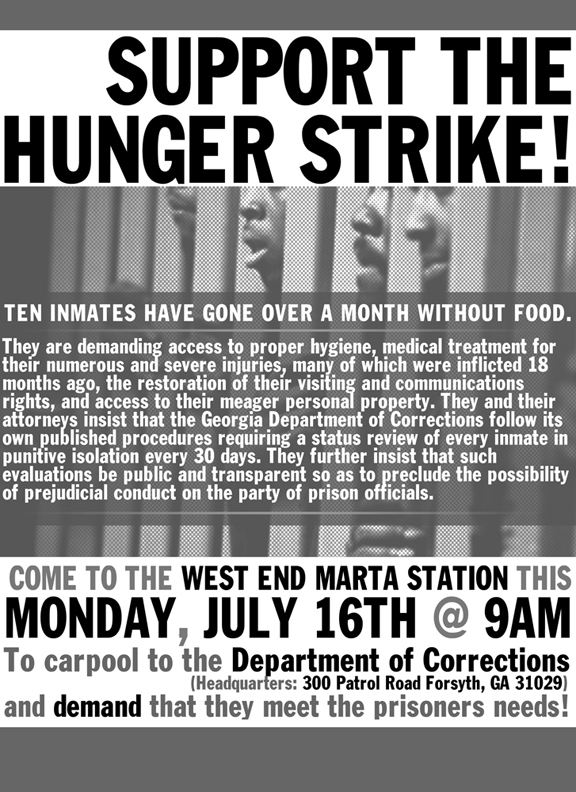 Whether or not the hunger strike lasts much longer, the nine prisoners involved have already demonstrated their unshakable resolve and deserve your continued concern and support – and your calls, which are still needed.

When you call, ask about the men by name and ID number. Here are the names and ID numbers of the nine prisoners now in the fifth week of their hunger strike. They are

Update: Delma Jackson reports: “I just received a letter from Kelvin Stevenson. He and four additional inmates have joined the hunger strike. They are protesting cruel and unusual punishment and inhumane treatment by the administration at Georgia Diagnostics and its staff.” These are the names and numbers of the five prisoners:

Call, fax and email the following:

“We’re also having an international call-in day to support Georgia hunger strikers this Monday, July 16,” says Delma Jackson. “Please encourage everyone to call Commissioner Brian Owens while we are outside the Department of Corrections demonstrating, from 10 a.m. to 1 p.m. ET (7-10 a.m. PT).”

Join the Solidarity Rally: If you’re in the Atlanta area on Monday, July 16, join us as we travel by van and carpool to the headquarters of the Georgia Department of Corrections in Forsyth, Ga., where, along with the families of some of the strikers, we will demand a meeting with Brian Owens, the head of the department. Meet us at the West End MARTA station at 9 a.m. sharp. Some cars will be returning around lunch time; some others will probably stay in Forsyth the whole day.

Sign the petition in support of the Jackson Prison hunger strikers by clicking here.

The prisoners behind those walls have done all they can do. What you can do is sign the petition supporting the demands of the hunger strikers. You can pick up the phone to call and express your concern and support. You can forward this to your email and social networks, family, friends and acquaintances.

Bruce A. Dixon is managing editor at Black Agenda Report, where this story first appeared, and a member of the state committee of the Georgia Green Party. He can be reached at bruce.dixon@blackagendareport.com. Bay View staff contributed to this report. Delma Jackson of the Prodigal Child Project Atlanta can be reached at delma.jackson@yahoo.com or (912) 322-0668. Another major supporter, Pastor Kenneth Glasgow of TOPS (The Ordinary People’s Society), can be reached at topssociety@yahoo.com or (334) 791-2433.