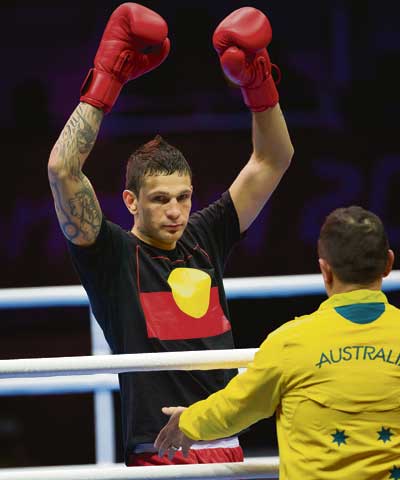 At every event where the fist-raising, 1968 Olympic protestor John Carlos speaks, he always remembers with respect the silver medalist on that platform, the great Australian sprinter Peter Norman. On that fateful day, Norman wore a patch in solidarity with Smith and Carlos and paid a terrible price upon returning home.

Even though Norman was white, or maybe because Norman was white, he became a pariah for daring to stand up for human rights. As Carlos says, “Never forget that there was a time that Australia was as bad as South Africa in terms of its racial policies.” He’s right. At the time there were laws explicitly aimed to dehumanize the Indigenous Australian – often referred to as the Aboriginal – population.

Today, it’s still the third rail of Australian politics to claim pride and solidarity with the nation’s Indigenous people. Damien Hooper is finding this out the hard way. Hooper is an Olympic boxer making major waves both in and out of the ring. The light heavyweight is now a threat to win gold after dispatching highly touted U.S. boxer Marcus Browne.

He’s also a threat to be sent home by the Australian Olympic Committee. Before fighting Browne, the 20-year-old’s ring attire included a black T-shirt emblazoned with the Aboriginal flag. Hooper, who is of Indigenous ancestry, knew that he was breaking the Olympics “no politics rule,” which states that you can only represent your country or approved corporate sponsors. (Worth noting that these corporate sponsors include “politically neutral” entities like Dow Chemical, British Petroleum and McDonald’s.)

After the bout, Hooper had no regrets saying: “What do you reckon? I’m Aboriginal. I’m representing my culture, not only my country but all my people as well. That’s what I wanted to do and I’m happy I did it. I was just thinking about my family and that’s what really matters to me. Look what it just did – it just made my whole performance a lot better with that whole support behind me. I’m not saying at all that I don’t care (about a possible sanction). I’m just saying that I’m very proud of what I did.”

The next day, the International Olympic Committee told the Australian Olympic Committee that they better deal with Hooper or face the consequences. Practice for the team was halted in very public fashion and Hooper was called in to meet with Australian Olympic chief Nick Green. Green emerged from the meeting to inform the media that the boxer had “looked him in the eye” and was “extremely apologetic … He has learned a lesson and he will not do it again.”

But what lesson is being learned? What is being taught not only to Hooper but also to Australia? The Aboriginal flag is recognized as an official Australian flag, but it’s not recognized by the International Olympic Committee. The IOC is doing nothing less than asserting its sovereignty over the Australian team, and this is drawing peals of protest at home. 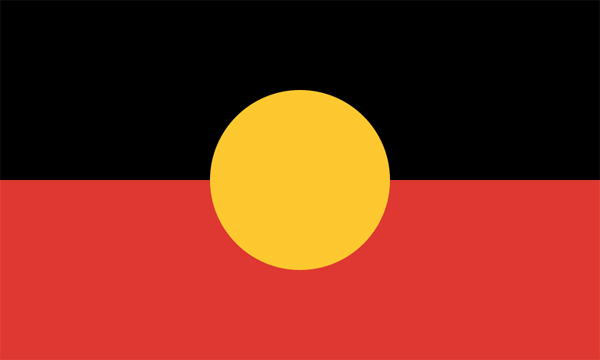 “I take my hat off to him for that stance,” Mundine said. “It takes a person with big balls to make a big stance like that. I’ve got his back, all day every day, because he’s in the right.”

Phil Cleary, an Australian politician and activist said: “Unlike the imperial flags draped around tearful young athletes, the Indigenous flag has no history of occupation of foreign territories. Sadly, it’s the representation of stateless people, a people about whose history we dare not speak. Banning this flag is so pathetic it’s funny.’’

The National Congress of Australia’s First Peoples has also thrown their support behind Hooper “for being proud of who he is and where he came from.”

The Congress recalled that Australian 400 meter gold medalist Cathy Freeman held both flags following her victory at the 2000 Games in Sydney. Jody Broun, co-chair of the Congress, said, “I’m not aware of any formal action by any Olympic body when images of Cathy Freeman were beamed around the world after her 400 meter gold medal win. Those images gave an immeasurable boost to Aboriginal people and told the next generation it is possible for them to also be the best in the world.”

The degradation of Damien Hooper sends a very different message, one in line with what Peter Norman was forced to suffer in 1968. As Mark Twain said, “History doesn’t repeat itself. But it does rhyme.”

Dr. John Carlos is best known as the man who, along with Tommie Smith, raised his fist from the medal stand at the 1968 Olympics. The bronze medalist is also someone who had a decades-long friendship with the Australian silver medalist on that 1968 platform, Peter Norman. I wanted to get his feedback on this year’s Australian athlete who has courted controversy, boxer Damien Hooper. He, as always, delivered his views straight, with no chaser.

DZ: Damien Hooper, an Australian boxer of Aboriginal descent, wore a flag on his shirt that celebrated his Indigenous Australian heritage and was threatened with expulsion from the games. What are your thoughts about Mr. Hooper?

JC: Here’s a young man who puts a shirt on to acknowledge his ethnicity, the forgotten people of Australia, and it appears the Olympic Committee might want to continue for them to be forgotten. He chose to stand up and say, “Not only do I represent the people of Australia but I represent the Aboriginal people specifically.” I feel that he feels that his people never really got the respect that they deserve, and have never really been given credit as the founding fathers of their nation.

DZ: If you could say something directly to Damien Hooper, what would it be?

JC: I have the utmost respect for him. I admire him, and I think he should stand firm. I would say, “Don’t let anyone dictate as to how you should live your life.” Now, it would be great if they were paying him a handsome fee for going to the Olympic Games, and when I say a handsome fee, I’m talking about coming from the International Olympic Committee. I mean, they walk away with a bundle of money.

It’s almost as if these individuals are worthless other than the fact that they can win a medal and promote the rings at the Olympics. We all want to promote the Olympic games, but we have to realize that the Olympic organizers promote what they would like to promote, and they feel like you have no concern or no value as to who you are and where you came from.

DZ: You must’ve had a flashback, when you heard about this story, to the late, great Peter Norman. Tell us a little bit for those who don’t know, first of all, who was Peter Norman, and what connections do you see in terms of what Peter Norman went through and what Damien Hooper is going through?

DZ: What does it also say about Australia? They like to talk about how far they’ve come since those days in 1968 and yet if you look at things like the prison population, the oppression of the Aboriginal people in Australia, that’s actually worse now than it was 50 years ago. What does it say about Australia that their own Olympic committee would come down so hard on Damien Hooper who is wearing what is actually an accepted flag in his country?

DZ: What does it say that if Damien Hooper had chosen to wear a shirt that said McDonald’s on it, he would not have gotten in trouble because that’s an official Olympic sponsor, or a shirt that said British Petroleum or Dow Chemical. Yet wearing an Aboriginal flag is somehow this horrible scandal? What does that tell us about the International Olympic Committee?

DZ: Isn’t that what you say: “The Olympics are every four years because it takes them four years to count the money”?

JC: To count the cash. That’s absolutely right. One day I believe we’ll see a day when individuals will have McDonald’s or British Petroleum on their chests as opposed to having their country’s flags on their chests.

Dave Zirin is the author of “The John Carlos Story” (Haymarket). Receive his column every week by emailing dave@edgeofsports.com. Contact him at edgeofsports@gmail.com. This story first appeared in The Nation, the first part at http://www.thenation.com/blog/169178/damien-hooper-sanctioning-anti-racist-olympic-rebel# and the second part at http://www.thenation.com/blog/169303/dont-let-anyone-dictate-how-you-should-live-your-life-john-carloss-advice-olympic-boxer-.