There are two kinds of political athletes. The first, and most memorable, are athletes who engage in the explicit politics of protest. This tradition is marked by Muhammad Ali saying, “I ain’t got no quarrel with them Vietcong.” It’s Billie Jean King marching for Title IX. It’s Curt Flood saying he refused to be a “well paid slave.” It’s John Carlos and Tommie Smith raising their fists in the name of civil and human rights. 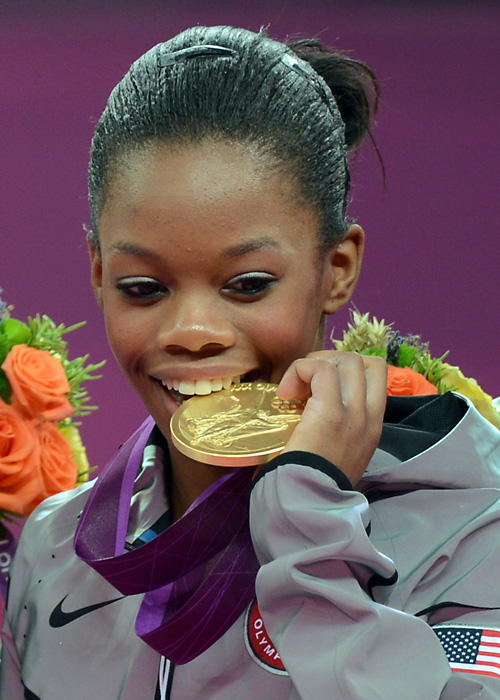 But then there is a different kind of athletic politics: the politics of representation. That’s Jackie Robinson the moment he took the field to break baseball’s color line. That’s Martina Navratilova, all ropey muscles, forcing the world to confront a more powerful kind of woman athlete. That’s Compton’s Serena and Venus Williams dominating their country club sport.

Whether or not these athletes embraced the burden, they carried the aspirations and expectations of countless others. We can now add Gabby Douglas to their ranks. The 16-year-old from Virginia Beach is now the first African-American woman as well as the first person of color to win gold in the gymnastics individual all-around competition. She is also the first U.S. gymnast in history to win both individual and team gold at the same Olympics.

Douglas’s journey is as unique as her triumph: one marked by having to navigate the racial segregation that defines so much of the United States. At 14, Douglas left her mother, three siblings and working-class Virginia Beach community to move to West Des Moines, Iowa, so she could train with renowned Chinese coach Liang Chow.

In Iowa, Douglas lived with a host family of strangers in a nearly all-white community and thought she might be the only Black person in the state. In the very white world of gymnastics, Douglas also stood out. At most meets she would be the only person of color performing. Douglas was home-schooled in Des Moines by her host family, adding to this sense of isolation. Homesickness meant crying herself to sleep and calling her mother in Virginia Beach, floating the idea of coming home. 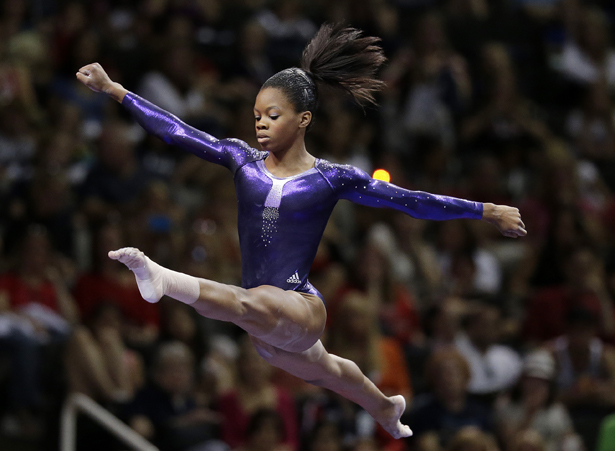 But Douglas was indomitable and developed a reputation for the ability to actually seem like she was flying on the uneven bars, earning the rather unfortunate nickname “The Flying Squirrel.” She also had a reputation as someone with potential, but a cut beneath the best gymnasts in the world. Marta Karolyi, the grim U.S. national team coordinator who bestowed the “Flying Squirrel” nickname on Douglas, saw her as “an average good gymnast.”

Douglas, however, wouldn’t be discouraged. Her sense of comfort and confidence is visible in her smile, which is as striking as one of her dismounts. Anyone watching women’s gymnastics sees that many of the contestants look like hostages to screaming parents, rage-aholic coaches and their own unhappiness. Gabby Douglas actually looks happy to be there and through force of personality is congenitally unable to be invisible. This also has political repercussions, powerful enough that the largely sheltered 16-year-old seems to sense what she could mean. 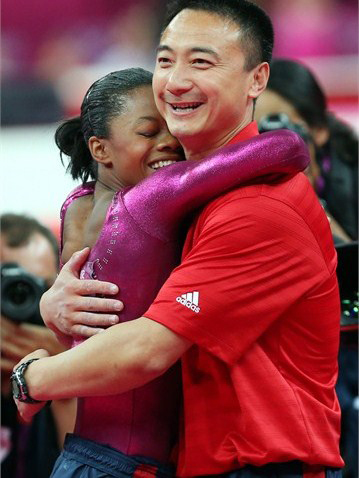 As she said to the New York Times in June: “I have an advantage because I’m the underdog and I’m Black and no one thinks I’d ever win. Well, I’m going to inspire so many people. Everybody will be talking about, how did she come up so fast? But I’m ready to shine.” Shine she did.

Dominique Dawes, the great African-American gymnast who won team gold in 1996, told USA Today’s Christine Brennan: “I am such a nervous ninny. I feel like Gabby is my child or something. I am so anxious for her to win. I know it will have an enormous impact on encouraging African-Americans and other minorities to go into the sport of gymnastics.”

This is certainly possible. But far more important is the impact Gabby Douglas could have in making people not feel defeated by racism, segregation or even something as simple as loneliness. Now all she needs is a better nickname. This is no one’s Flying Squirrel. With apologies to Paul Pierce, Gabby Douglas is “the Truth.”

Dave Zirin is the author of “The John Carlos Story” (Haymarket). Receive his column every week by emailing dave@edgeofsports.com. Contact him at edgeofsports@gmail.com. This story first appeared in The Nation.

Special to the NNPA from the LA Watts Times 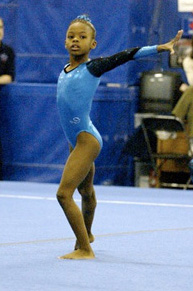 From the moment she was a pint size 3-year-old toddler and her sister Arielle taught her how to do a cartwheel, Gabrielle “Gabby” Douglas wanted more. So on her own she began doing cartwheels on one hand.

Douglas participates in a sport that is not just void of African Americans; it rarely attracts them because from an economic standpoint in many instances, it’s not feasible.

Gymnastics is one of those elite individual sports that require a lot of time and a whole lot of money, but if you are really good as Douglas has proven to be, you can push your way onto the Olympic stage.

Douglas, born in Virginia Beach, Va., didn’t just qualify for the London Olympics; she has taken the Olympics and the sport by storm, leading the American women team to a team gold medal on July 31 and coming out on top Aug. 2 in the individual all-around category. 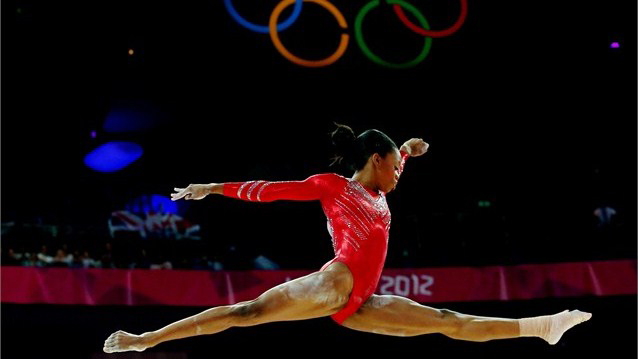 It was only the second time in Olympic history that American women had captured team gold. The U.S. women’s gymnastics team won its first gold medal since the 1996 Atlanta Games, and thanks in large part to the girl they call Flying Squirrel, the 2012 team is in the history books again.

After reigning world champion Jordyn Weiber was knocked out of the finals for the all-around title two days earlier by Douglas, Gabby then turned her attention to the team finals and as usual was dynamic and courageous posting an eye popping 15.966. Again she bested Wieber, who had set the tone by earning 15.933 points.

Douglas qualified at the U.S. Olympic trials on June 28 through July 1 and thus joined the ranks of other African-American Olympic gymnasts, including Dominique Dawes and Betty Okino, who won, along with their U.S. teammates, the Olympic team bronze medal in 1992, and Tasha Schwikert, who joined Dawes on the U.S. team in 2000.

The road to the Olympics has been a challenging one.

This daughter of Timothy Douglas and Natalie Hawkins had to move from her family in 2012 to West Des Moines, Iowa, so that she could receive the essential training to be an elite gymnast. 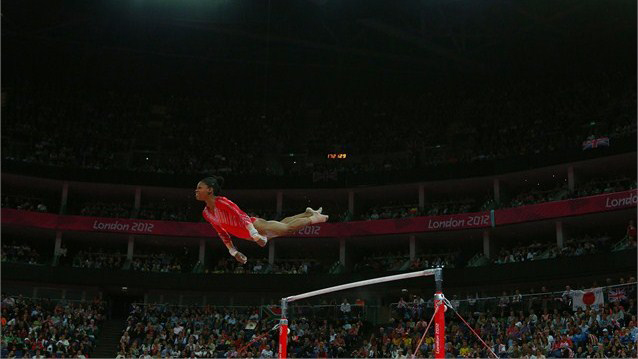 It was in Iowa where she trained with 2008 Olympic coach Liang Chow to hone her gifted skills. She lives with a host family, but the separation from home and family has been a difficult adjustment for her.

Douglas had demonstrated early on that she would be special, winning the 2004 State Championship title in Virginia.

Gabby, as she is affectionately called, burst onto the nation scene in 2010 at the Nastia Liukin SuperGirl Cup in Massachusetts, where she finished fourth in the all around.

From there it was on to Chicago, where she placed third on the balance beam, sixth on the vault and ninth in the all-around junior division.

She then went on to the 2010 U.S. Junior National Championships and captured a silver medal on balance beam, placed fourth all around and on vault, and tied for eighth on floor exercise.

Douglas competed at in the 2010 Pan American Championships in Guadalajara, Mexico, where she won the uneven bars crown, and she also won a share of the U.S. team gold medal. 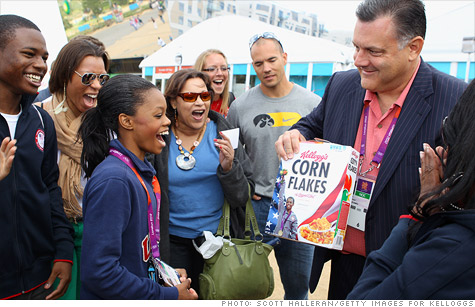 She has competed at the world famous Madison Square Garden and soon will be a household name after her monumental achievements at the London Olympics.

Gabby’s accomplishments at the London Olympics might be greater than any African American Olympian, including the highly decorated USA men basketball team.

That glowing smile, those elegant and graceful moves in a sport that is placed on a shelf too high for many to reach – she didn’t just get there; she stands alone with two Olympic medals draped around her neck for the world to see.