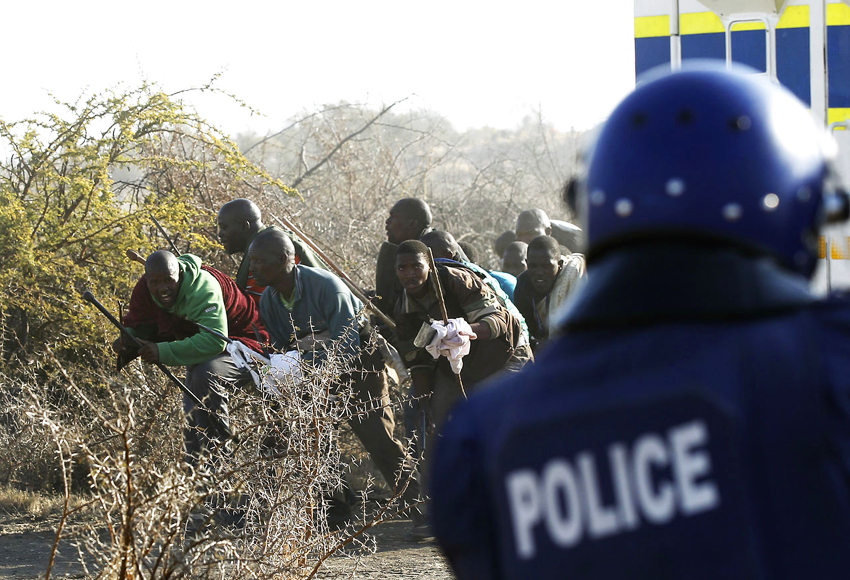 Al Jazeera reports: “South African police killed 34 people (now estimated at 45) in a shooting at a mine in North West province, the country’s police chief says.

“Officers shot at the workers who were protesting on Thursday afternoon over pay at the Lonmin platinum mine in Marikana, some 100km northwest of Johannesburg.

“The incident, which police said was an act of self-defense, appears to be one of the bloodiest police operations since the end of white-minority rule in 1994 in Africa’s biggest economy. …

“In a front page editorial, The Sowetan newspaper questioned what had changed since 1994. ‘It has happened in this country before where the apartheid regime treated black people like objects,’ the paper said.”

Update: The Times of Johannesburg reports Aug. 18 that the miners are even more defiant in the wake of the massacre: “Makhosi Mbongane, a 32-year-old winch operator, said mine managers should have come to the striking workers rather than send police.” Strikers are demanding monthly salary raises from R5,400 ($648) to R12,500 ($1,500), according to CNN. The Times continues: “Mbongane vowed that he was not going back to work and would not allow anyone else to do so either.

“‘They can beat us, kill us and kick and trample on us with their feet, do whatever they want to do, we aren’t going to go back to work,’ he told The Associated Press. ‘If they employ other people, they won’t be able to work either. We will stay here and kill them.’ …

“The shootings ‘awaken us to the reality of the time bomb that has stopped ticking – it has exploded,’ The Sowetan newspaper said in a front-page editorial Friday. ‘Africans are pitted against each other … They are fighting for a bigger slice of the mineral wealth of the country.’”

Mine operator Lonmin is the world’s third largest supplier of platinum. Most of its 28,000 employees work at the Marikana mine, according to CNN.

Solidarity with mine workers at Marikana Platinum 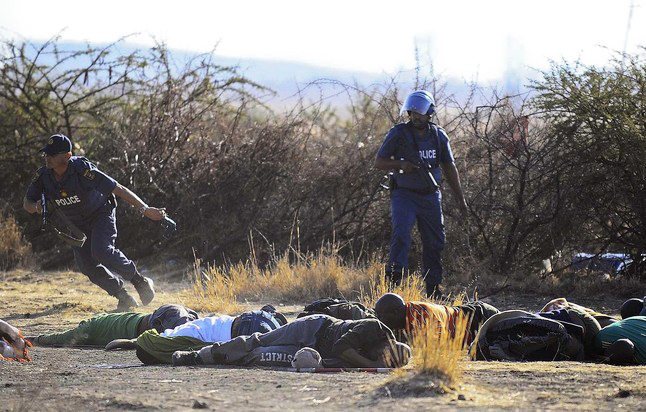 Aug. 17, 2012 – Abahlali baseMjondolo are deeply shocked by the murderous cruelty of the South African police – and those that give the police their orders – at the Marikana Platinum Mine in the North West. The killing of more than 40 mine workers yesterday by the SAPS (South African Police Services) is immoral and brings great disgrace on our country. There were other ways and much better ways to handle the situation. Yesterday will always be remembered as a dark day in the long history of oppression in South Africa.

We wish to express our solidarity to all the families of the workers that have been killed and injured. We share your sorrow. You are not alone. We carry our pain together. Your children may not grow knowing their fathers but they will not grow alone. We have to care for each other and stand together as we struggle for a world that puts human beings first and treats all human beings equally.

We wish to express our solidarity to all struggling workers. We face the same system that makes some people rich and others poor. We face the same government that refuses to recognize our humanity, which tries to force us to the margins of society and which represses us when we resist.

Your children may not grow knowing their fathers but they will not grow alone. We have to care for each other and stand together as we struggle for a world that puts human beings first and treats all human beings equally.

The ANC (African National Congress) have shown no regard for the people of this country. They are putting us in transit camps and trying to keep us in bantustans. They are leaving us to burn in our shacks every winter. They are beating us in the police stations. They are shooting us in the streets. Millions of us cannot find work.

A government that kills its citizens has lost all moral right to govern. What happened yesterday is no different from the killings of the apartheid government. 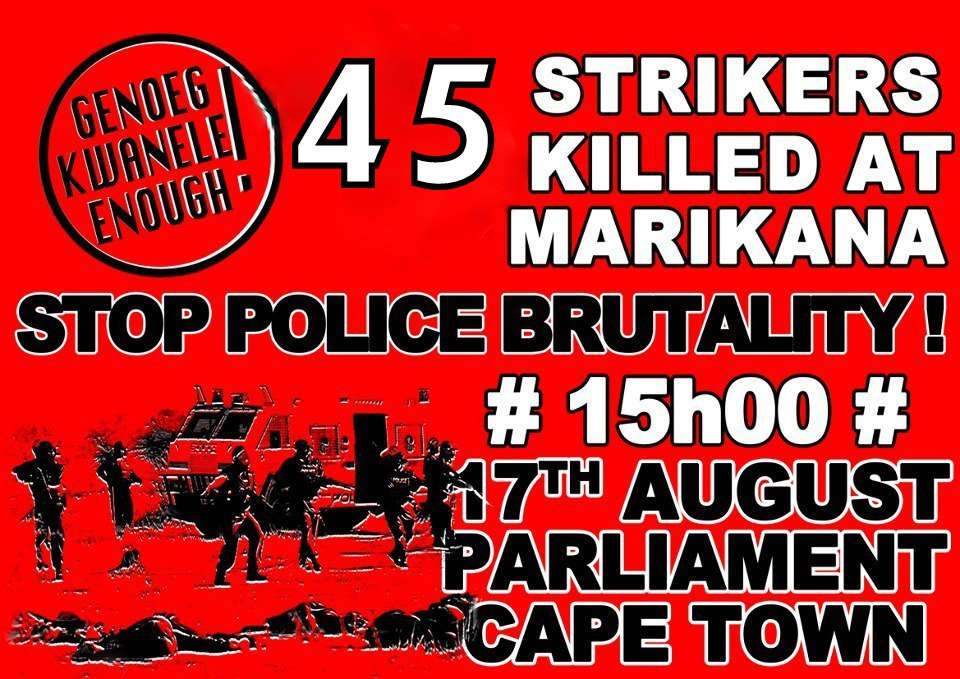 It has always been our call that real freedom and democracy are still a dream for the poor and the working class. All we see is politicians enriching themselves by stealing public funds that are meant to better people’s lives.

More than 25 people have been killed by the police during protests since 2000. Tebogo Mkhonza in Harrismith, Monica Ngcobo in Umlazi and Andries Tatane in Ficksburg are just three of the people that have been murdered in the streets by the police. Activists have been tortured and assassinated.

Last year Nigel Gumede, the head of Housing in eThekwini, publicly said that the ANC was at war with our movement and threatened to kill S’bu Zikode. Senior people in the ANC have set a clear tone for the rest to follow. 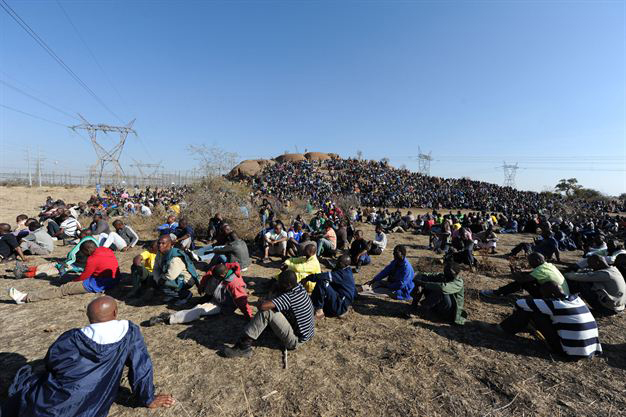 We have to recognize that there is a war against the poor in this country. We did not want this war, but it has come to us. Today no one can deny that a war is being fought against the poor.

We have to recognize that there is a war against the poor in this country. We did not want this war, but it has come to us.

The red ants and the police are not here to serve the people. They are here to drive the poor out of the cities, contain us in the human dumping grounds and repress our struggles.

We are aware of the dangers of the South African politic when struggling citizens demand real freedom and democracy. Activists are living under serious threats all over the country.

We are aware of the time bomb that the shack dwellers in this country are sitting on. We have always warned, from the time when we first started to organize, that the anger of the poor can go in many directions. The dangers that we face can come from how people respond to oppression as well as from oppression itself.

There is more protest in South Africa than anywhere in the world. But the government takes no notice of the people. It responds by militarizing the police.

There is more protest in South Africa than anywhere in the world. But the government takes no notice of the people. It responds by militarizing the police. It responds by talking about third forces. The local party structures send out armed men in the night.

The government wants to make the anger of the people criminal and treasonous. It works behind the scenes to support the armed men that invade our homes and threaten us and our families. We have to accept that this government does not care about us. We do not count to it. When we ask to be heard, we are treated as criminals and traitors. 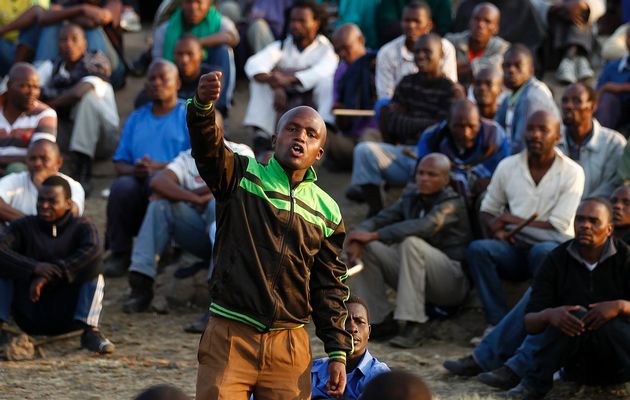 Abahlali baseMjondolo of the Western Cape will march to the National Parliament in Cape Town at 3 p.m. this afternoon together with comrades from other organizations. In Durban we will hold conversations with different structures of our movement and our comrades in other organizations, as well as the churches, to plan a way forward.

Global Peace and Justice Auckland in New Zealand will be marching to the South African embassy in Auckland at 1 Kimberly Road at 2 p.m. today. Our comrades in Cape Town and New Zealand march with our solidarity.

A politic of war has come to us. We have no choice but to resist. But we must resist with our own politic, which is a militant people’s politic that starts and ends by honoring the dignity of all people.

Protest in New Zealand against the massacre of striking mine workers 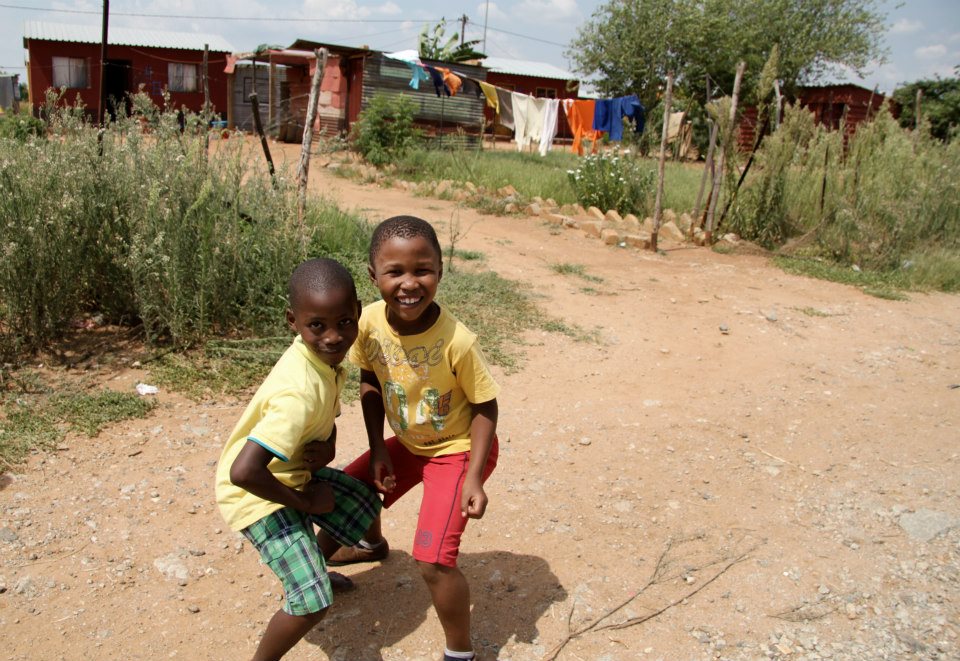 Aug. 17, 2012 – For the first time in 20 years, New Zealanders will picket a South African government institution in Auckland tomorrow in protest at yesterday’s killing of striking mine workers by South African police.

The appalling scenes where up to 18 workers (later reported to be 45) were shot dead are reminiscent of the darkest days of apartheid – the Sharpeville massacre of 1960 and the murder of Black school children in Soweto in June 1976 come immediately to mind.

The precise details of the killings are unclear, but irrespective of this the blame lies squarely with the ANC government which has been in power for 18 years while conditions have become worse for most South Africans.

The mineworkers strike and the struggle for decent housing, health, incomes and education are the same struggles the ANC once supported but have turned their backs on since gaining power.

They have betrayed the core principles of the historic “Freedom Charter” and instead followed free-market economic policies which has meant little change in the lives of the poorest South Africans while a wealthy elite, which includes a few Black faces now, has become obscenely rich.

Race-based apartheid has been replaced with economic apartheid.

New Zealanders didn’t protest on the streets to pave the way for a small number of Black millionaires to be created at the expense of the majority.

Race-based apartheid has been replaced with economic apartheid.

Last year in a withering attack on the ANC, Bishop Desmond Tutu said the ANC government was in some ways worse than the old apartheid regime and told South African President Jacob Zuma that the day would come when people would pray for the defeat of the ANC.

For many, that day can’t come soon enough.

The picket will be held outside the new South African consulate in Auckland at 1 Kimberley Road, Epsom, Auckland, from 2 p.m. tomorrow, Saturday, Aug. 18.

Included on the picket line will be some veterans of the anti-apartheid struggle.

John Minto, spokesperson for Global Peace and Justice Auckland (GPJA), can be reached at johnminto@orcon.net.nz.

Dying for a raise

The Marikana mine workers massacre: a massive escalation in the war on the poor

Sadism in the cell