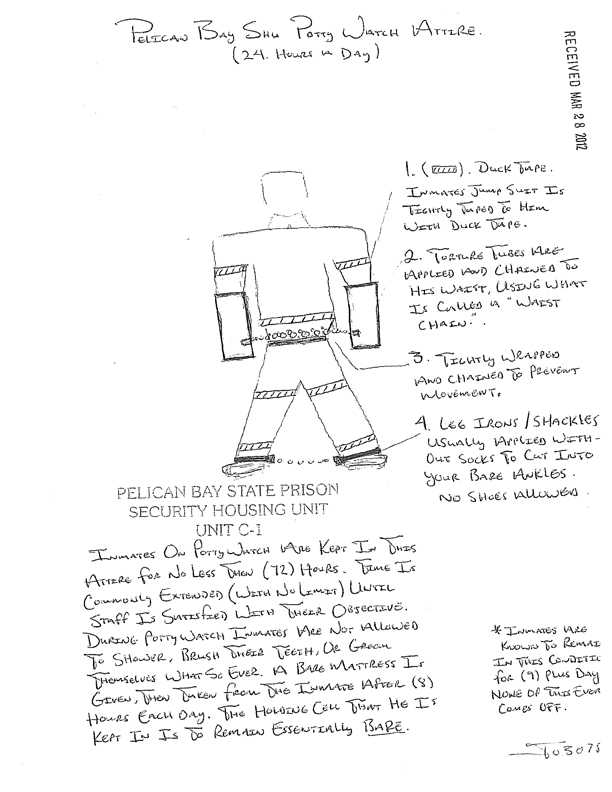 Readers of the Bay View are all too familiar with the horrendous conditions that characterize the California prison system – but just when it seems like things can’t get any worse, a new practice comes to our attention that is shocking and humiliating. I am referring to a practice called “contraband watch,” or “potty watch” by people inside, in which a prisoner’s excrement is examined for items perceived to be “contraband.”

Contraband has existed since prisons were invented in the 1790s, and the definition of what constitutes illegal items inside institutions changes over time and is sometimes utterly arbitrary. The creativity of people held in isolated situations to turn many ordinary objects into something completely different, and even sometimes dangerous, is legendary. Kool Aid becomes paint. Raisins become wine – until access to all dried fruit was taken away. Various kinds of bindings have become weapons.

But weapons are not safe to swallow, so it would be hard to make the case that contraband watch is trying to find sharp objects. Drugs are ingested, at times. The claim is that sim cards are too, and cell phones are perceived to be a serious form of contraband.

But in the case of contraband watch, the cure is infinitely worse than the disease. Prisoners are put into clothing that is taped shut to their bodies. Then their hands and feet are shackled, and their hands are encased in PVC tubes up to the elbows, so that they can’t use them for any purpose, on the grounds that they must be prevented from interfering with any objects that could be excreted.

They are under observation for the entire time they are on CW, a minimum of 72 hours, and if the tubes are removed from one hand in order, for example, for the prisoner to eat, three guards are assigned to watch him. Three guards are again required if the prisoner does wish to have a bowel movement, which is only allowed over a bucket with the plastic bag over it. The contents are then examined.

The prisoner must produce three clean bowel movements in order to be released from CW, but if he/she manages to do this before the 72 hours are up, there is no assurance of removal from this form of torture, before the three days expire. Indeed, if the three bowel movements aren’t forthcoming, or aren’t considered “adequate,” or the prison simply believes some kind of contraband is still on its way, the prisoner is subject to an additional three days, even as long as nine days under these conditions, until the Department of Corrections and Rehabilitation deems the experiment over.

Prisoners are put into clothing that is taped shut to their bodies. Then their hands and feet are shackled, and their hands are encased in PVC tubes up to the elbows, so that they can’t use them for any purpose, on the grounds that they must be prevented from interfering with any objects that could be excreted.

This practice clearly constitutes torture. There can be no legitimate “penological objective” to contraband watch unless unbridled humiliation is considered therapeutic. What is even more shocking is the frequency with which this punishment is imposed and how widespread it is in prisons throughout the state. Since each prisoner requires an individual cell (4-by-6, according to the reports we have received), the numbers placed in them at any given time is limited, but prison officials have been asking for more cells to be dedicated to this practice. When you add the cell space and the intense supervision, usually requiring overtime by guards, the cost to taxpayers is extremely high.

The descriptions we have received from prisoners around the state are eerily consistent: The cells are tiny and mattresses are only issued at night, then removed at 6 a.m., leaving someone to stand or sit on the hard floor. Blankets are often not issued, and in any case sleeping with the PVC pipes is extremely difficult. Urination can only occur into a plastic jug, held by a guard, and the jug is used by everyone in the unit, without proper sanitation. Bowel movements, over the bucket, sometimes occur in the middle of the hallway, in plain view. Drinking water is only available through a straw, threaded through the slot in the door.

This practice clearly constitutes torture. There can be no legitimate “penological objective” to contraband watch unless unbridled humiliation is considered therapeutic.

All letters we have received report on very unsanitary conditions, no changes of clothes or opportunities to shower or even wash one’s hands. Sometimes alcohol wipes are issued, but not consistently.

Is there an end in sight?

The American Friends Service Committee and other advocacy groups have been working with legislators to put an end to this practice. The Senate Office of Research, among others, has been investigating and has pressured the department to make changes. They believe that an agreement has been reached to require a court order to place someone on contraband watch longer than three days. 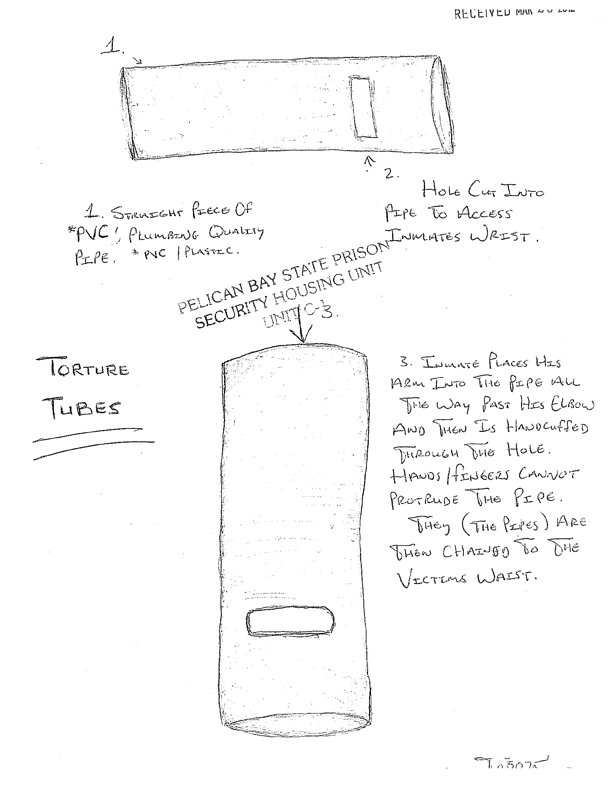 The inspector general is to receive weekly reports on the practice, which are also supposed to be posted on the department’s website, though these reports are difficult to find. Neither do they provide all the information one would want, such as the race of people subjected to this humiliation, source of the “information” leading to referring someone etc.

We have not been able to determine how often “contraband” is actually found in this process, or what, specifically, the objects are. What could actually constitute so serious a violation as to warrant such treatment? We would say it cannot be justified. No drug use – probably the most common ingested substances – could justify risking someone’s health, including psychological health, and ability to sleep, move or take care of the most basic hygiene needs.

New requirements thought to be agreed to for administering CW include higher and higher levels of approval, the longer the punishment is being imposed. The first 72 hours must be approved by a captain. The second by a warden. Seven days or more require approval of the director or deputy director of Adult Institutions or Facility Operations – in other words someone in Sacramento.

However, such authorizations easily become routine in the CDCR, in our experience. A court order should be the minimum requirement. “Confidential information” should not trigger treatment as drastic as this, yet it is often the excuse used. Such information means that a prisoner has told correctional personnel that someone is in possession of contraband. Because it is confidential, the accused person has no ability to challenge the accusation.

We have not been able to determine how often “contraband” is actually found in this process, or what, specifically, the objects are. What could actually constitute so serious a violation as to warrant such treatment?

We received one report that a prisoner at Folsom, observed having a prolonged kiss in the visiting room, was placed on contraband watch for over a week, resulting in rashes on his body from chafing and lack of air to the skin. While on CW, prisoners are often not allowed to shower or otherwise clean themselves, even though this violates the written regulations. Rarely is an actual x-ray, showing some kind of metal working its way through the body, produced to justify CW.

Yet in our reading of regulations dated May 2012 governing these practices, they act as if this process is a less intrusive form of cavity searches. “This natural digestive process shall be used as an alternative to forcible intrusion into body cavities or surgery, when a medical doctor determines the natural method is feasible and does not pose a hazard or clear and present danger or imminent threat to the inmate’s health and safety.”

As word of potty watch spreads around the country, California’s reputation has deteriorated in the eyes of civilized society. Readers are encouraged to contact their state legislators and demand an immediate end to contraband watch. There really are no interim measures to a practice so depraved. Court orders are a minimum step, but in our view it must be stopped entirely.

If nothing else, this behavior confirms the fact that closed systems like the prison system breed levels of cruelty never seen before. The public must be made aware. This is also a cautionary tale, told many times in history, that if humans have total control over other humans, even to the point of controlling our most intimate bodily functions, abuse is bound to follow.

As word of potty watch spreads around the country, California’s reputation has deteriorated in the eyes of civilized society. Readers are encouraged to contact their state legislators and demand an immediate end to contraband watch.

These conditions must be exposed. We, the public, must put a stop to it or there is real danger of spinning out of control as a society.

Laura Magnani, assistant regional director of the American Friends Service Committee, 65 Ninth St., San Francisco CA 94103, can be reached at lmagnani@afsc.org. She has worked on prison issues for over 30 years.