Time to clean up one of the UN’s biggest crimes

Haitians have had a long and arduous struggle just to achieve the rights that most people in the rest of the hemisphere have enjoyed. From the revolution of Haitian slaves that won independence from the French in 1804 through the U.S. occupation (1915-1934), the Duvalier family dictatorship (1957-1986) and the last 20 years of devastating foreign intervention, the “international community” just hasn’t seen Haitians as having the same basic human rights as people in other countries.

They still don’t, perhaps because Haitians are too poor and Black. While the horrific earthquake of January 2010 brought international sympathy and aid – much more pledged than delivered – it didn’t bring a change of attitude toward Haiti. 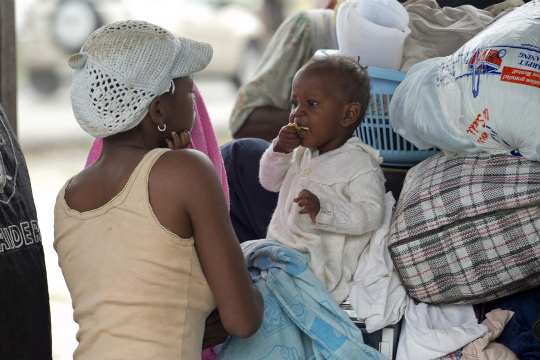 This is perhaps most clear in the failure of the United Nations to take responsibility for the additional devastation they have brought to Haiti with the deadly disease of cholera. Since the outbreak began in October 2010, more than 7,445 Haitians have died of the disease and more than 580,000 have been infected, and these official numbers are an underestimate. It is now firmly established by a number of scientific studies that U.N. troops brought cholera to Haiti by dumping their human waste into the country’s water supply.

This is gross negligence that would have landed them a multi-billion dollar lawsuit if they were a private corporation – or even criminal prosecution. But the U.N. has so far refused to even admit responsibility; although Bill Clinton, who is the U.N.’s special envoy for Haiti acknowledged in March that the U.N. brought cholera to Haiti.

“As cholera was brought to Haiti due to the actions of the U.N., we believe that it is imperative for the U.N. to now act decisively to control the cholera epidemic,” said Congressional Democrats in an appeal to Susan Rice, the U.S. ambassador to the United Nations, a few weeks ago. Despite the fact that the letter was signed by the majority of Democrats in the U.S. House of Representatives, it was ignored by the media in the United States. And Rice has yet to respond.

But controlling and putting an end to the epidemic is the least that the U.N. can do for Haiti, having caused this disaster. We know that it can be done, too – as it has in many other countries – by building the necessary infrastructure so that Haitians can have access to clean drinking water. The cost has been estimated at about $800 million, or the amount that the U.N. spends on keeping its soldiers there for a year.

Haiti has no civil conflict or peacekeeping agreement. The U.N. military mission in Haiti (MINUSTAH) therefore has no legal or legitimate basis – on the contrary, it was sent there in 2004 to occupy the country after Washington and its allies organized the overthrow of the country’s democratically elected president.

“As cholera was brought to Haiti due to the actions of the U.N., we believe that it is imperative for the U.N. to now act decisively to control the cholera epidemic,” said Congressional Democrats.

Besides bringing the cholera epidemic to Haiti and wasting billions of dollars, MINUSTAH troops have committed serious abuses, from killings of civilians to sexual abuse. Last September Uruguayan troops were caught on video sexually assaulting an 18-year-old Haitian man. In the latest MINUSTAH sexual abuse scandal, Pakistani troops were found guilty of raping a 14-year-old boy; they received a year in prison from a Pakistani military tribunal. Perhaps more damning for the U.N. in this case is that higher U.N. officials have been implicated by Haitian authorities as having attempted to cover-up the crime.

No wonder more than 70 percent of Haitians responding to a recent poll said they wanted MINUSTAH to leave within a year. The U.N. can use the money currently wasted on this military force to rid the country of cholera. Then, at least, they will have cleaned up one of their biggest crimes in the country.

Mark Weisbrot is an economist and co-director of the Center for Economic and Policy Research. He is co-author, with Dean Baker, of Social Security: the Phony Crisis. This story first appeared on Counterpunch.