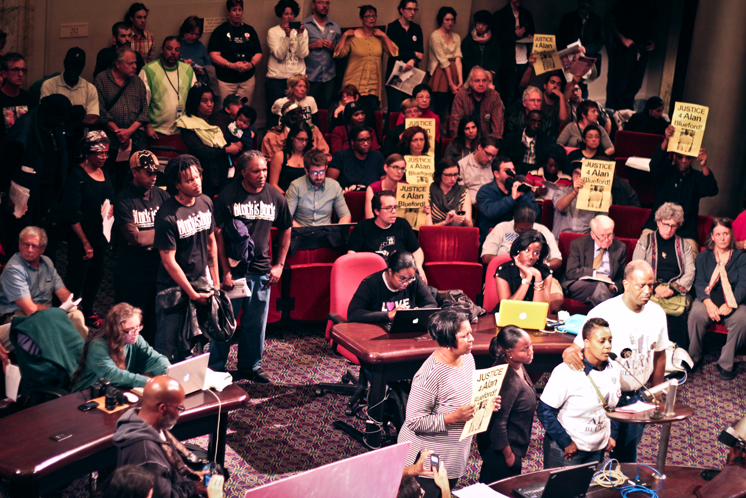 On Sept. 18, many people in the Bay Area came together to support one family’s struggle for justice. Hundreds of supporters joined Jerilynn and Adam Blueford and many of their relatives as they confronted Oakland City Council to demand that it pressure the police department to investigate the death of their son, Alan.

On May 6, Alan Blueford was shot in the back and killed by Miguel Masso, an Oakland cop with a history of racist violence. Alan was trying to run away from Masso, who accosted him for no reason. After the police and media reported that Blueford had shot Masso, the OPD was forced to concede that Blueford never fired a gun and Masso shot himself in the leg.

However, since this admission the OPD and the Sherriff’s Department have colluded to keep the specifics of the incident a mystery. The OPD has yet to provide the family with a police report. The Blueford family and their supporters are demanding that the OPD investigate Alan’s murder, that Masso be fired and arrested, and that OPD chief Howard Jordan be held accountable for the lies initially told to the Blueford family about their son. The Justice 4 Alan Blueford Coalition is also demanding an end to racial profiling and the repeal of the Police Officer’s Bill of Rights which keeps killer cops on the streets.

At 5 p.m. around 150 people, including this reporter and many other members of the PSL (Party for Socialism and Liberation), gathered at Oakland City Hall. Although City Council meetings are open to the public, guards locked the front doors and attempted to refuse entry to the Blueford family and their supporters. The Bluefords calmly led the crowd to a side entrance where we entered without incident.

The Blueford family and their supporters are demanding that the OPD investigate Alan’s murder, that Masso be fired and arrested, and that OPD chief Howard Jordan be held accountable for the lies initially told to the Blueford family about their son.

The family last addressed City Council in May. Jerilynn Blueford told the council members that when she first addressed them it was with the sincere hope and belief that the council would help them and demand answers from the OPD. Four months later it had become obvious to the family that the council is doing nothing and allowing the OPD to get away with murder.

Adam Blueford inquired into the whereabouts of Masso, who has not been seen or heard from since the shooting. He revealed that in the latest of shifting stories from the OPD, OPD was now claiming that Masso’s gun went off by accident as he was removing it from his holster and that Alan’s death was accidental.

This is a ludicrous claim, as two of the three shots that entered Alan’s body were fired into his back, and witnesses have claimed that the last bullets were fired while Alan was already lying on the ground from the first shot. Adam said, “We want Masso and all people like him off our streets!” The crowd responded with thunderous applause and a standing ovation. 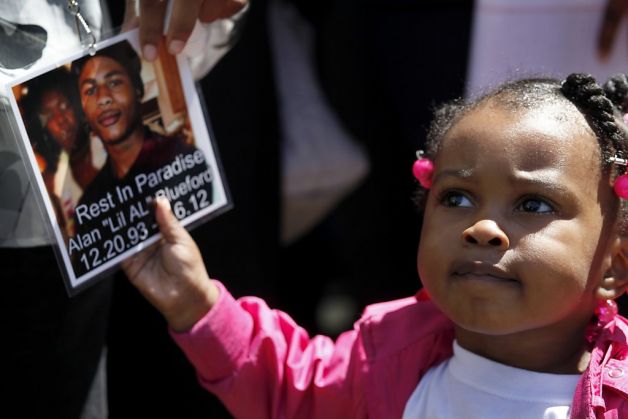 As relative after relative spoke tearfully of the ways that Alan’s death has affected them, the crowd consistently voiced their support for the family and their contempt for the council. As the chants of “Justice for Alan Blueford!” became deafening, Council President Larry Reid threatened to have the chamber cleared. The crowd replied with chants of “No, you won’t!”

Clearly shaken, Reid left the auditorium for several minutes. When he returned, he said that Chief Jordan would be in the chamber in 10 minutes to give the police report to the Bluefords. The crowd applauded.

As the chants of “Justice for Alan Blueford!” became deafening, Council President Larry Reid threatened to have the chamber cleared.

Outrageously, Reid attempted to convince the crowd that the Bluefords had agreed to meet with him privately and were waiting to speak to him in a private chamber. But many in the crowd had just been talking to Adam and Jerilynn outside the chamber and knew they were still there. The Bluefords later confirmed that Reid had attempted to convince them to allow the council meeting to go on as planned and meet with Reid privately and without an attorney after the meeting but the family refused to do so.

Outrageously, Reid attempted to convince the crowd that the Bluefords had agreed to meet with him privately and were waiting to speak to him in a private chamber.

Caught in a blatant lie, the desperate council attempted to shift the focus of the meeting by resuming their agenda with a fluff-point titled “Declaring Oakland a Center for International Peace.” The crowd erupted with boos and chants of “No justice, no peace!” Reid declared the meeting closed and the council members scurried out of the room. The crowd chanted, “Howard’s a coward!”

Outside City Hall, the Bluefords thanked their supporters and said that if city officials refused to serve the people, the people were left with only one choice: shutting down the operations of city officials. That night, the people successfully did just that.

A few miles away, in Vallejo, another City Council meeting was disrupted by the family of Mario Romero, another young African-American man, who was murdered by Vallejo cops on Sept. 2. The epidemic of racist police murder continues, but the people are fighting back.

As the family of Alan Blueford continues to struggle for justice after he was killed by police on May 6, new information is coming to light about Oakland, Calif., police officer Miguel Masso, who pulled the trigger that ended Blueford’s life.

While pursuing Blueford, Masso passed a Cinco de Mayo party at a house where children were playing in the yard. It was in this yard that Masso pulled out his gun and fired four shots into the crowd, hitting Alan three times and killing him. Two of the three shots were fired into Alan’s back as he lay bleeding on the ground. The last shot Masso fired ended up in his own leg.

The East Bay Express newspaper reports that Masso has a well-documented history of violent behavior going back to his days as a New York cop. In the early morning hours of March 15, 2007, Masso and three other officers entered a Bronx, N.Y., holding cell where prisoner Rafael Santiago was sleeping. They told Santiago that he was to be transferred to Bronx Central Booking.

According to documents, Santiago refused to walk out of the holding cell with the officers. Masso and the three other cops responded by throwing Santiago to the floor, kicking him in the head and body, and then sadistically tasering and macing him as he lay on the ground. Santiago was then relocked into the holding cell where he begged for medical assistance for the six severe burns that covered different parts of his body. Masso refused to help the injured prisoner.

After Santiago filed a complaint with internal affairs, Masso resigned from the New York City Police Department rather than give an interview about the incident. However, he easily found a new job with the Morgan Hill Police Department of Santa Clara County, Calif. He transferred to the Oakland Police Department in 2008.

OPD Chief of Staff Sgt. Chris Bolton said that all transferred officers “receive a full background investigation, including a review of their personnel file” from past employers. Thus, there is no reason to doubt Bolton when he claims that Masso’s record was well known when he was hired by the OPD. Hiring Masso did not represent an oversight on the part of OPD; rather it reflects its racist history.