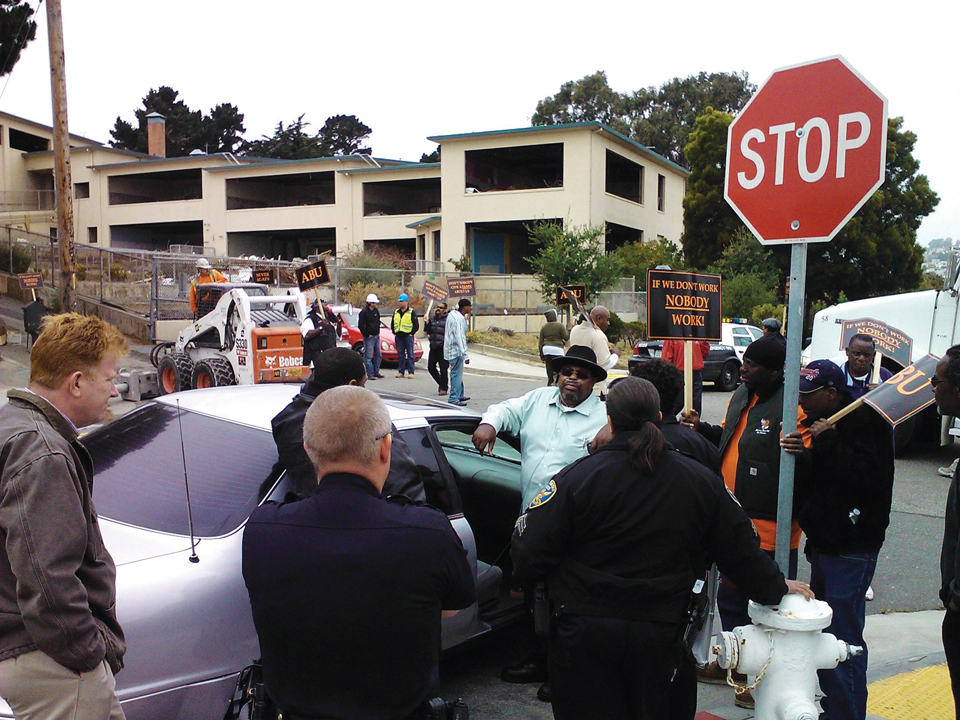 For two days in late August, Aboriginal Blackman United organized over 30 unemployed union members from Bayview Hunters Point to protest construction at Bayview’s Willie Brown Academy. We did not protest because we disagree that our public schools, particularly in the Black community, are much in need of repair. We did not protest because we disagree with the $531 million that the San Francisco School District will spend to upgrade our public schools. In fact, we voted for the bond and to pay for it with our taxes.

We protested because, despite this historic opportunity for the School District to work with local communities to rebuild our schools, there are no Black workers and no Black contractors at Willie Brown Academy. And at ABU we say that if we don’t work, nobody works.

We protested the perpetuation of a disconnect between our community and public education: Our young people are taught to excel and stay in school but lack the chance to a get a good-paying job building the same institutions of learning where they are told to believe in hope and opportunity. School District construction is the chance to employ parents of public school students and bring back young graduates on the edge of despair to make our schools even better and support themselves and their families in the process.

We protested because, despite this historic opportunity for the School District to work with local communities to rebuild our schools, there are no Black workers and no Black contractors at Willie Brown Academy. And at ABU we say that if we don’t work, nobody works.

People might need a little bit of history. For nearly 30 years, ABU has fought for opportunities for Blacks on local construction jobs and inclusion in the local building trade unions. I am a member of the Electricians Union, have performed construction as a worker and a contractor my entire adult life, and know firsthand what good-paying union construction jobs can do to support families and rebuild communities. 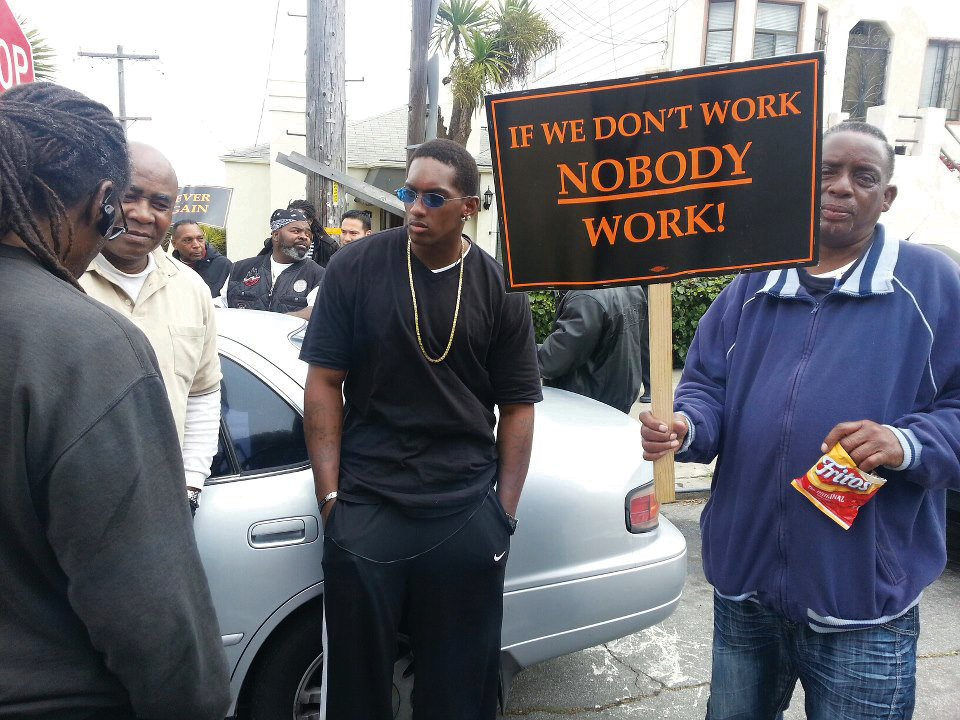 The City made a promise to our community 40 years ago: When the Hunters Point Shipyard was phased out, all of the talented Black workers that built weapons of war for this country would have the opportunity to instead build San Francisco and ensure that the southeast sector’s strong Black middle class would not go into decline.

But that promise was based on the “good faith efforts” of the Building Trades Council and Contractors Association. As a result, our community has been forced to fight for every job that we receive. On projects such as the Third Street Rail, we literally had to shut down work in order to get Blacks onto the jobsite.

Forty years later we fought for mandatory local hiring on City-funded construction and we will do the same at San Francisco Unified School District. This is a call for the community to come together around this issue, to unify, and to fight this fight together.

The public schools that we will rebuild with $531 million of the community’s hard-earned taxes serve predominantly Black, Brown and Asian students whose parents cannot afford private school. These are the children of San Francisco’s working poor. These are the students whose blue-collar families will most benefit from mandatory local hiring and requirements for local contractors that hire locally, students who we can introduce to careers in construction when the School District does better than “good faith.”

This is a call for the community to come together around this issue, to unify, and to fight this fight together.

Even though unions such as the Laborers and Carpenters support local hiring, we face the same opposition that we faced when we worked with Supervisor John Avalos and Mayor Ed Lee to require local hiring on City projects: the San Francisco Building and Construction Trades Council. Their spokesman, Michael Theriault, who opposes job guarantees for local residents even though he is the vice president of the board of Young Community Developers, has publicly attacked Black workers in order to create a racial divide between workers of color, suggesting that Blacks are inferior to other workers. 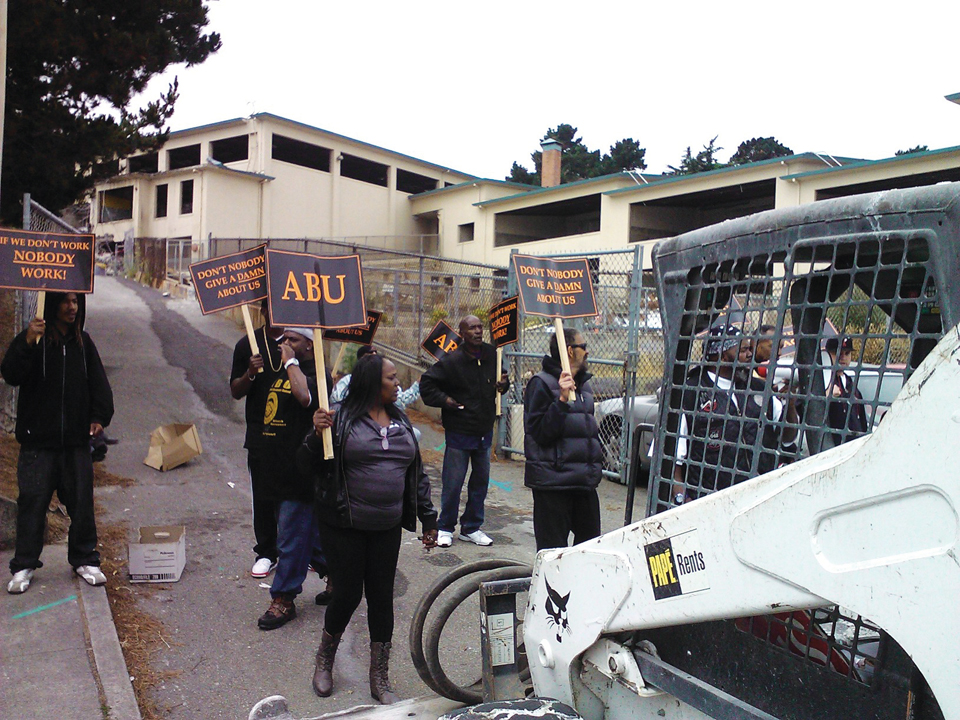 ABU proves ignorant people like this wrong on a daily basis by fighting racism on the job site so that our people get the chance to show what they can do. Black workers built the White House and many of our national monuments in Washington, D.C. When given the chance, Black workers have built successful projects in Bayview Hunters Point all the way down to the San Francisco Airport.

We will not stop until the San Francisco Unified School District says Yes to local hiring and local contractors. ABU called off our protest after Bayview Police Capt. Robert O’Sullivan agreed to set up a meeting with School Superintendent Richard Carranza to discuss our concerns.

The School District helped two laborers get onto the job the next day, which is a start. But there is $40 million more worth of work to go, and we will continue to do what is necessary to get our people and our community contractors out on any job rebuilding our schools.

“Good faith” has never worked and will never work.

James Richards is the founder and president of Bayview-based job advocates Aboriginal Blackman United. Supporters are encouraged to contact San Francisco School Superintendent Richard Carranza at (415) 241-6121 to urge him to require local workers and local contractors on School District construction.