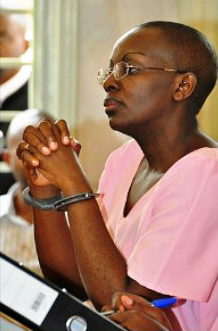 Just over two years ago, on Oct. 14, 2010, Rwandan police arrested and imprisoned Victoire Ingabire. She’s appeared only in Rwandan courts, in the pink gown and shaved head of Rwandan prisoners ever since.

KPFA Radio, in distant Northern California and streaming on the web, last spoke to her on Oct. 9, 2010, five days before her arrest and eight days after the official release of the U.N. Mapping Report on mass atrocities in the Democratic Republic of Congo.

When Ingabire spoke to KPFA by phone that day, she confirmed reports that Rwandan government security operatives surrounding her home in Rwanda’s capital, Kigali, had been replaced by police with firearms and that six of them were visible from a window inside. Others reported that Rwandan troops had moved into her neighborhood and shops had been ordered to close.

For the same report, KPFA spoke to former ICTR defense attorneys Christopher Black and Peter Erlinder. Erlinder had been imprisoned in Rwanda in May and June that year, after traveling there to defend Ingabire against state charges. Ingabire herself was imprisoned five months later.

The verdict in her trial has been postponed twice, but now, once again on Friday, she is facing the Rwandan prosecutor’s request that she be sentenced to life. Her crime? Disagreeing with Rwanda’s constitutionally codified history of the Rwanda Genocide, which Rwandan Gen. Paul Kagame has used to justify 16 years of military aggression in D.R. Congo. The ongoing aggression has cost millions of East and Central African lives.

San Francisco writer Ann Garrison writes for the San Francisco Bay View, Global Research, Colored Opinions, Black Star News, the Newsline EA (East Africa) and her own website, Ann Garrison, and produces for AfrobeatRadio on WBAI-NYC, Weekend News on KPFA and her own YouTube Channel, AnnieGetYourGang. She can be reached at ann@afrobeatradio.com. This story first appeared on her website. If you want to see Ann Garrison’s independent reporting continue, please contribute on her website at anngarrison.com.