[In this video, titled “Une Grande Confrontation Inevitable,” the crowd is initially shown protesting on Jan. 9 outside the Port au Prince courthouse. From 2:47 minutes in, they begin to march to President Aristide’s home, harassed by the police as thousands more join in along the way. – ed.]

Not well reported by the mainstream media, on Wednesday, Jan. 9, there were MASSIVE demonstrations throughout Haiti to support former President Aristide, who the Martelly-Lamothe government summoned to court on frivolous and specious charges his supporters see as political persecution. People came out in huge numbers in Port au Prince, Cap Haitian, Gonaives, Central Plateau, Hinche, Les Cayes, other cities and even in the Island of La Gonave to tell the government that putting Aristide on trial is the same as putting the Haitian masses on trial.

Apparently the people flowing into the streets forced Martelly Prosecutor Lucmane Delille to back-peddle on his court summons, calling Aristide to beseech him not to leave home, saying Delille would come to his house to meet with him and his lawyers.

Many folks who took to the streets yesterday indicated that even if shot down or killed by the U.N. or police, they will not allow the “internationals” to escape accountability for the theft of over $7 billion in charity dollars meant for homeless earthquake victims. Three years after the earthquake, Haitians will not be distracted by the “Aristide-is-corrupt-and-without-support” card to prolong the corruption and tyranny. “2013 will not be the same as 2004,” the year of the coup that forced Aristide into exile, they say. – Ezili Danto, Haitian Lawyers Leadership Network (HLLN), Jan. 10, 2013 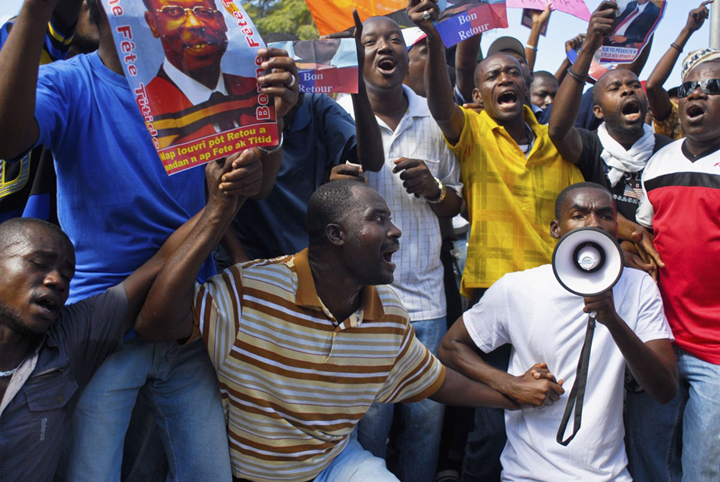 It is nearly two years since the joyous return of former President Jean-Bertrand Aristide, his wife and colleague Mildred Trouillot, and their two daughters to their homeland of Haiti. Tens of thousands of people followed President Aristide’s car as it drove through the streets to his home and then climbed over the walls to continue an emotional and heart-felt greeting for Haiti’s first democratically elected president. In his speech at the airport, President Aristide focused on education and the importance of inclusion for all Haitians in the process of restoring democracy.

Since his return, President Aristide has done exactly what he promised to do – reopen the University of the Aristide Foundation’s Medical School. On Sept. 26, 2011, the medical school once again opened its doors – this time to a new group of 126 future Haitian doctors. Seven years after the school’s forced closure by the U.S.-orchestrated coup in 2004 and four months after the return of former President Jean-Bertrand Aristide to Haiti, medical education resumed at UNIFA. Just this fall, UNIFA began accepting candidates for a new nursing school. And this is just the beginning of a determined initiative to improve health care for all Haitians, particularly critical with the ravages of the cholera epidemic sweeping the country.

Yet President Aristide is again under attack. He has been summoned to appear in court this Wednesday, Jan. 9, as part of an investigation into Lafanmi Selavi, a home for street children that Aristide organized in 1986. Some former residents of the home now claim that Aristide owes them money, among other unfounded and fabricated charges. The prosecutor in this current investigation was a key member of the GNB, the right-wing network that helped direct the 2004 coup against Aristide’s democratically elected government. 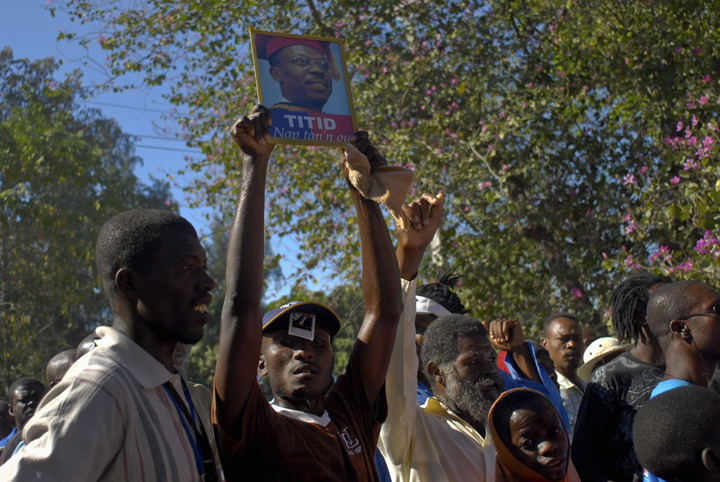 This court summons is the latest twist in the continuing campaign to undermine both President Aristide and his political party, Fanmi Lavalas. Twenty-one pro-Lavalas activists and musicians have been jailed without charges since Dec. 16 after taking part in a demonstration commemorating the 22nd anniversary of President Aristide’s election in 1990. This was followed by a court summons to seven Lavalas grassroots leaders and activists for speaking out against the arrest of the 21. And now the court summons President Aristide.

This is no surprise. The Haitian government of Michel Martelly came to power after a staged “election” in which Fanmi Lavalas, the most popular political party in Haiti, was banned from participation. Martelly has embraced Jean-Claude “Baby Doc” Duvalier, the brutal former dictator, who lives freely in Haiti and has just been granted a diplomatic passport. Human rights organizations estimate that Duvalier and his father, Francois “Papa Doc” Duvalier, ordered the deaths of 20,000 to 30,000 Haitian citizens during their 29-year rule. While Duvalier has been “cleared” by the Haitian government of human rights charges, Aristide and the Lavalas movement remain targeted.

Speak out against the Red Cross on the third anniversary of the earthquake in Haiti on Friday, Jan. 11, 4:30-5:30 p.m., outside Red Cross headquarters, 3901 Broadway, near MacArthur BART, Oakland

To mark the third anniversary of the earthquake that devastated Haiti, actions in a number of countries are calling the U.S. government and NGOs (non-governmental organizations) on their rape and pillage of Haiti.

Tens of thousands of people have been demonstrating in Haiti for months. Three years after the earthquake, despite billions donated by a generous public, hundreds of thousands of people are still struggling to survive in tent cities, surrounded by rubble. They are still without clean water or food security or income, still fighting the cholera imported by U.N. troops. And now they face the further devastation of Hurricane Sandy, which destroyed 70 percent of the crops – though only its impact on the U.S. got publicity. See “Disastrous Relief“ in the London Guardian.

Haiti has more NGOs per square mile than any other country in the world, yet it is the most impoverished in the Western Hemisphere. The NGOs have stolen millions intended for earthquake survivors. And joining in the stealing, the corrupt Martelly government, put there by the U.S., represses the mass protests of a people who refuse to be defeated. 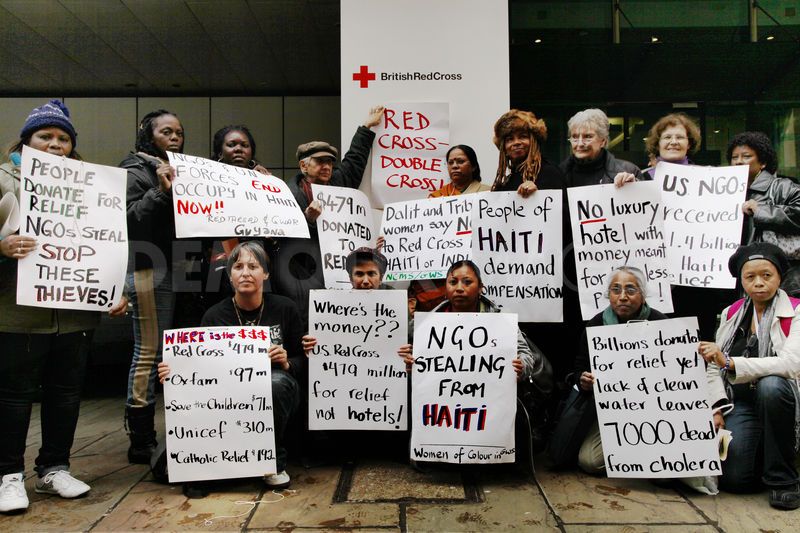 We chose the 11th for the rally rather than the 12th, the actual anniversary of the earthquake, because the Red Cross offices will be closed Saturday.

Some of us spoke out outside the London Red Cross in May 2012. It was one of the biggest beneficiaries of public donations: at least $479 million to the U.S. Red Cross alone – whose CEO earns $600,000 a year. Hardly any of these millions have reached the survivors. Instead the Red Cross is using some of it to build a luxury hotel and conference center in Haiti. We must protest this grand theft. See http://globalwomenstrike.net/content/protest-red-cross-theft-haiti.

Western governments and NGOs have used natural disasters as their opportunity to destroy Haiti’s agriculture and impose sweatshops. At this moment almost everywhere in the world there seems no limit to the plunder by the elites. The burden and the trauma are falling especially on women – the first carers, the poorest and the hardest workers – the main breadwinners in 70 percent of Haitian families. In protesting the rape of Haiti, we refuse the rip-off we are suffering everywhere by the same elite.

What you can do: