The “storm of our lives,” of course, refers to Katrina. But in my mind it also refers to the storm that WAS some people’s lives even before Katrina. The book that I’m about to review is one of the least likely Katrina outcomes imaginable. Why mince words? The book is an actual miracle. 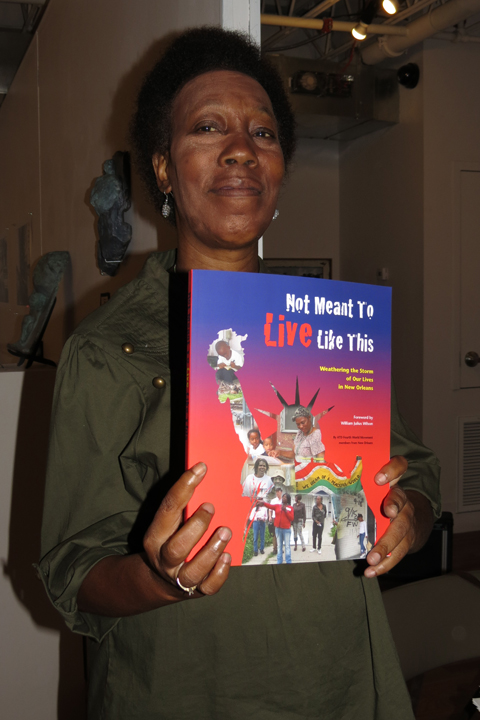 One morning after Mass at the Poor Claire Monastery, Maria Victoire, a volunteer with the Fourth World Movement, broached the idea of a collaborative book written by extremely poor New Orleaneans scattered to the winds after Hurricane Katrina, fending or floundering out there in the great New Orleans Diaspora. She was asking my opinion as an author about what to do with the 50 or so interviews she had conducted and how to get them published as a book. I smiled and told her what a wonderful idea this was. I was thinking to myself: NO WAY! Turns out it wasn’t originally her idea at all.

Maria was born (in1961) and raised on Mauritius Island in the Indian Ocean. English is her second (or third?) language. She came to New Orleans as a full time All Together in Dignity (ADT) Fourth World Movement volunteer only months before the storm. As we New Orleaneans are wont to pointedly note: She’s not from here.

The Movement is a network of people in poverty and those of other backgrounds who work in partnership toward overcoming the exclusion and injustice of persistent poverty. In New Orleans before the storm, this had taken the form most prominently of Street Libraries where volunteers and parents spread out sheets or blankets on the sidewalk in poor neighborhoods on which they read books and conducted art projects with any child brave enough to join in. Sometimes that meant gently knocking on doors for weeks, eventually yielding a furtive glance through a curtain.

But gradually, word spread and children who considered themselves failures at school could find a dependable place to shine. Finally, even the drug dealers got behind the endeavor. As they moved their business out of eye and earshot of the blanket on the sidewalk they’d say, “Listen to the book ladies. You don’t want to end up like me.”

When the city flooded in August of 2005, the families who partook of the Street Libraries gave a whole new dimension of meaning to the phrase “lost everything.” All they HAD was family and the cooperative support of neighbors and communal networks nurtured by rituals, celebrations and ceremonies over the years.

Webs of safety and security created by people themselves out of shared hardships were lost overnight. That’s something you can’t file an insurance claim for. Parents lost children. Evacuation, traumatic for all of us, played out for these families often at gunpoint, with no money, no car, no experience of anyplace beyond their neighborhood, in treacherous water, with no ability to swim. They ended up all over the country. 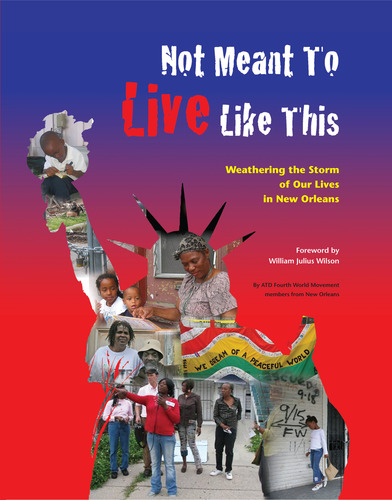 Maria and fellow Movement volunteer Corrina Bain left New Orleans on the Wednesday after the storm, getting their bearings in Baton Rouge and then striking out against great odds to find all of their scattered Street Library families. Maria: “We did not give up on anybody. We diligently tracked them down … We drove first to see Eula Collins and her children in Arkansas. They had struggled the hardest before the storm, and we had been particularly worried about them.”

After the joyously tearful reunion, they got down to the serious discussion of what to do next. Maria was thinking Street Libraries in the Diaspora. Eula, on the other hand, was thinking Book. “About your courage,” Maria added. “It should be a book that would change the hearts of the people who read it, so that your life and the lives of your children will change for the better.”

In the third year of visiting families after the hurricane, Maria recorded the first of 50 oral history interviews. Much of the conversation was about how they would write the book together. The project wasn’t just good therapy for survivors or a way to rebuild community – although it was that. Its goal was to change social policy, to become a tool to overcome poverty.

Stories can educate. What if social policy could be redesigned to accommodate technical expertise AND the knowledge and experience of local residents in a participatory human rights approach? This is the grand vision behind the book.

Warning: Many of the stories will break your heart. Some will make you mad. Nothing is censored to prove a point, create an image, or advance an agenda. The interviews are raw and real, allowing a rare entre into what, for most of us, is an invisible world, the Fourth World, a population group living in extreme poverty.

I was particularly interested in what Cootis had to say. He doesn’t mouth platitudes: “I never growed up with the dreams of being one specific person. I never knew what I was gonna turn out to be. … I don’t have hopes or dreams. I never really hoped for nothing, because I never knowed how I was gonna turn out, so I never planned nothing. . . I just growed up.” 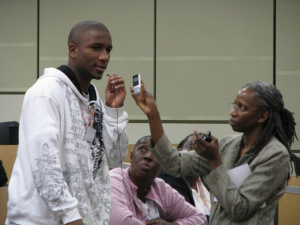 The interviews run the gamut – neighborhood interaction, parenting, education, life in exile, housing, celebration, hope, what it was like to return. In addition to the interviews, the book contains a rich storehouse of neighborhood history, detailed maps pinpointing community resources and gathering places, and beautiful color photographs that make the vibrant stories and storytellers come alive.

Here’s where the quiet revolution comes in: Sister Jane McKinlay, a nun for 60 years in the Society of the Religious of the Sacred Heart, says: “Quietly, for many years, a different message is being given to the world through the Fourth World Movement, the different message being that the traditional way we are dealing with poverty – all this giving and social programs to help people that are poor – that they haven’t worked. That the gulf between those who have and those who have not has only widened.

“And that there will be an end to extreme, chronic poverty only when those who are living in extreme, chronic poverty are partnered by persons who are not in that situation, and all of them working together effect an end of extreme poverty. … [Stopping] the continuation of people living in extreme poverty is a responsibility for every individual in the entire population, and we are all morally responsible to get involved and become partners with the very poor.”

I hear this in the message of all great religions and yet I hear nothing in the platforms of the presidential candidates about a true partnership with the poor. The debate seems to be stuck around the efficacy of this or that handout and may be based on erroneous assumptions.

It’s easy for me to dismiss the chance of a real partnership between the poor and the movers and shakers in politics or policy with a NO WAY. But then that’s exactly how I at first dismissed the possibility of this magnificent book. You’d think, sitting there in the monastery inspired by St. Clare in the 13th century – she was perhaps the most beautiful, privileged, golden-haired damsel ever to become one with the poor – that I would have been more aware of the power of miracles.

Orissa Arend is a mediator and psychotherapist in New Orleans and author of “Showdown in Desire: The Black Panthers take a stand in New Orleans.” Learn more about the book, “Not Meant to Live Like This: Weathering the storm of our lives in New Orleans,” and the book tour at http://www.4thworldmovement.org/booklaunch.php.