A peace treaty for the Democratic Republic of the Congo is scheduled to be signed on Feb. 24, but is it making way for peace or for the balkanization of the mineral rich DRC?

KPFA Weekend News Anchor Cameron Jones: A peace treaty for the undeclared war in the Democratic Republic of the Congo, which was resumed last year by the Rwandan and Ugandan-backed and commanded M23 militia, is now scheduled to be signed on Feb. 24.

However, some critics say that the peace treaty is really a roadmap for the division of mineral rich eastern Congo into separate countries, or even free trade zones, for the convenience of Western mining companies.

KPFA’s Ann Garrison spoke to Congolese mining researcher Jean Didier Lozango, one of the many Africa advocates who believe that the borders of the DRC must remain intact for the sake of both Congo and Africa.

KPFA/Ann Garrison: Congolese mining researcher Jean Didier Losango is now based in Johannesburg, South Africa, where he is pursuing a doctoral degree in sustainable development, but he recently returned from doing research, sponsored by the University of Berlin, in Katanga Province, the most mineral rich province in his homeland, the Democratic Republic of the Congo, or DRC. 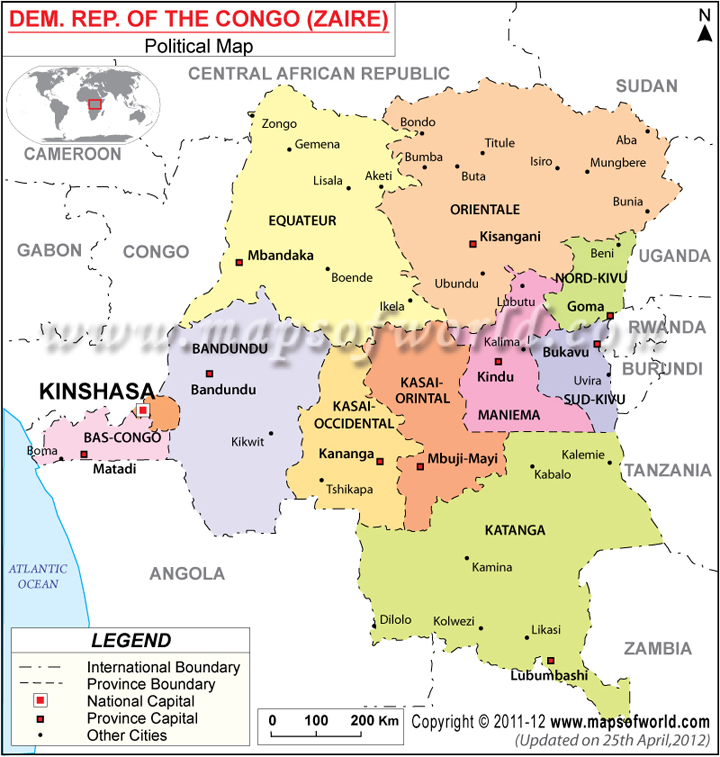 Like many Congolese people, Losango speaks English, French and African languages fluently. His English needs no translation, but because he has a strong French accent, and because the Congolese provinces he speaks of are distant and unfamiliar, I’m simply going to repeat his statements to KPFA about why the Democratic Republic of the Congo must resist being divided.

If Katanga is one country, Kivu is one country, I’m telling you NO. And my question is why do people want only those provinces like Katanga to be independent? The DRC has 11 provinces, but why do people only focus on these provinces, Katanga and North-South Kivu, and they forget about Equateur, Bandudu and Kasai, which are also part of the DRC provinces? Because they have interests there. There are minerals there and they have to control them. So they are pushing this agenda to have this part of the DRC out of the DRC. 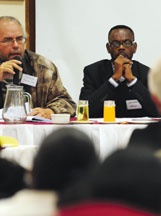 KPFA: And that was Jean Didier Losango, Congolese mining researcher, on the peace treaty for the Democratic Republic of the Congo scheduled to be signed on Feb. 24, which many critics and Africa advocates say is a roadmap for the division of eastern Congo into individual states for the convenience of Western mining companies.

The so-called peace agreement, in French and English, is posted at http://friendsofthecongo.org/images/pdf/peace_framework_feb_24.pdf.

KPFA Weekend News Anchor Cameron Jones: Last week this KPFA newscast reported on the peace treaty said to be intended to end the decades-long conflict in the Democratic Republic of the Congo, or DRC. The presidents of all nine countries bordering the DRC – and the presidents of the DRC and South Africa – signed the document the next day in Addis Ababa, Ethiopia, but most outlets described it as a “deal” or “agreement” rather than a “treaty.”

Whatever the proper term, the fighting in the DRC escalated as soon as all the presidents flew home. KPFA’s Ann Garrison spoke to Loyola University’s Brian Endless, a professor of political science and international relations, about the document and the escalation of the war.

KPFA/Ann Garrison: Brian, KPFA appeared to be one of only two outlets to use the word “treaty” to describe the document signed last week. So does KPFA need to report a retraction or correction of its use of the term “treaty”?

Brian Endless: I don’t think so. We had a number of different African states getting together and signing something that they considered to be a legalistic document. It doesn’t say a whole lot, so they probably didn’t have a whole lot of reason not to sign it, but I certainly think that this would qualify as a treaty, and especially since the rebel parties weren’t involved and weren’t signatories. That would have a different status, had they been actively involved and had they signed.

KPFA: Because so-called “rebels” implies a domestic conflict, but this was a treaty between sovereign nations?

Brian Endless: That’s exactly it. And so-called is a good term for rebels. We’ve talked about that before, whether they should really be considered rebel groups or not. But yes, because this was between sovereign states, it would certainly qualify under almost any definition as a treaty. And then the question is “What’s it actually doing?”

KPFA: What do you think the gathering was really all about?

Brian Endless: I personally think it was political cover for Rwanda, Uganda and the DRC governments. They’ve been trying to legitimize the conflict for years now – really, since Rwanda and Uganda put the first Kabila in charge in the DRC in the Congo, or what was then Zaire, and turned into the Congo again.

So I really think that they’re just looking to pull attention away from the fact that all of the international reports have implicated Rwanda in particular, Uganda to a next extent and DRC government troops in a lot of the violence that’s going on there, with Rwanda and Uganda pretty clearly driving the violence. That wasn’t talked about at all in Addis Ababa.

This was really a showpiece much more than anything else.

KPFA: You included the presidents of Rwanda, Uganda and the DRC among those looking for political cover here. Do you imagine that they’re collaborating, or simply that they’re looking to cover for their own armies’ crimes?

Brian Endless: I think yes to both. They have gone back and forth between the three of them. There are days and weeks where they seem to collaborate very closely together, and then other times where they would just as soon be rid of the other.

One of the scariest things to me as an observer here is anytime we hear that the Congolese and Rwandan forces are getting together to hunt down rebels, it almost always means that an enormous number of civilians are about to be killed.

KPFA: And that was Loyola University-Chicago Professor Brian Endless on the Congo peace treaty signed last week, just before the escalation of the fighting in the Democratic Republic of the Congo.

Endless also said that the U.N. Security Council, which mediated between the African nations, had demonstrated no real interest in peace in the DRC, where its most powerful members have resource interests. For a transcript and video illustration of last week’s report and ongoing coverage, see the San Francisco Bay View.