Prison is a lonely, dark, cruel reality where you immediately become trapped in a time warp on one of the many modern day plantations that have sprung up like trees across America.

Rape in prison is a part of the fabric as is rotten, evil, racist corrections officers, or COs. One of America’s taboos right up with “There are no political prisoners or torture in America’s prisons.” Rape and the threat of rape by these COs is an act of sexual torture that leaves more mental scars than physical, and the victim of this violent act is no less a victim than if the act was committed out in society.

In 2008, shortly after Hurricane Gustav ripped through several of Louisiana’s 64 parishes, a brutal sexual assault was being carried out by a sadistic CO. I will conduct a sit-down with the victim of that violent act.

Zulu: Shannon, how are you today, man, and what is your whole name?

Zulu: Shannon, you were a victim of a violent sexual assault by a CO here back in 2008. You want to tell me about that?

Zulu: Shannon, how tall are you and how much do you weigh? And describe what is a booth tier.

S.A.: I am 5 feet 2 inches and 135 pounds. A booth tier is a tier of 13 cells, as they have in several camps. The booth has bars like a regular cell in front, but with 4 feet by 4 feet of space with a steel door the guards can close when they are gassing you or beating you.

Zulu: That big door does nothing for anyone on the tier when the CO’s spray or beat someone, because everyone feels the effect of the gas and hears the guy being beat with those PR-24s (sticks) and kicked with those heavy boots. I have been on one such tier when an attack took place.

Zulu: What went down?

S.A.: I was laying in my bunk. When Master Sgt. DeWayne McMills entered my booth and pulled the steel door, and said, “Nigger, get your ass up, strip, take off the jumpsuit, and come to the bars. Turn around, bend over and spread your Black ass open.” I told the master sergeant not to use those racist terms with me and that I was not going to bend over and do nothing because he knows that ain’t the way it is done.

Zulu: I thought it was “squat and cough”?

S.A.: It is; that’s the way it’s supposed to go. But when I refused, Master Sgt. McMills went off calling me every racist name in the book, throwing the restraints against the walls: “You fucking Nigger, you are dead.” “You are one hung Nigger.”

Zulu: Wait a minute. He threatened to hang you?

S.A.: Yes, he did, and I know they will do just that. Master Sgt. McMills says “This is your third verbal order. Come to the bars and be restrained, Alexander.” Not to relive that whole experience, (but) I went up to the bars to be restrained. He put the cuff of the waist belt on and said, “Turn around,” so he could grab the restraints belt and violently pulled me up against the bars and fastened the belt around the bars and began slapping me upside the head through the bars and started feeling on my ass, saying all kinds of crazy shit. 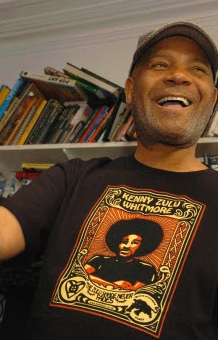 That they was going to rape me, fuck me in the ass. There was nothing I could do. I feared for my life and I started to beg him not to do that. He – Master Sgt. McMills – went off again with the racist stuff about me. Black people. I still had the jumpsuit up. He said, “I want you to suck my dick through the bars.” And if I, Shannon Alexander, did not perform this act upon him, he would spit upon himself and hit his beeper and tell the warden I spit on him and took the restraints – to have me gassed and beaten. Master Sgt. McMills took the restraint belt aloose from the bars and took the cuffs off. “Strip, Nigger, and get on your knees.”

Zulu: What did you do?

S.A.: Being in fear of my life and what will happen when he presses his beeper, I had to pretend to go along with Master Sgt. DeWayne McMills. I went to the bars like I was going to come into compliance. I got down on my knees and Master Sgt. McMills unzipped his pants and pulled out his penis and attempted to enter my mouth with his penis. I kind of blacked out of my mind and bit down on Master Sgt. McMills’ penis.

S.A.: He ran out of the booth bleeding and hollering. Master Sgt. DeWayne McMills was arrested and booked into the West Feliciana Parish Jail on the 10th day of September 2008 on committing malfeasance in office, crime against nature, and oral sexual battery. McMills posted bail and on or about Oct. 28, 2008, committed suicide by gunshot to the head at his home. And I am the one being punished.

Zulu: You have been in solitary confinement ever since? And do you have an out date?

S.A.: Yes, I have been stuck in the cell ever since. I have written to warden of security about it because I have a parole eligibility date coming up in 2017. I want to get my GED and take up welding and culinary school. As you know, Zulu, administration will not let anyone in a cell participate in any of the educational programs. It’s like I am being victimized twice. My last disciplinary report was in 2010. I am being denied access to rehabilitation opportunities.

Zulu: Can all of this be verified through court records and administration files?

Zulu: Thank you, Shannon, for being brave enough to share your story with everyone. Speaking out is the way to shed some light on this horrible crime. The enemy counts on your silence, young brother, so keep on doing what you do.