On a historic 50-acre ranch in Northern California, Cynnomih Tarlesson and her nine children drop watermelon seeds into the ground. Behind them, her father, Roosevelt, uses a tractor to churn up the dirt for tomatoes, zucchini and eggplant – along with some lesser-known crops, like the Tarlesson-named “Billy Goat Pepper,” from the family’s native West Africa. 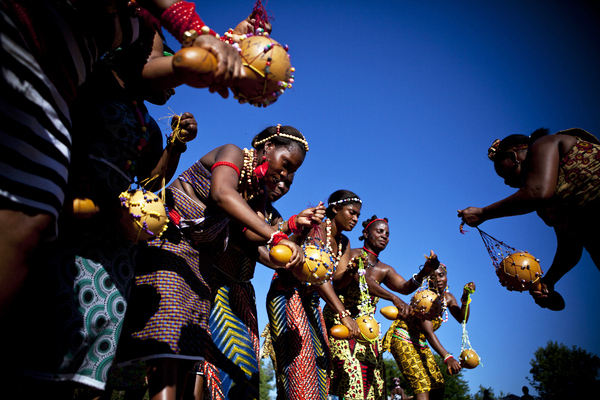 When war erupted in her Liberian hometown in 1990, Cynnomih and her family fled their farm and lived for over two years in the bush, foraging for berries, shoots and small fish. After several years in a refugee camp in the Ivory Coast, Cynnomih, now 43, finally received permission to come to the U.S. as a refugee, along with 25 younger siblings and children (biological and adopted). They joined her father, Rev. Roosevelt Tarlesson, in Vacaville, Calif., where he had lived since the 1970s.

Vacaville was a peaceful escape from the harsh refugee-camp life in Ivory Coast – plenty of food, friendly neighbors and teachers assisting their transition to U.S. life. Yet in this suburban environment, the family’s job prospects were low and financial pressures high. They missed farming; they missed the land.

So in 2007, the Tarlessons secured a loan to buy property in nearby Guinda, population 254. “When refugees are brought to this country, they are put in cities, making minimum wage at factories. Why? They know how to farm. Let them farm!” says Rev. Tarlesson, who’s pushing this idea with resettlement agencies at the national level.

In Liberia, the Tarlessons were subsistence farmers, but in Guinda, Rev. Tarlesson says, they hope to become “a major health food producer.” They are already selling eggplant and peppers to a large Asian grocery in Vacaville and to a community-supported agriculture program in Oakland, and hope to expand to organic chicken.

“Here, you have to make your own rain,” Cynnomih laughs. “In Liberia, we didn’t have to do that. I’d just plant the seeds with my baby on my back and wait for the rains to come!”

“When refugees are brought to this country, they are put in cities, making minimum wage at factories. Why? They know how to farm. Let them farm!” says Rev. Tarlesson, who’s pushing this idea with resettlement agencies at the national level.

The Tarlessons had to learn modern farming techniques, as well as irrigation and when to plant in a seasonal environment. Cynnomih is earning a permaculture certificate from Woodland Community College.

Yet the family also relies on traditional Liberian agricultural practices, like transplanting crops and filtering soil by hand through a screen to get the best yield. Organic principles come naturally to the Tarlessons, who were used to farming without chemicals or crop manipulation.

“Whatsoever that I lost, I know God has replaced (with) this,” says Cynnomih with a soft smile, gazing toward the green hills just across the road. She loves the view from her kitchen down to the road, where she can watch as her children scramble off the school bus to pluck after-school snacks from the fields.
http://youtu.be/5TydCWqycFE

It’s surprising enough that a family of Liberian farmers ended up in this sleepy California ranch town, but the Tarlessons are merely the latest chapter in the long – and mostly forgotten – history of African-American farmers in Guinda.

Guinda was founded by Green Berry Logan, son of a slave mother and Caucasian father in Arkansas, who came to California in 1858. California entered the Union as a free state, and tiny Guinda became known as a safe place for Black people to live and farm. In the late 1890s, the U.S. Geological Survey officially designated the hills “Nigger Heaven,” a name that remained on government maps until the 1960s, when Guinda resident Bill Petty lobbied to have it removed.

Petty’s relatives were some of the original settlers. They came from North Carolina in the 1890s and started one of the town’s first businesses: a butchery. Petty’s own father, a Civil Rights activist in North Carolina, fought for the right to vote in the 1930s. “We went to church one night,” says Petty. “Came back and the house was burnt down.” His father “decided it was about time to get the family out of there.” So they joined their relatives in Guinda. 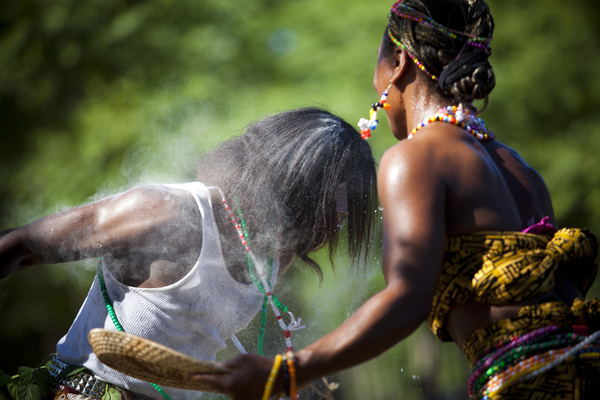 Like Petty’s family, Royce McClellan’s great-great-grandfather came west to Guinda. Royce’s mother ran Carmen’s, a roadside craft store that sold jewelry she made from shells and water-smoothed rocks. Although Royce McClellan identifies as African-American, her great-great-grandmother was Cherokee, and some family members have been Caucasian. “So we’re all mixed up,” she says.

Today, African-Americans constitute just under 11 percent of Guinda’s population; 69 percent of the town is Caucasian, and the remaining 20 percent are Latino, Asian and multiracial. But the locals are proud of the fact that they were, from the beginning, a multi-ethnic community.

The role of minorities in California history is often undervalued. As in most of the West, the cowboy archetype looms large. Yet this iconic figure is remembered mainly as a weathered-skinned, cowboy-hatted Caucasian and, occasionally, Latino. African-American history in California is often focused on the Great Migration of the Black Southerners who came to the state’s cities in the early 20th century.

Like the Tarlessons, Van Hook knew nothing of the town’s heritage before he bought his farm, but he yearned to return to a landscape like that of his rural Arkansas upbringing. The elderly African-American woman who sold the place to him “told me that she was so pleased that it was another African-American who was buying it.” 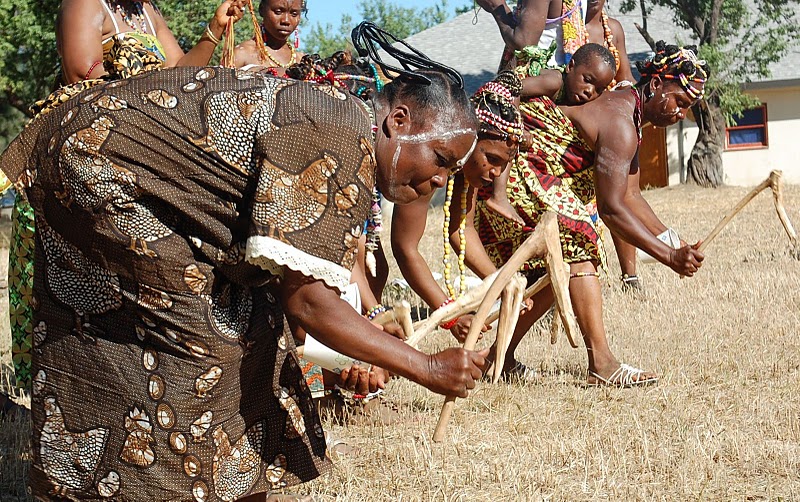 Van Hook joined Guinda’s all-Black Methodist Church and asked the pastor if they’d ever celebrated Black History Month. They hadn’t. So Van Hook offered to take it on. “I headed over to the library in Woodland and went through the archives,” he says. “If I had known then what I know now, I’d probably have majored in history!”

Along with Professor April Harris of Santa Rosa Junior College, Van Hook is uncovering the crucial farming contributions by African-Americans here and throughout the state. Early California landowners recruited Black workers from the Southern U.S. to till their farmland. Some of the newcomers brought modern farming technologies that allowed them to cultivate more land faster, as well as heirloom species of plants like apricots and figs. Farmers like Logan became experts in the hybridization of local crops with plants from “back home.”

“The Tarlessons are adding another piece of the history of Blacks in this area,” Rev. Tarlesson says proudly. They are the only refugee family here but feel at home in the town. And in a sign of historical synchronicity, a descendant of Guinda’s founder, Green Berry Logan, visited the Tarlessons’ home country in 1903. Liberia was founded by freed U.S. slaves – so the Tarlessons, too, can trace their family roots back to U.S. slavery.

For the descendants of the original Guinda settlers, their property – their families’ first land that they could call their own – is symbolic of their ancestors’ emancipation. And for the Tarlessons, their swath of land symbolizes peace and a new beginning. “It takes me far away from a lot of troubles,” says Cynnomih. “I grow my own food, I harvest like I’m back home. It keeps me safe, being here, this place, this little town called Guinda.”

This story first appeared in High Country News and is reprinted with permission and our gratitude.

The Tarlesson family and Chedepo Grebo people of Liberia in Northern California are pleased to invite you to join with us as we celebrate the fifth anniversary of our settlement in Guinda, California, and our cultural, agricultural and social contributions to America. The Chedepo Grebo Cultural Festival is a major African cultural and social event for families, businesses and the public to come and enjoy great food, educational cultural information and live cultural entertainment.

Lodging: You are welcome to camp overnight in our indoor or outdoor facility free. Additional accommodations are available at the four star hotel and restaurants at Cache Creek Casino and Resort.

Youths 18 years old and under who want to perform in the festival must attend three rehearsals, which may be on any three of the following Saturday rehearsal dates: June 8, 15, 22, 29. Rehearsal time is 10:00 a.m. to 3:00 p.m. Lunch is provided on rehearsal days.

Youth will make performance outfits – with adult supervision – during their three rehearsals at the farm. Material for the outfits will be provided.

Transportation to and from rehearsals on the Tarlesson Farm in Guinda is provided. Adult supervised transportation leaves Third Baptist Church at 8:00 a.m. and returns at 4:00 p.m. Farms to Tables Urban Youth Project event permission forms are required. Contact Vernell Hawkins at (415) 822-9497 or Kovac Williamson at (415) 503-6605.

For more information on the festival, visit the Tarlesson Foundation, at tarlessonfoundation.org, or email Lynnette and Eugene White, at eugene_lynnette@sbcglobal.net. They have known and supported Roosevelt Tarlesson and his family since he first arrived in San Francisco in 1976.