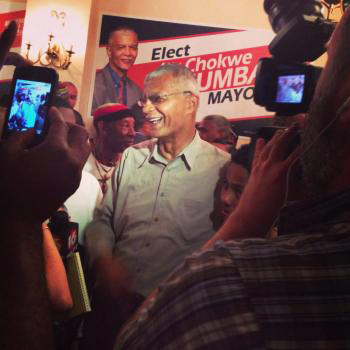 The whole world is watching Jackson, Mississippi, or if not, it should be. Lifelong PanAfricanist and human rights attorney Chokwe Lumumba will be inaugurated as Jackson’s mayor on July 1.

No one with Chokwe Lumumba’s grassroots organizing experience, and no one who has so openly challenged white supremacy has ever been elected mayor of a major American city. And, as Jackson native, scholar and activist Tom Head has written, he has the distinct advantage of promoting democratic economic policies as both a community organizer and a public official. With such a deep connection to the community he represents, Chokwe Lumumba stands to be a historic mayor.

I had the honor of speaking with Mayor-elect Lumumba a year ago, after he had announced his plan to run, for WBAI-AfrobeatRadio. This is an excerpt of that interview, on his plans to promote economic democracy in Jackson. It will be rebroadcast, with comments by Tom Head, on WBAI AfrobeatRadio on Saturday, June 22, 2013.

Chokwe Lumumba: We have to make sure that economically we’re free, and part of that is the whole idea of economic democracy. We have to deal with more cooperative thinking and more involvement of people in the control of businesses, as opposed to just the big money changers, or the big CEOs and the big multinational corporations, the big capitalist corporations which generally control here in Mississippi. They are a reality.

And so it’s not that we’re going to throw them out of Mississippi. I don’t think that’s going to happen, but I do believe that we can develop ways of working to have Blacks and other – indeed, not just Blacks but other poor people, or people who are less endowed with great wealth – to participate in the economy on an equal basis.

Ann Garrison: Could you give some concrete examples? Cooperative farming?

Well, what we have here in Mississippi is what we call the Federation of Southern Cooperatives, and that’s not only for Mississippi but it’s also for Alabama. That is a cooperative farming venture, between farmers, mostly Black farmers, which exists in Mississippi and also in Alabama. 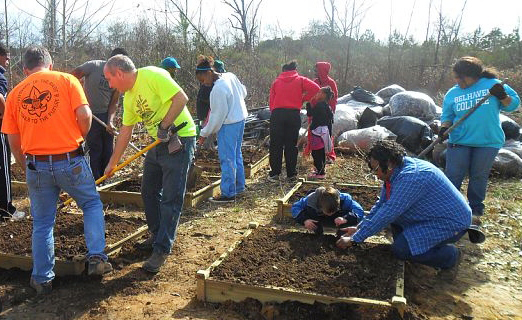 Chokwe Lumumba: There’s a movement in the cities even to develop gardens and to have organic gardens, altogether about 10 different gardens throughout Jackson. But one that I’m specifically working with where we’re developing in our community. And there’s a shared participation and a share of the produce which comes from these gardens.

We also are looking at the use of the public sector dollar, which has got to be very important. In other words, how do we attack white supremacy in terms of business?

So what do we need to do? Well, we have to take a close look at who we’re giving contracts to, and we have to give them to somebody other than just white corporations, as that opportunity avails itself. We have to make sure that whatever corporations get these jobs, they employ the people in the city, rather than employing a whole bunch of people from out of the city. We have to make sure that whoever gets contracts from us agrees to do joint ventures or subcontracting and various things with other companies who can be developed to do those jobs in the future if they weren’t capable of doing them on their own in the present. So there’s a lot of different things going on toward the objective of developing a democratic economy.

Ann Garrison: A lot of the issues that you mention are familiar to anyone who’s been involved in local politics, particularly local hire. You mentioned the local hire issue; this means that when the City of Jackson has development contracts, you would like to see some requirement that they hire locally.

Chokwe Lumumba: Yeah, yeah, yeah. Well, not only do we want to see some requirement, but we have insisted on that on the City Council. Most of the businesses coming in – and I’m not sure this was happening prior to my election to the City Council, to be quite honest with you, or to what degree it was happening – but right now most of the businesses that come before us and start asking for developmental dollars or for our city aid and help in contracts or for us to help them raise bonds at premium rates and things of that nature, most of those businesses now have to address the issue of what their equal business opportunity participation is. And most of them have to address the issue of boots on the ground. In other words, what percentage of their work force are they going to try to make Jacksonians, as opposed to other people.

Ann Garrison: And, have you pushed for training if you’re talking about construction?

I think we have to tighten up on that. I think that our compliance with some of our objectives is not as good as it should be, and even our objectives have been wanting in the past. At one point, the EBO (equal business opportunity) requirement or EBO expectation or goal was only 8 percent, which means that 8 percent of the contractors and things that do business with the city had to be Black, or not had to be Black, but that was the goal. That was woefully inadequate, and so we’re definitely planning on changing that.

Ann Garrison: It’s 8 percent in a city that’s 85 percent Black – you had a rule that a minimum of 8 percent of the contractors with city funding had to be Black, and you’re going to raise that number?

Chokwe Lumumba: No question, no question. Once we win this mayorship, there’s no question it’s going to be raised. But also, I think that the City Council right now has been expecting more than that, even though that’s not a written goal at this point, because a written goal is antiquated, but a contemporary goal would be much higher.

Most of those businesses now have to address the issue of what their equal business opportunity participation is. And, what percentage of their work force are they going to try to make Jacksonians, as opposed to other people.

Ann Garrison: Well, given that Mississippi has a population that has been beaten up and kept down for so many years, are there enough Black contractors now for you to distribute contracts more equally?

Chokwe Lumumba: Is there enough to do it completely equal? Probably not. But that’s the fruit, or the result of an unfair system, where a lot of people don’t have license or bonding potential and things of that nature, and so they can’t get the bonds that you need to do these jobs. 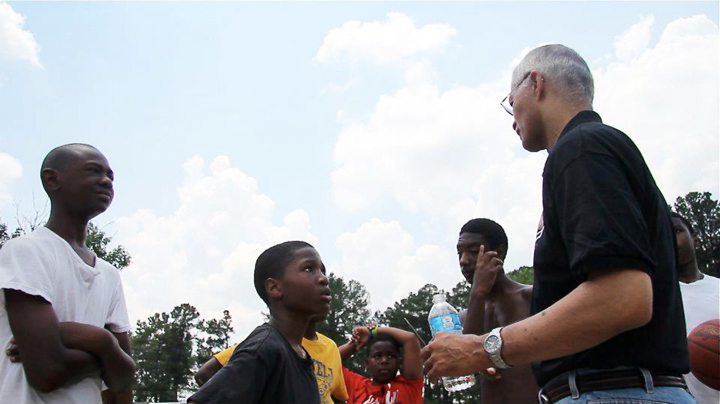 But I should point this out: The population is a highly skilled population. So even though you might not have a Black plumbing operation – and you do have some, I don’t want to say you don’t have any, but you may not have a bunch of Black plumbing operations where they can go out and get bonded and a license appropriately – there’s a whole lot or people walking the streets who can do plumbing and who do it very well. All right?

Chokwe Lumumba: OK. The same thing is true in electrical work and with various other skilled areas of labor. There’s an abundance of skilled labor here, because you have folks in Jackson who come from, unlike the Northern cities, we have folks here who come from the rural area of Mississippi, where they were building their own homes, keeping their own electricity, keeping their own plumbing together, and doing a number of other things that they had to, just in terms of acculturation of their own family life.

Ann Garrison: Uh-huh. This is true in Louisiana as well, isn’t it?

Chokwe Lumumba: Oh yeah, whatever I say about Mississippi is probably true in most of the Southeastern states, OK? And in Southeastern Texas too. It’s probably true of most of these places. It just so happens that the larger number percentage-wise are Blacks who live in Mississippi, more so than any other state, including the other Southern states.

The audio archive of the entire June 24, 2012, AfrobeatRadio interview with Chokwe Lumumba is available on anngarrison.com. Oakland writer Ann Garrison writes for the San Francisco Bay View, Global Research, Colored Opinions, Black Star News and her own website, Ann Garrison, and produces for AfrobeatRadio on WBAI-NYC, KPFA Evening News and her own YouTube Channel, AnnieGetYourGang. She can be reached at ann@afrobeatradio.com. If you want to see Ann Garrison’s independent reporting continue, please contribute on her website at anngarrison.com.