Seven years ago, late in the evening on June 9, 2006, three prisoners – Ali al-Salami, a Yemeni, and Mani al-Utaybi and Yasser al-Zahrani, both Saudis – died at Guantánamo, in what was described by the authorities as a triple suicide, although that explanation seemed to be extremely dubious at the time and has not become more convincing with the passage of time. 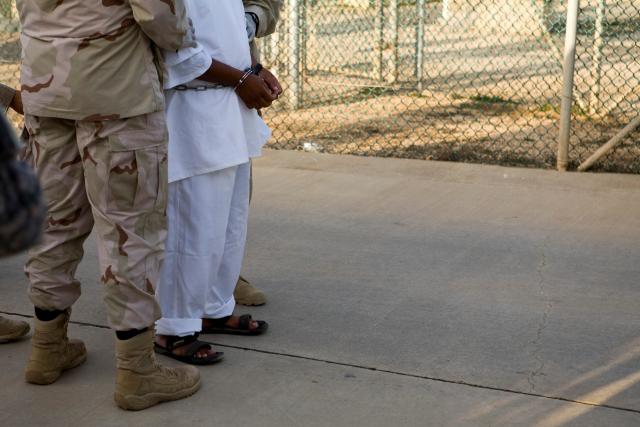 At the time, the prison’s commander, Rear Adm. Harry B. Harris Jr., attracted widespread criticism by declaring that the deaths were an act of war. Speaking of the prisoners, he said: “They are smart, they are creative, they are committed. They have no regard for life, neither ours nor their own. I believe this was not an act of desperation, but an act of asymmetrical warfare waged against us.”

I described the deaths in my book “The Guantánamo Files,” published in 2007, after a fourth death at the prison, of Abdul Rahman al-Amri, a Saudi, on May 30, 2007 (see here and here), and I wrote my first commemoration of the men’s deaths on the second anniversary of their supposed suicide, followed, in August 2008, with a skeptical analysis of the report of the deaths by the Naval Criminal Investigative Service (NCIS), which took over two years to be made available.

The next year, 2009, the anniversary was overshadowed by the death of a fifth prisoner, Muhammad Salih, another Yemeni.

I call this the season of death because all five men died in a two-week period at the end of May and the start of June, and to this day none of the deaths have been adequately explained. It is also, I believe, significant that all five men had been long-term hunger strikers.

Although doubts had been expressed at the time about the deaths of the three men who died in June 2006, and doubts were also expressed about Muhammed Salih’s death, by his friend, the British resident Binyam Mohamed, who was released just four months before Salih died, it was not until January 2010 that the alleged suicide story was blown wide open when, in Harper’s Magazine, Scott Horton wrote a major feature, based on statements made by soldiers who had been at Guantánamo on the night that Ali al-Salami, Mani al-Utaybi and Yasser al-Zahrani died, who insisted that the triple suicide story had to be false.

The main witness was Army Staff Sgt. Joe Hickman, who had been stationed in one of the watchtowers close to the block where the men allegedly committed suicide. Hickman, a former Marine who had reenlisted in the Army National Guard after the 9/11 attacks, was deployed to Guantánamo in March 2006, with his friend, Specialist Tony Davila.

On arrival, Davila was briefed about the existence of what Horton described as “an unnamed and officially unacknowledged compound” outside the perimeter fence of the main prison, and he explained that one theory about it was that “it was being used by some of the non-uniformed government personnel who frequently showed up in the camps and were widely thought to be CIA agents.”

As I explained in my analysis of Horton’s article at the time:

“Hickman and Davila became fascinated by the compound – known to the soldiers as ‘Camp No’ (as in, ‘No, it doesn’t exist’) – and Hickman was on duty in a tower on the prison’s perimeter on the night the three men died, when he noticed that ‘a white van, dubbed the “paddy wagon,” that Navy guards used to transport heavily manacled prisoners, one at a time, into and out of Camp Delta, [which] had no rear windows and contained a dog cage large enough to hold a single prisoner,’ had called three times at Camp 1, where the men were held, and had then taken them out to ‘Camp No.’ All three were in ‘Camp No’ by 8 p.m.”

At 11:30, the van returned, apparently dropping something off at the clinic, and within half an hour the whole prison “lit up.” As Horton explained:

“Hickman headed to the clinic, which appeared to be the center of activity, to learn the reason for the commotion. He asked a distraught medical corpsman what had happened. She said three dead prisoners had been delivered to the clinic. Hickman recalled her saying that they had died because they had rags stuffed down their throats and that one of them was severely bruised. Davila told me he spoke to Navy guards who said the men had died as the result of having rags stuffed down their throats.”

I call this the season of death because all five men died in a two-week period at the end of May and the start of June, and to this day none of the deaths have been adequately explained.

Despite the compelling narrative of a cover-up – which was also backed up by “Death in Camp Delta,” a detailed report produced by researchers at the Seton Hall Law School in New Jersey – the U.S. government shut the door on an investigation.

On the fourth anniversary of the deaths, I wrote a follow-up article, “Murders at Guantánamo: The Cover-Up Continues,” and I have tried to publicize it ever since, as the families tried and failed to secure justice in the U.S. courts (see here and here) and when my friend, the Norwegian film director Erling Borgen, made a documentary about the deaths, also called “Death in Camp Delta,” which I reviewed here.

Since then, another friend, the psychologist Jeff Kaye, discovered the autopsy reports for Abdul Rahman al-Amri and Muhammad Salih, the prisoners who died in 2007 and 2009, and wrote a skeptical article about their alleged suicides for Truthout, and, last September, there was another disputed suicide – of Adnan Farhan Abdul Latif, a mentally troubled Yemeni who had reportedly hoarded medication, in order to kill himself by taking an overdose, even though this appears to have been impossible given the obsessive scrutiny to which the prisoners are subjected.

On May 23, President Obama promised to resume releasing prisoners from Guantánamo – a process that has largely been blocked by Congressional obstructions for the last two years. He needs to do so, and he needs to begin immediately, to address the despair felt by the hunger strikers (103 of the remaining 166 men, according to the U.S. authorities, and 130, according to the prisoners themselves), and to make sure that no more men die while deprived of justice in a prison that he described, in his May 23 speech, as “a facility that should never have been opened.”

Andy Worthington, investigative journalist, filmmaker, photographer and Guantanamo expert, is the author of “The Guantánamo Files: The Stories of the 774 Detainees in America’s Illegal Prison.” This story first appeared in Eurasia Review, where he is a contributing correspondent. He blogs at http://www.andyworthington.co.uk/ and can be reached at andy@andyworthington.co.uk.