We are being held in solitary confinement, and the state compels us to answer personal questions or be held in isolation indefinitely. They call this bi-weekly interrogation “programming,” where we’re forced to reveal our most personal information to our captors, “the state,” knowing that this information can and will be used against us. They give us “packets” containing personal questions such as, “Describe a specific incident where you completely lost control of yourself and lashed out in anger.” I’ll give an example where this question was used:

Taken hostage: And my captors expect me to do what?

Daniel Lunsford, No. 11360357, a Native American, is housed next door to me in Oregon’s IMU (Intensive Management Unit or supermax, similar to California’s SHU) as I write this. Daniel is fighting an outside case where he was assaulted – punched in the face – by a staff member, Correctional Officer (CO) Harrison, on camera and was forced to defend himself.

His packets are specifically designed around questions about lashing out in anger as previously mentioned. Many are multiple choice answers that give no option for self-defense and leave him exposed for self-incrimination. Yet he is coerced to either answer these questions – risking the real possibility of incriminating himself and picking up more time in prison – or spend the rest of his lengthy sentence in solitary confinement. This tactic the state is using to interrogate is clearly coercion, which is a felony crime.

According to state law, ORS 163.275, coercion is to compel and induce an individual to abstain from engaging in conduct in which the person has a legal right to engage. In this case, Lunsford has the Fifth Amendment right to remain silent. Yet he is coerced to incriminate himself under the threat of the indefinite placement in solitary confinement, which was clearly defined as torture by the United Nations in 2011 and is widely known to cause lasting and irreversible psychological injury.

Just because we are incarcerated, the Oregon Department of Corrections is not authorized to dissolve or obstruct our Fifth Amendment right to remain silent. Yet the state does this under the radar, by implementing an internal rule, No. 055 (IMU), and calling these invasive questions “programming,” thereby receiving public funding to commit the crime of coercion, which is a felony.

Recently I asked Assistant Superintendent of Snake River Corrections Judy Gilmore if it is “true that if I act in best behavior and never receive a single misconduct yet simply choose not to answer these invasive personal questions, will I be kept in solitary confinement forever and for that reason alone?” Her response in writing was, “Yes, it is true.” She then went on to write, “If you refer to Rule No. O55 (IMU), you will see that an inmate must complete assigned programming to be considered for release to general population.”

Departments of corrections across the country violate the Bill of Rights by skirting the law to accomplish their goals and have had next to no consequences or repercussions. We have ALLOWED them to do this by just accepting the actions they take against us.

Just because we are incarcerated, the Oregon Department of Corrections is not authorized to dissolve or obstruct our Fifth Amendment right to remain silent.

Well, everyone I have spoken with about this is ready to create positive change and we all agree the three core demands are worthy of our sacrifice to create lasting meaningful changes. We have committed to the struggle and are participating in the July 8 hunger strike in surprising numbers.

We have stopped turning in our packets together, in accord, as more and more people join us because they realize that they are not alone. DOC will begin to realize they must reassess their current strategy and consider our Three Core Demands because they ABSOLUTELY depend on us to complete these packets in order to maintain population control in IMU.

The July 8 hunger strike will get us outside support, because our demands are reasonable and this packet strike is the most effective solution to create lasting changes for our brothers and sisters across the state who will be assigned to IMU in the future.

We struggle for change. 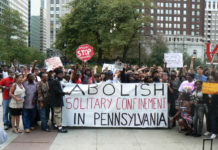 Launching a campaign of resistance

Sundiata Acoli, political prisoner for 39 years, wins appeal and is up for parole again

Commemorating the 40th anniversary of the assassination of Comrade George Jackson