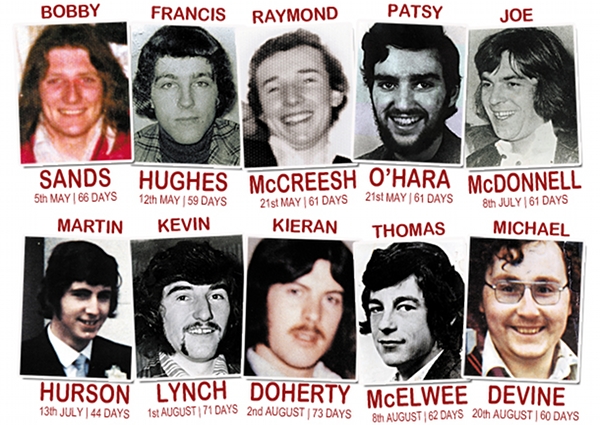 Word from within is that California’s prison hunger strikers have been studying the Irish hunger strike of 1981 led by Bobby Sands, in which 10 Irish republicans died because of the stubborn refusal of Margaret Thatcher to recognize them as human.

California Gov. Jerry Brown and California prison officials could learn from the Irish hunger strike as well, which is told in Denis O’Hearn’s book, “Nothing But an Unfinished Song: The Life and Times of Bobby Sands,” and Danny Morrison’s book, “Hunger Strike.”

To be clear, there are sharp differences between the two hunger strikes. The main difference is that the Irish republicans were arrested as armed combatants against British rule over Northern Ireland. The California hunger strikers originally were convicted as violent criminals and steadily have become political under the punishing regimen of the prison system, especially the system of solitary confinement.

In both cases, however, the British and California prison authorities considered them as nothing but criminals. As one prison guard remembered years later, “At first we thought they [the Irish] were dirty animals,” as did much of the public.

Similar perceptions rule the minds of California officials and many observers today. But such perceptions can be blinding and easily become the rationale for an indifference toward the possibility of death.

It is time for California officials to practice the subtle arts of conflict resolution instead of acting with arrogant impunity.

The first Irish hunger strike began in 1980 and lasted 53 days. It was suddenly called off to save the life of one of the hunger strikers who was close to death. According to Danny Morrison:

“The British side promised to introduce progressively a liberal prison regime. However, as soon as the hunger strike ended, they reneged and the ‘concerned’ politicians all but disappeared, some smug with the impression that the morale of the protestors and the back of the protest had been broken.”

Because of the failed promises, the prisoners decided on a second hunger strike, which resulted in the 10 deaths.

That is where things stand in California at the moment. The governor, through his prison czar Jeffrey Beard, has conducted a campaign to demonize the hunger strikers as nothing more than criminals who want to seize and control the institutions on behalf of their violent gangs. There can be no negotiations with these terrorists, the California officials insist, until they unilaterally end their hunger strike.

On the other side, having been disappointed with the results of their 2011 hunger strike, the striking prisoners are reluctant to end their fasting in exchange for words.

The tide is turning against California’s position. The conservative U.S. Supreme Court has ruled that California is in violation of the Eighth Amendment ban on cruel and unusual punishment. The steam has run out of the 30-year crusade to impose mass incarceration, including solitary confinement, on so many at such taxpayer cost. California voters oppose spending more on prisons and have voted to reform the Three Strikes Law.

The governor, through his prison czar Jeffrey Beard, has conducted a campaign to demonize the hunger strikers as nothing more than criminals who want to seize and control the institutions on behalf of their violent gangs. There can be no negotiations with these terrorists.

Margaret Thatcher and her prison guards once were proudly adamant of the policies that demonized, incarcerated and executed so many Irish republicans. That pride has faded into embarrassment today among most citizens of the U.K., as they watch former IRA prisoners and even their Loyalist paramilitary adversaries take part in peacefully reforming the old order.

It is time for California officials to practice the subtle arts of conflict resolution instead of acting with arrogant impunity by imposing unbearable conditions on inmates, most of whom already are being punished for life.

Tom Hayden, veteran of 50 years of activism, politics and writing, was a leader of the student, civil rights, peace and environmental movements of the 1960s and went on to serve 18 years in the California legislature, where he chaired labor, higher education and natural resources committees. In addition to being a member of the editorial board and a columnist for The Nation magazine, Hayden is regularly published in the New York Times, Guardian, Los Angeles Times, San Francisco Chronicle, Boston Globe and other publications. He is the author and editor of 20 books and has taught at UCLA and the Harvard Institute of Politics. He can be reached at http://tomhayden.com/contact/.

Oppression is worse than slaughter

A great rally, a great victory for the Lucasville hunger strikers

On hunger strike to be on death row