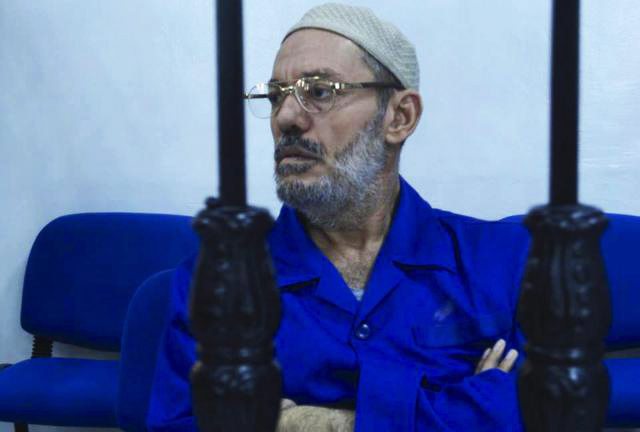 Dr. Ibrahim was once Libya’s secretary for education and is a Qaddafi loyalist. He has written extensively on the Jamahiriyan ideology or what is known as the Third Universal Theory.

Ahmed Ibrahim is a staunch Pan-Africanist and a courageous freedom fighter who, rather than fleeing the Libyan Jamahiriya during the brutal and barbaric assault on his country, stood his ground in the heroic defense of Sirte alongside the revolutionary forces and people and was later captured by an Al Qaeda-linked militia. The Western-backed terrorists of this militia tortured and taunted him while he was being held in one of the prisons that they control, and now, after a mock, illegal trial, they have sentenced him to death by firing squad.

The African Revolutionary Movement (ARM), an Afrocentric, Pan-African organization, is calling on all genuine Pan-Africanist organizations and parties, as well as human rights activists, to openly and loudly condemn this gross violation of justice and human decency and to demand the immediate release of Dr. Ahmed Ibrahim.

Also, we must demand that the African Union take the initiative and necessary measures to secure his release.

ARM will do what must be done to expose the reactionary and racist character of the Al Qaeda-linked and Arab-supremacist cabal in Libya, which is propped up by U.S.-NATO thugs.

ARM is an international, Pan-African revolutionary organization committed to the unification and total liberation of Africa and the scattered African nation. Our members are active throughout the African motherland and the African Diaspora. We come in the tradition of all those Africans, known and unknown, who dedicated their lives to the struggle for the redemption, upliftment and liberation of all Africans.

Yahaya Ezemoo Ndu is chairman and Gerald A. Perreira is international secretary of the African Revolutionary Movement (ARM). Perreira is also a founding member of the Guyanese organizations Joint Initiative for Human Advancement and Dignity and Black Consciousness Movement Guyana (BCMG). He lived in Libya for many years, served in the Green March, an international battalion for the defense of the Libyan revolution, and was an executive member of the World Mathaba based in Tripoli. He can be reached at mojadi94@gmail.com.