I am a 36-year-old socially conscious, politicized New Afrikan prison activist, jailhouse lawyer and writer. I have been held “captive” here in the Commonwealth of Virginia, the former capital of the Confederacy, for the last nearly 19 years. In my entire existence upon this earth I’ve fallen in love only twice. The first time was with my high school sweetheart. The second time was with my very first issue of the San Francisco Bay View newspaper back in December of 2012. The Bay View has had my nose wide open ever since. 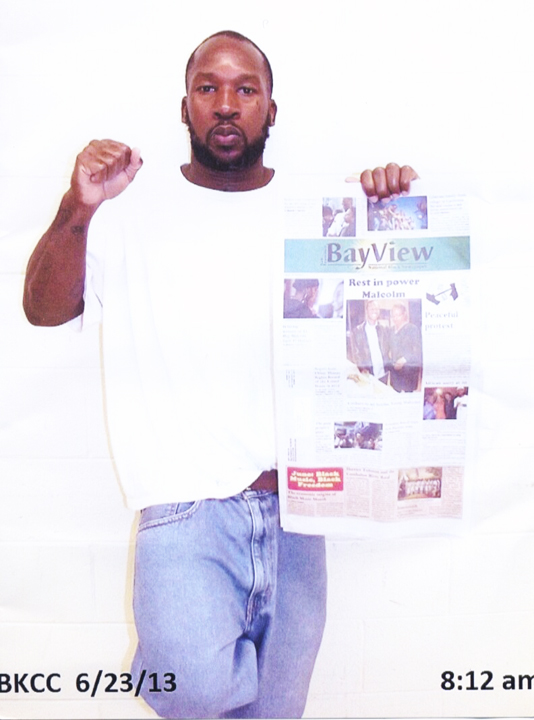 I first became politicized in the late ‘90s when I came into contact with some older, disciplined revolutionary-minded brothers who always impressed upon me the importance of reading and studying to develop and expand my political maturity and world view and in the process become the new man, who is politically conscious, creative and socially responsible and who puts politics in command of economics and will always work together for the best interests of our community.

Over the years I’ve maintained communication with some solid brothers out in the “free world” but nothing compares to the San Francisco Bay View Newspaper. Whenever I hold “her” (the Bay View) in my hands, I can feel her love, wisdom and the spirit of the revolutionary and progressive struggles of all poor and oppressed people.

After I’ve read the last article, I’ll immediately turn back to the first page and get lost in her “inward parts” all over again. When I leave her in the company of my comrades so she can infect them with her spirit of love, revolution and resistance, strength and beauty, I literally have to sometimes pry their fingers off her just to get her back. I’m smitten.

I’m confined in a prison system where there are few if any “peaceful” demonstrations, struggles or resistance amongst the prison population against the prison authorities for the abuse, injustice, inhumane conditions and exploitation which they perpetrate against the captive populace. The Bay View, which I share with my most trusted comrades, brings the nationwide prison-class struggle to us in vivid color and form. Live and direct.

My antennas are turned to the frequency of revolutionary struggle and resistance as I read articles about “the peaceful hunger strike” organized by the brothers confined at the Pelican Bay State Prison SHU, “the agreement to end all hostilities between races” organized by the PBSP SHU Short Corridor Collective and the many struggles waged by the NCTT (New Afrikan Revolutionary Nation Collective Think Tank) even as they are locked down behind the doors of their torture chambers.

The Bay View, which I share with my most trusted comrades, brings the nationwide prison-class struggle to us in vivid color and form. Live and direct.

These brothers inspired me to organize a boycott and protest movement against Keefe Commissary Group, its subsidiary Access Secure Pak and their spring/fall/holiday package program. Through a small collective I attempted to spread the message that all prisoners (Blacks, Whites, Browns, Yellows), regardless of political or organization affiliations or sexual orientations, should all join hands in solidarity in peacefully boycotting Keefe Commissary Group and Access Secure Pak by refusing to order a spring/fall/holiday package and writing a letter to Keefe and Access advising them unless the prices for their products are lowered, we will no longer order packages from them.

On June 27, 2013, the institutional investigator and the building lieutenant conducted a search of my cell, in which they found memos outlining and detailing the agenda concerning the boycott. It was immediately placed on administrative segregation investigation. On July 5, 2013, I was served a Disciplinary Offense Report (write-up) for “conspiring to commit, participating in or encouraging others to participate in a work stoppage or a group demonstration,” which was written by the institutional investigator concerning the memos that were posted up on the walls in certain dormitories.

I was convicted of this Disciplinary Offense Report and given 20 days segregation. After the 20 days disciplinary segregation time was completed, I was immediately placed on indefinite Administrative Segregation (AdSeg) by the Institutional Classification Authority (ICA) because I was deemed a threat to the order and security of this prison.

I have known for some time the potential for any revolutionary, radical or progressive movement which exists behind prison walls to be infiltrated and exposed by informants and snitches and those inmates who have grown so content and institutionalized that they’re more willing to protect and preserve the system and the status quo than to challenge it.

I send a revolutionary salute and embrace to the San Francisco Bay View for giving the prison class the platform to expose the injustices of the Prison Industrial Slave Complex (PISC) and its nationwide neo-slave plantations. ALL POWER TO ALL PRISONER HUNGER STRIKERS NATIONWIDE.

As I lie in my little torture chamber, tossing and turning on my sweat-drenched bed, unable to sleep, I begin to question whether or not the ACTION I took was worth it. I recite, over and over again, a passage called “Free Your Mind: Reversing the Effects of Prison Censorship.” It says: “As for us … we are the new vanguard. The responsibility is on us to push this thing through. Those who came before us have sacrificed their freedom and their lives. Don’t call yourself a revolutionary if you aren’t ready and willing to do the same.”

I begin to feel reassured in the struggle I undertook to create change, and I felt especially empowered to embark on my own peaceful hunger strike in an act of solidarity with the entire prison nation of hunger strikers out in California. From the week of July 8 through July 15 I refused all trays. In that short week I lost 12 pounds! I would not be truthful if I told you I didn’t feel tempted to eat something during that week. But I was strengthened once again when the BBC World News, which I listen to every night, did a report on the California Prisoner Hunger Strike on WMRA 103.5 FM.

I salute those brothers locked down in SHUs at Pelican Bay and Corcoran for starting a movement that has spread nationwide and is being reported in worldwide! I have become a student of those brothers comprising the NCTT. Though I’ve never met these brothers personally, I know them through their words and spirit.

In closing, I send a revolutionary salute and embrace to the San Francisco Bay View for giving the prison class the platform to expose the injustices of the Prison Industrial Slave Complex (PISC) and its nationwide neo-slave plantations. ALL POWER TO ALL PRISONER HUNGER STRIKERS NATIONWIDE.