During his 2007 presidential campaign, Barack Obama told the Boston Globe, “The president does not have power under the Constitution to unilaterally authorize a military attack in a situation that does not involve stopping an actual or imminent threat.” 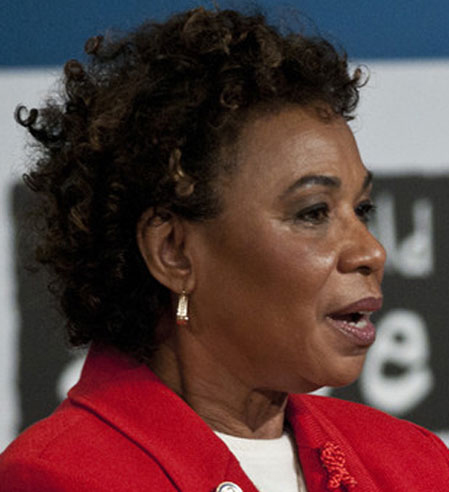 California District 13 Congresswoman Barbara Lee made it clear, on Friday, Aug. 31, that she sees no imminent threat to the U.S. from Syria and that the Constitution therefore requires President Obama to seek congressional authorization to launch a military strike. She has persuaded 64 members of Congress to sign a letter calling on the president to instead initiate a debate and seek congressional authorization before taking military action.

Barbara Lee: I don’t see Syria as an imminent threat. We need to engage in a debate so we can really figure out a way forward.

The use of chemical weapons – these are crimes against humanity – these are the most horrific type of crimes. We’re not even challenging that.

What’s important, though, is that when you engage our military, we have to look at the unintended consequences, the ramifications for more violence, more chemical attacks, more vulnerable populations, more civilians being killed. And regional hostilities that could take us into an unending war, which of course the president and the secretary of state do not want to happen.

Ann Garrison: With regard to the issue of imminent threat, isn’t it unlikely that Syria even has an air force that could come here or get even close without being shot out of the sky?

Barbara Lee: Well, Syria’s engaged in a civil war right now and over 100,000 people have been killed. Whether Syria poses a national security threat, either immediate or long term, is what the president and the secretary of defense have to address.

California District 13 Congresswoman Barbara Lee made it clear, on Friday, Aug. 31, that she sees no imminent threat to the U.S. from Syria and that the Constitution therefore requires President Obama to seek congressional authorization to launch a military strike.

We’re saying that we absolutely think we should be called back into Congress to engage in a debate and to vote up or down on whether we believe this warrants the use of force.

Ann Garrison: Regarding the crime against humanity, the use of chemical weapons, doctors and epidemiologists have reported year after year that Iraq, particularly Basrah and Fallujah, are suffering unforeseen rates of birth defects as a consequence of our toxic munitions, including depleted uranium and white phosphorous. Doesn’t this make the threat to bomb Syria for alleged chemical weapons use inconsistent to say the least?

Barbara Lee: Well, let’s stick with Syria right now. We have to explore that a little bit further, and I hope that we can take back the House, so we hold hearings on what you just said, in terms of any unfortunate ramifications and negative impacts and unintended consequences. We know people around the world are suffering from all kinds of disabilities and illnesses as a result of warfare.

What’s important is, in this instance, we need to talk about the ramifications, the impact and the possible regional outbreaks that could occur and, in terms of regional stability, what that means, if in fact the use of force is engaged in.

Ann Garrison: Has the Congressional Black Caucus taken a stance?

Barbara Lee: I wrote a letter which is signed by 64 members. We have not been in session, first of all. And so we have 64 or 65 Democrats who have signed a letter to the president asking that he come forward and ask for this authorization before the use of force is begun. Many members of the Congressional Black Caucus are on that letter.

Update: Thirteenth District Congresswoman Barbara Lee e-mailed her constituents shortly after this was written to say that President Obama has called for a congressional debate and vote before taking military action in Syria. She concluded by saying that “blindly rushing into yet another military effort will not help. When there’s a fire, the proper response is not to pour gasoline on it.”