San Francisco – About 40 Bayview Hunters Point residents, including about a dozen small children, rallied in the park at Lillian Court in the Shoreview housing complex on Thursday, Aug. 29, to demand that it be rendered usable and safe for children. The grass there is yellow and parched, broken glass could be seen by the picnic tables, and a large area of the park, where there used to be a play structure, has been fenced off for more than 10 years, leading many residents to believe there are toxic or other problems that make it unsafe. Behind the fence, the park is overrun with weeds and other health and safety problems including poor lighting. 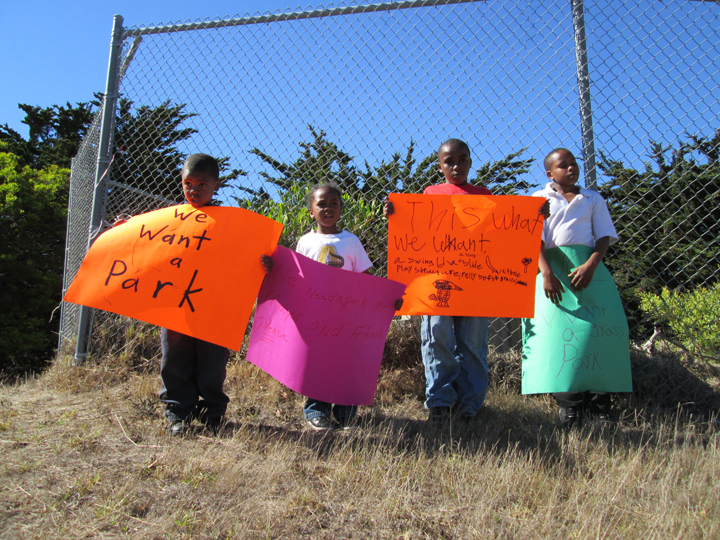 Children held signs highlighting the lack of amenities in the park – amenities that would be taken for granted in almost any other neighborhood. They read, “We need somewhere to play. Help us!” and “This is what we want: a long slide, a play structure, a swing.” Chants included: “What do we want? A park! When do we want it? Now!” “No park, no peace!”

The Shoreview Tenants Association organized the event in conjunction with the Alliance of Californians for Community Empowerment (ACCE) and the Housing Rights Committee of San Francisco. Many of those in attendance were long-time residents of Shoreview, but they received support from a dozen residents of the larger Bayview Hunters Point community.

Mawuli Tugbenyoh, an aide to District 10 Supervisor Malia Cohen, also made an appearance. He promised that the “process” of fixing up the park was “already underway” but said there was “a lot of bureaucracy” to go through in the city.

Indeed, to decipher who is in charge of the park is frustratingly convoluted. Calls to the Redevelopment Agency show that it still technically owns the park. But Redevelopment is nothing but a shell since Gov. Jerry Brown’s moves to close all California redevelopment agencies in his quest to balance the state budget.

Shoreview residents, however, say bureaucratic turf wars between government agencies are not their problem and that Cohen should do more to advocate for the community. “I’m requesting to have a meeting with her, because I’d like verification,” says Belinda Rollins, vice president of the Shoreview Tenants Association. “We’ve been promised so many years. We need action.”

“If this park were in any other neighborhood, it would have been fixed up by now,” says Janice Powell, president of the Shoreview Tenants Association.

Because the park has been inaccessible for so long, they say neighborhood children have nowhere to play. Hunters Point has the highest concentration of children in San Francisco – the median age is nearly seven years younger than in the city as a whole. But its parks are the worst maintained.

Residents say that inaction by city officials is symptomatic of the not-so-benign neglect of the Bayview Hunters Point community in general. “If this park were in any other neighborhood, it would have been fixed up by now,” says Janice Powell, president of the Shoreview Tenants Association, a group that has formed in the past few months to improve conditions in the community.

“But when it’s our kids who are suffering, somehow problems get shoved under the rug. We’re tired of being ignored.”

Rollins agrees. She says that if the park were in another community, “it would have been up and running at this point. Unfortunately it’s a low-income and minority community.”

Julien Ball is a member and outreach organizer for the Alliance of Californians for Community Empowerment (ACCE). He has been a long-time activist in fights for housing justice and criminal justice reform in both Chicago and San Francisco. He can be reached at julienball@hotmail.com.