All too often, apologies are just empty words that aren’t worth the air they ride on. But there are times when an apology actually has meaning and impact. That was the case on Saturday, Sept. 22, 2013, in Tulsa, Oklahoma, when Chief Chuck Jordan of the Tulsa Police Department apologized to the Black people of the city for the 1921 attack on “Black Wall Street.”

He apologized for the actions of the police department at that time. According to accounts of what happened that day, some of the police stood by while white mobs set fires. Other members of the police force actually participated in the arson and murder that occurred on that day.

Chief Jordan spoke at the opening ceremony of “Literacy, Legacy and Movement Day” in Tulsa. It was an event meant to promote cultural awareness, literacy, health and entrepreneurship among African Americans in the community. In his apology, Chief Jordan said:

“I cannot apologize for the actions, inaction and dereliction that those individual officers and their chief exhibited during that dark time. But as your chief today, I can apologize for our police department. I am sorry and distressed that the Tulsa Police Department did not protect its citizens during those tragic days in 1921.

“I have heard things said like, ‘Well, that was a different time.’ That excuse does not hold water with me. I have been a Tulsa police officer since 1969 and I have witnessed scores of ‘different times.’ Not once did I ever consider that those changing times somehow relieved me of my obligation to uphold my oath of office and to protect my fellow Tulsans.”

There are times when an apology actually has meaning and impact. That was the case on Saturday, Sept. 22, 2013, in Tulsa, Oklahoma, when Chief Chuck Jordan of the Tulsa Police Department apologized to the Black people of the city for the 1921 attack on “Black Wall Street.”

The event to which Chief Jordan is referring was the 1921 attack on the Greenwood neighborhood of Tulsa, which at the time was considered the wealthiest Black community in the United States.

Just before dawn on June 1, 1921, thousands of white men driven by mob-induced, alcohol-fueled racial hysteria launched a deadly assault on the Greenwood District. The attack was in retaliation for the highly publicized but false allegation that a Black teenage boy had assaulted a white teenage girl. The mainstream newspapers sensationalized the story and called for retribution. It is reported that nearly 10,000 armed white men responded to the call.

They systematically burned down every home and business in the district. They shot at every Black man, woman and child that they encountered. Most of the Tulsa Police Department was present. They either watched the carnage from the midst of the violence or they actively participated in the shootings and arson.

There were many reports of private planes flying overhead and dropping firebombs onto the buildings and shooting at Black people trying to escape. The pilots were allegedly also transmitting radio messages to the police informing them of the locations of terrified Black people who were running and/or hiding from the mob. Hundreds of African Americans were wounded. They were left to die in the streets or escaped without treatment because the Greenwood Hospital, with an untold number of its patients, was burned to the ground. 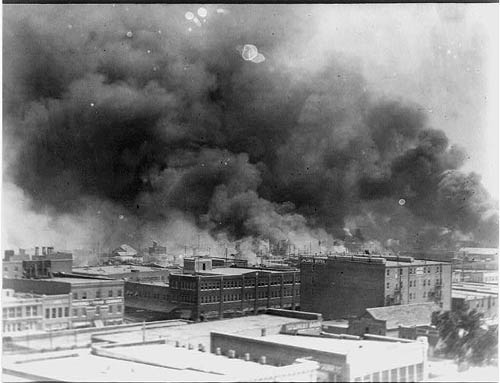 The destruction of the community was total. Over 35 city blocks were incinerated. More than 10,000 Black residents were left homeless. The official death count of Black people on that day is 37. Witnesses reported upwards of 300 killed.

In 1997, Oklahoma state Senate and House of Representatives sanctioned the Oklahoma Commission to Study the Tulsa Race Riot of 1921. In February 2001, that commission issued its final report. That report confirmed that over 120 unmarked graves were dug within the first two days after the riot in which the bodies were dumped without coffins. Because of rumors of mass graves, a team of forensic scientists investigated and identified probable sites where mass graves could be located. Funds have not yet been allocated to exhume the sites.

Before the attack, Greenwood was a prosperous community in the midst of oil rich Oklahoma. It was home to several Black millionaires and a vibrant middle class. Because of Jim Crow, Black neighborhoods and businesses were separated from white neighborhoods. Black people were restricted to the northern end of the city.

The Black population took advantage of the racial split by creating a separate and booming economy. It gave African Americans the opportunity to effectively express their entrepreneurial spirit. As a result, the Greenwood district became a famous entrepreneurial mecca for African Americans. Much to the chagrin of the surrounding white communities, Greenwood was not only the wealthiest Black community in the United States, it was one of the wealthiest communities in America – period!

The main drag was Greenwood Avenue, which was a buzzing commercial hub for dozens of business along a two-mile stretch. Within the community was a profusion of Black-owned businesses. These included a hospital, medical and law offices, plentiful grocery stores, successful restaurants, two newspapers, a library and two movie theatres. There was also a small airport to accommodate the several planes owned by the community’s elite and a successful 65-room hotel to accommodate visiting Black business people and celebrities.

The destruction of the community was total. Over 35 city blocks were incinerated. More than 10,000 Black residents were left homeless. The official death count of Black people on that day is 37. Witnesses reported upwards of 300 killed.

The community gained national status after Booker T. Washington, who had appeared for a speaking engagement in Tulsa, labeled the Greenwood neighborhood “the Negro’s Wall Street.” That name later was transformed into “the Black Wall Street.”

The white population, on the other hand, preferred to call it by other names with the most polite being “Little Africa.” They were not particularly happy by the obvious prosperity of Greenwood. The success of the Greenwood District exposed the lie of the various myths about the incompetence of Black people, their lack of intelligence and inability to function in the world of business.

It also was a source of friction for whites because it was more successful than most of the white communities in Tulsa. So, envy and resentment against Greenwood’s success was pervasive among whites in Tulsa during the early part of the 20th century.

The attack on Black Wall Street in 1921 was covered up by Tulsa’s municipal government and the Oklahoma state government for many years. The official stance was that it didn’t really happen or that whatever may have happened was due to the actions of the Black people. It did not appear in any historical text books or official archives. 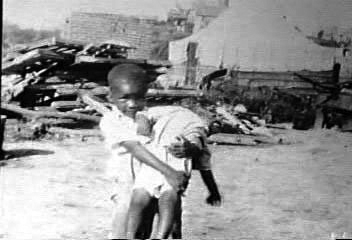 There were many years of behind-the-scenes legal battles by attorneys working on behalf of the Black people falsely charged with inciting the riot. In 1992, 75 years after the event, all charges were dismissed and the national public finally learned about the Tulsa Race Riot of 1921.

Several white people have complained to me about bringing this event back into the open. They questioned the wisdom of rehashing something that happened 92 years ago. They felt that it would only stir up anger when Black people need to forget about those unpleasant moments in the past and move forward.

Chief Jordan admitted that some may question whether it’s productive to linger over the events of 92 years ago. He believes, however, that such an acknowledgment and apology for the misdeeds of the past will help the community move on. Jordan said the lack of healing has caused a lot of problems, including a legacy of distrust of the police department among some residents that has been handed down over several generations.

Rev. Andrew Bozeman’s spiritual vision is revival of the mental, spiritual and economic empowerment of African Americans. His life mission is to help transform African American communities from symbols of poverty, frustration and blame to centers of prosperity, power and pride. He can be reached at bozedev@gmail.com.