The Morongo Band of Mission Indians near Palm Springs continues its tradition of giving as it provides another 11,000 turkeys statewide to help those in need

San Francisco – Five San Francisco groups that help provide the homeless and the less fortunate with a hot meal on Thanksgiving received 1,000 turkeys Friday donated by the Morongo Band of Mission Indians near Palm Springs. 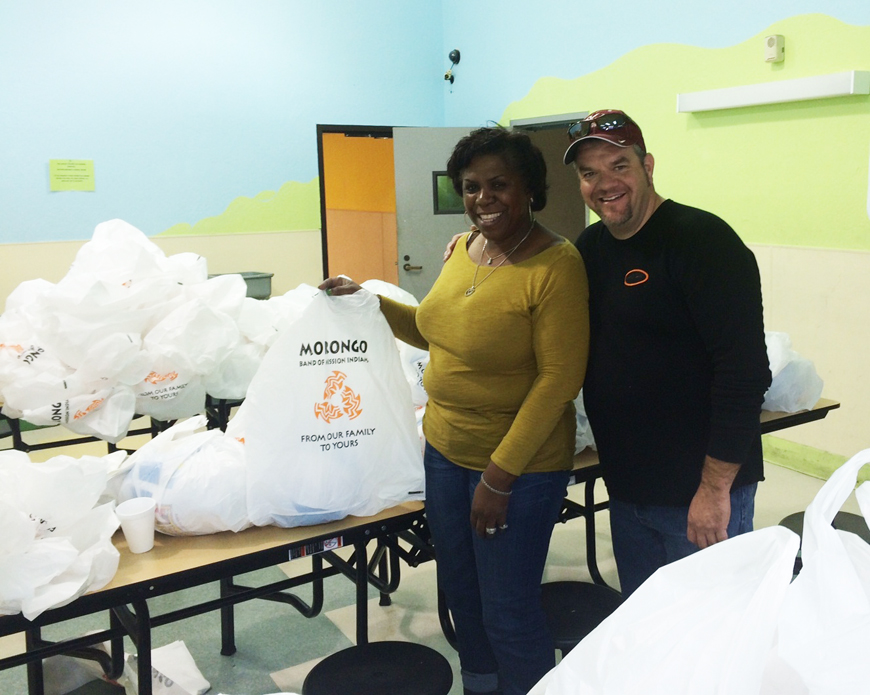 Morongo presented the turkeys to Glide Memorial United Methodist Church, the United Council of Human Services and the San Francisco African American Chamber of Commerce. The tribe also presented the Chinese Hospital of San Francisco and the Chinatown Community Development Center with dozens of turkeys which will be used to prepare holiday meals or distributed directly to those in need in the city’s Chinatown.

The donation marks the 14th year that Morongo has provided turkeys to San Francisco-based groups. The turkeys are part of the more than 11,000 turkeys that Morongo gave to charities, churches and food banks across the state this year alone.

“In these difficult economic times when so many are struggling, the Morongo Band of Mission Indians has once again provided the blessing of a hot Thanksgiving meal to those in the greatest need in our community,” said Gwendolyn Westbrook, executive director of the United Council of Human Services, which operates Mother Brown’s Kitchen, a much loved landmark in Bayview Hunters Point. “We appreciate Morongo’s generosity, which truly embodies the spirit of Thanksgiving.”

Five San Francisco groups that help provide the homeless and the less fortunate with a hot meal on Thanksgiving received 1,000 turkeys Friday donated by the Morongo Band of Mission Indians near Palm Springs.

Morongo Tribal Councilman Tom Linton, who presented the groups with the donated turkeys from the Morongo Indian Reservation, said the tribe has a long relationship with the San Francisco organizations for which it has a deep respect.

“These groups provide vital services to the San Francisco community and Morongo is honored to be partnering with them once again to provide food and care to others this Thanksgiving,” Linton said. “At Morongo, we are fortunate to be able to offer assistance in areas across the state where needs exist. Even when our tribe was struggling to survive, giving always remained a part of who we are, and that will never change.”

With this year’s donation, Morongo’s 28th Annual Thanksgiving Outreach program has provided over 1 million holiday meals to the less fortunate across California.

“We thank the Morongo Band of Indians for their caring. They have been a consistent supporter of the Chinatown community,” says Rev. Norman Fong, executive director of Chinatown Community Development Center.

The 35,000-acre Morongo Indian Reservation lies at the foot of the San Gorgonio and San Jacinto Mountains, overlooking Banning Pass. From a small bingo hall in 1983, the tribe’s gaming facility, Morongo Casino, is one of the largest in the nation. Having expanded into non-gaming businesses, the tribe, a sovereign nation, has become the largest private sector employer in the Banning-Beaumont region, employing over 3,000 people. Learn more at http://www.morongonation.org/.