Archbishop Wayne King and Mother Marina King, founders of the Saint John Coltrane African Orthodox Church, were inspired when they saw John Coltrane perform in San Francisco in 1965. Archbishop King speaks of this as a “sound baptism” which touched their hearts and minds. 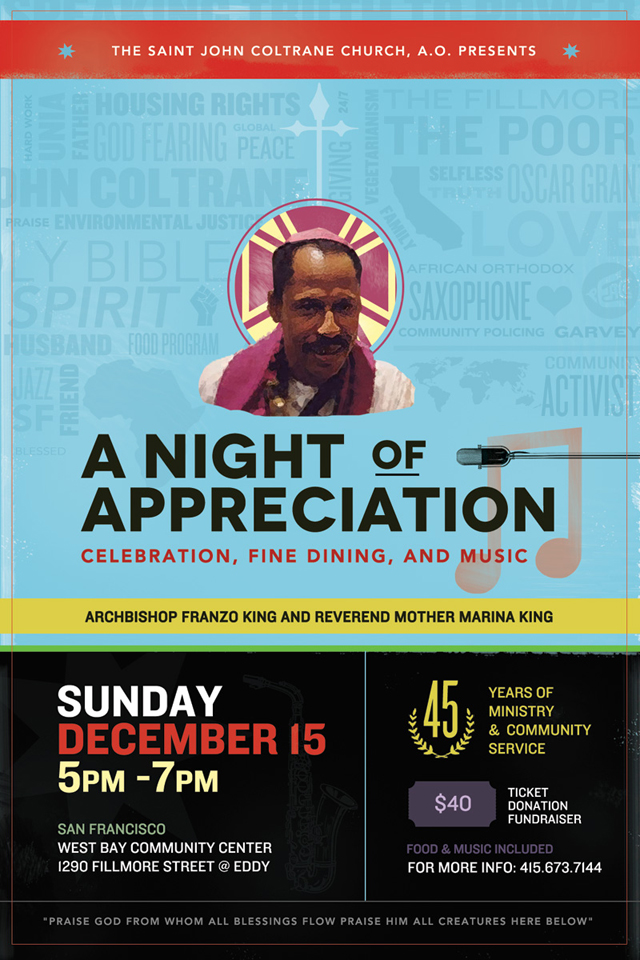 The couple founded the “One Mind Temple Evolutionary Transitional Body of Christ” in 1971 and have been serving the community and spreading Coltrane Consciousness ever since. In 1982, the community was incorporated into the African Orthodox Church, and John Coltrane was canonized as a saint. Coltrane’s most important work, “A Love Supreme,” became the foundation for the liturgy at the church.

Archbishop King and Rev. Mother Marina will be honored on Sunday, Dec. 15, from 5:00 to 7:00 p.m., at an evening of fine dining, divine music and testimony. Keynote speaker will be Rev. Christopher Muhammad. The event will be at the West Bay Community Center, 1290 Fillmore St. near Eddy in San Francisco.

The church has sponsored numerous community outreach events, including years of serving meals to the hungry, advocating for social justice and speaking out against foreclosures and evictions.

Because of their ministry and community service in San Francisco, their congregation has grown beyond the confines of San Francisco to include the whole globe. The weekly Sunday liturgy welcomes visitors from every continent.

The work of the church has been covered by the New York Times, BBC News (including video of a service), Associated Press, Jazz Journal (UK), to name a few, and numerous videos and documentaries. Saint John Coltrane said, “My music is the spiritual expression of what I am – my faith, my knowledge, my being,” and Archbishop King and Mother Marina King have been bringing that message to the global community for 45 years.

Tickets for the event, including dinner and music, are $40, or $400 for a table of 10, and must be purchased in advance through our secure website, www.coltranechurch.org.

Saint John Coltrane said, “My music is the spiritual expression of what I am – my faith, my knowledge, my being,” and Archbishop King and Mother Marina King have been bringing that message to the global community for 45 years.