Twenty-six year-old Congolese American science student Alima Kasongo should inspire anyone facing enormous odds, most of all her own Congolese people, who have faced the most enormous odds thrown at any people in the world for so many years. For good reason, many have said that if there were peace in the Democratic Republic of the Congo (DRC), there would be peace on earth, because so many ruthless foreign interests are so determined to push Congo’s inconvenient Africans out of the way to get to what they have – oil, gas, timber, cobalt, copper, and every other mineral essential to the electronics and defense industries – that it would be a near superhuman feat to stop them, like that Alima has just achieved.

Alima has been determined to become a geneticist, first by completing her bachelor of science degree at Otterbein University in Westerville, Ohio, which she has just done, despite suffering from terminal cancer. On Monday, Otterbein University’s president, dean of students and faculty members came to Nationwide Children’s Hospital to present her with her bachelor of science of degree.

Alima’s sister Talubezie Kasongo wrote this about the strength Alima summoned to complete this degree:

“As Alima’s older sister, I want to express how proud I am of her. I know how hard she worked to receive this degree. Even during the chemo and radiation treatments, my sister was still enrolled in school part-time. She split her time between her treatments and class. We would spend eight hours in the car driving between Nationwide and OSU Medical Center, but sister still returned home and studied. I helped administer her exams [Talubezie holds a master’s degree in public health] when she could not make it to class.

“Even when she suffered from pleural effusion, my sister was still in the hospital Skyping her lectures and preparing for her exams. She only needed a few more classes to complete her degree. This accomplishment is a result of hard work, determination, and the support of Alima’s professors and the school. We are so grateful for the support that she has received from her professors, classmates, and the school, especially Dr. Simon Lawrence. This would not have been possible if it was not for Dr. Lawrence, her adviser. You mean the world to me and my family, Dr. Lawrence. Thank you for supporting my sister and all of us.”

I myself have known Alima only through the Internet, where she has been one of my favorite Facebook friends since 2008, because she is so devoted to peace and justice in the DRC, and because I was then, as a journalist, becoming determined to sort my way through all the evidence to get to the truth of why the DRC and its neighbors, Uganda, Rwanda and Burundi, became such killing grounds in the ‘80s (Uganda), ‘90s, (Uganda, Burundi, Rwanda and DRC), to now (DRC). 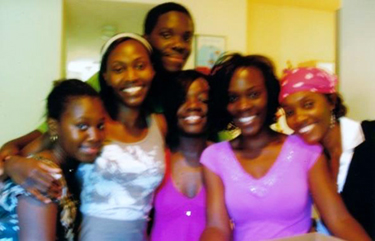 Alima and her family came to the U.S. from the DRC as political asylum seekers, and though she never stopped loving her own Congolese people and “breaking the silence” about their struggle, she became very much an African American as well. She and her sister Talubezie and I all love Aaron McGruder’s The Boondocks so much that we know most all the lines of many episodes by heart, just because we all watched them so many times. We can readily communicate just by dropping a line or two we all readily recognize.

I remember an early exchange in which she said she was still coming down from Friends of the Congo’s annual Congo Week events at college and university campuses. I think I got to know her well enough to know how much she’d love to see Huey Freeman resolve to Save the Congo! drag Riley and Grandpa on board, and leave Uncle Ruckus to genuflect before a statue of Robert E. Lee.

Like Huey, Alima and her sister Talubezie HATE Black Entertainment Television and its commitment to the destruction of Black people, as does Huey Freeman, who went on a hunger strike in The Hunger Strike episode and announced, “This hunger strike will be taken off the air until BET is taken off the air, its offices are shut down, and all its top officers commit Japanese ritual suicide.”

Alima can be as wicked as The Boondocks. I still remember her hysterical Facebook post, “How to Be a Rapper,” in which she ragged on rappers with gold and diamonds – quite likely from the DRC – in their teeth, on their fingers or draped around their necks while they glorify violence and misogyny. Lil’ Wayne is one of her favorite targets.

Many people list grandiose job titles under “Work” on their Facebook pages, but last time I noticed Alima’s she was identifying her work as “patty pusher, mop pusher and fry girl at McDonald’s.” Must have been the summer or after school job, but she didn’t bother to self-aggrandize by adding that she was also studying to be a geneticist. 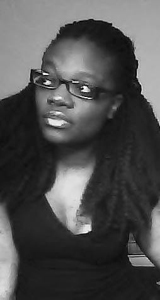 Fact is, Alima has such an acute b.s. detector that I’m struggling not to trigger it by getting corny about how awe inspiring her completion of that bachelor of science degree is. My first headline for this was, “Congolese American Alima Kasongo Pan African inspiration,” but in the background, I could hear Alima’s b.s. detector going off, and reworded it, imagining Alima, Huey, Riley and Talubezie all flying through the air screaming, “Git yo’ hands off the Congo!”

One of my own brothers survived Hodgkin’s lymphoma and I remember how thoroughly miserable he sounded, when I’d call him on the phone after his wife drove him home from chemotherapy sessions. After one, I remember him saying that he was sure chemo would one day be remembered as a treatment as barbaric as leaching. But Alima Kasongo came home and studied, to complete that degree, after undergoing chemo. I’m not that tough, not even remotely. I cannot imagine myself finding such strength and I can just barely imagine Alima doing so, even though the evidence is there, attested to by her sister, professors, college advisor, classmates and even the Otterbein University president.

As multinational mining corporations prepare their way into Congo, building dams to power the exploitation, and mouthing slogans about the healing power of the private sector, without even acknowledging the millions of Congolese who have died in 20 years of wars engineered by the U.S. and their Western allies, I wish the Congolese people similarly superhuman strength.

And if I triggered Alima Kasongo’s b.s. detector with that, I’m sure she’ll let me know.

Alima and her sister Talubezie hate BET as much as Huey Freeman. Alima would love to see Huey go on his next hunger strike to Save the Congo.