In 1989, the following message was released to the Christian world in the form of an open letter by the revolutionary Muslim leader and martyr Muammar Qaddafi. Qaddafi is one of the few Muslim leaders who truly understood the revolutionary doctrine of Tawheed, recognizing the oneness of God and God’s creation. 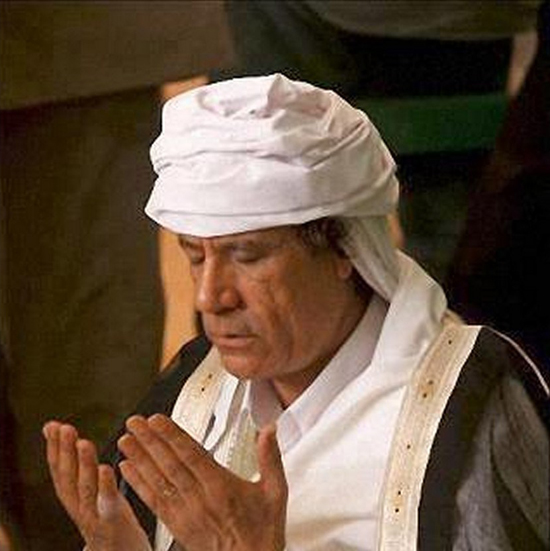 He dedicated his life to the task of trying to unite us in the fight against tyranny for the good of all humankind. In this New Year’s message, Qaddafi invites all believers to enter into reflection and dialogue to solve the crisis confronting humanity.

Twenty-four years ago it was sent all over the world, but of course it was suppressed and remained largely unpublished. As we approach a new year, the Executive Committee of ARM (African Revolutionary Movement) has re-released this message because it is as timely today as it was when it was first issued.

We must heed the Leader’s words if we are to overcome the nefarious forces which seek to drive a wedge between African and African, African and Arab, Arab and Arab, Muslim and Muslim and Christian and Muslim. This mayhem is having a devastating impact in Africa, the so-called Middle East, an area that we refer to as Afrabia, and the entire world. Certainly it is only the forces of white supremacy and imperialism that can benefit from such division and chaos.

An open letter to the Christian World from the Brother Leader

All the people of the world and perhaps heaven’s angels too have grown weary of repeatedly exchanging the age old, false congratulation of “Happy New Year.”

Heads of state send such congratulatory expressions to one another while many of them proceed to commit actions which make the New Year an unfortunate, miserable and deadly one. Could we not meditate profoundly and recollect some verses from the Holy Quran, as well as the Holy Bible and the New Testament, which say: “But help ye one another unto righteousness and pious duty. Help not one another unto sin and transgression.”

How much the world needs Christ again! We need to abandon the excessive drinking, drug taking and immoral acts that people are encouraged to engage in around the world on every New Year’s eve and instead, on this particular night, we should go to places of worship to pray, ask forgiveness and to reflect upon the divine law and the way of life it prescribes for us all.

We must understand that we are far from the teachings of Christ and very close to the teachings of Satan. The great and rich powers spend fortunes to develop and manufacture nuclear weapons, intercontinental missiles, space programs and techniques to advance their psychological warfare programs at a time when all the peoples of the earth are suffering from disease, malnutrition, starvation and the exorbitantly soaring cost of living.

These powers are led by Satan indeed. Their book is neither the Holy Quran nor the Holy Bible.

We are badly in need of a reiteration of the teachings of Christ where we shall find him calling for unity and saying, “Hands off Palestine, the birthplace of Christ – Grace be upon him – and hands off all the oppressed, colonized and persecuted peoples.”

How much the world needs Christ again! We need to abandon the excessive drinking, drug taking and immoral acts that people are encouraged to engage in around the world on every New Year’s eve and instead, on this particular night, we should go to places of worship to pray, ask forgiveness and to reflect upon the divine law and the way of life it prescribes for us all.

I know that the conceit of man and his straying from the right path is far stronger than my outcry, but nonetheless, I am offering the world these words. Let us remember this phrase from the Holy Bible: “AND IN THE BEGINNING WAS THE WORD …”