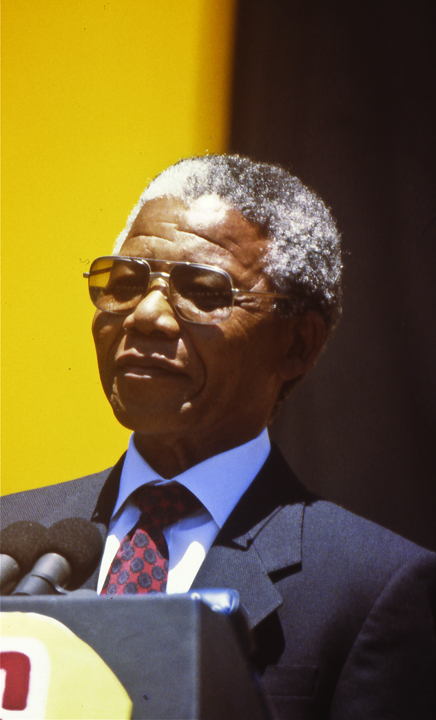 Baba Mandela passed today after a lengthy illness. Though he was not without faults, he was a great man and a decent human being who loved his people so much he literally gave his liberty for their freedom. He sacrificed his life and his life with his family for the liberation of South Africans through the African National Congress, an organization he, as a young attorney, helped found.

In Jo’burg at the Anti-Apartheid Museum I read what he wrote in his letters to his family. His apologies to his daughter who missed him and didn’t understand why he wasn’t there with him is a beautiful and understanding letter from a father to his child.

He was 95. My great aunt made 95 Sunday, Dec. 1. Ninety-five is a significant length of time to be around. At 95, one truly has a bit of perspective on life. One sees trends and recursive patterns those younger might miss, even the more astute.

I remember getting up really early to watch him leave the prison holding Mama Winnie Mandela’s hand. And I was on stage when Mandela came to Oakland after his 27 years on Robben Island.

That Saturday afternoon, the Oakland Coliseum was full, as Vukani Mawethu sang as part of the Bay Area Mass Choir. My friends Monica and Hayward sat in the audience with my children, who spent many Wednesday nights at Finn Hall in Berkeley studying or playing as we rehearsed and were often dragged to protest marches and anti-Apartheid events for South Africans.

The Honorable Ron Dellums, still in Congress, was there on stage too. Baba Harry Belafonte nearby. I remember thinking, my God the man is so handsome (smile).

My kids saw me carrying a list that I checked before I purchased anything for years. It was to make sure the businesses that produced the products I purchased, whether that was toothpaste or bath soap, breakfast cereal or airline tickets, were not invested in South Africa. I was about to take all my money out of Security Pacific National Bank when Bank of America bought it out, and then BofA divested, just in time.

I remember learning that day on stage that Mandela had trouble standing and walking after imprisonment. I think it was neuropathy. But there he was with his queen, standing so near. I was on the first row and there he was. I was so excited. I remember reading his biography and that of Miriam Makeba, listening to the music of Hugh Masekela and Abdullah Ibrahim. 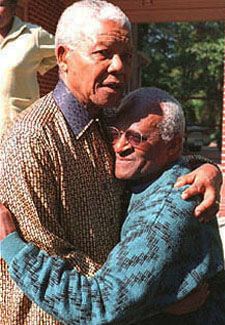 Over the decade I was active in the anti-Apartheid movement, I met many people, some no longer with us, like the late Sechaba Mokeoena, ex-pat, founder of Zulu Spear, and Thamsanq (“Sarafina” cast) who with his wife at that time, Mujah Shakir, would host South African expatriates and revolutionaries. Jikelele Dance Theater is Thamsanq’s latest project. Dumile Sadiqa Vokwana, co-founder of Amandla Poets (who is now in Capetown), with his partner at that time, the lovely vocalist Ms. Elouise Burrell, would perform often in the San Francisco Bay. We were a destination for dignitaries who were traveling worldwide trying to end this racist, repressive regime in South Africa.

So to perform for Bishop Desmond Tutu’s visit to San Francisco at the Cathedral of Saint Mary of the Assumption was not a surprise, but it was exciting to meet such a great man. Julia Morgan Theatre hosted South African playwright Selaelo Maredi, whom I visited in Alexandria Township in South Africa a few years ago. He is still producing powerful work, his focus on women and addressing the violence against women prevalent across racial and economic lines.

When Apartheid ended, we went to the Kaiser Auditorium for the elections held here hosted by Supervisor Keith Carson. A few people here, like Gerald Lenoir, co-director, Black Alliance for Just Immigration (BAJI) and one of the founders of Priority African Network, were in South Africa to witness this first vote for a Democratic South Africa. They returned with flags and ballots and many, many stories of the long lines filled with elders.

Mama Miriam mentioned at a concert at UC Berkeley’s Zellerbach Hall that she was going home to vote for the first time at age 60-70. I remembered my excitement registering to vote when I turned 18 and my belief then in democracy (smile).

I still believe, but the belief is a bit rusted or jaded now. 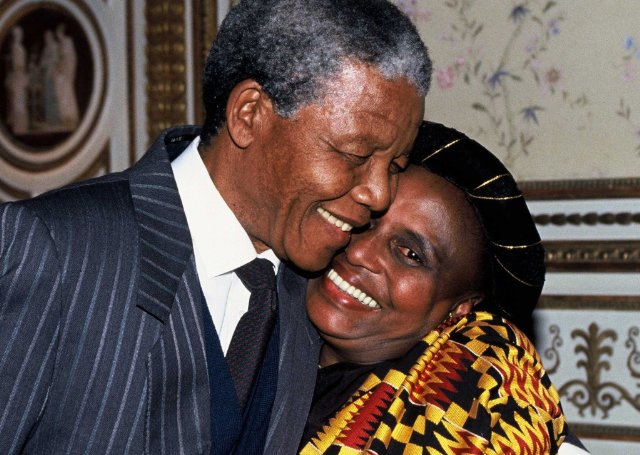 I remember going to see the first big film, “Mandela,” and then “Invictus,” the more recent film about the soccer match in South Africa with Morgan Freeman channeling Madiba. There are so many parallels between team sports and community life, especially when former enemies are asked to play together. And they did, for a moment.

South Africa, post-Apartheid South Africa is a place where sorrow resides. There is a lot of internalized pain and suffering there which makes it dangerous, perhaps more so than when the enemy was more clearly defined.

There is a new film not yet released about him: Mandela as militant (smile). I wonder if the parallel is that of Martin King on the Vietnam War and jobs for the unemployed with equal wages for equal work.

In New Orleans, there is an African Film Festival. One year I was there in the summer and South Africa was the featured country and a director from South Africa was in town at the screenings of his films. One film was on xenophobia, the other on Saartjie “Sarah” Baartman or Hottentot Venus (1789-1815) , a Khoikhoi woman from Gamtoos river in what is now known as the Eastern Cape. Other famous South Africans born there are Nelson Mandela, Steve Biko and Thabo Mbeki.

Baartman was tricked into traveling to Europe where she thought she would be a maid, instead conscripted into service as a freak in a carnival show then later held in a museum on display. The Londoners and Parisians were fascinated by her large buttocks and dark skin.

She like Ota Benga was treated worse than an animal by her European captors. Baartman was so objectified, the abuse continued after death when her dead body was mutilated – her genitalia cut off and brain dissected and pickled. The jars were on display in the Musée de l’Homme (Museum of Man) until 1974. The film covers this history and the body parts discovery in a lab and President Mandela’s request to the French government that they return the 26-year-old’s remains so she could have a proper burial. It took the French government eight additional years to craft legal language so that Africans could not reclaim stolen property. Women’s Day, Aug. 9, 2002, Ms. Baartman’s repatriated body was laid to rest, her soul finally resting in peace. See http://www.sahistory.org.za/people/sara-saartjie-baartman.

I think it is so wonderful that her people didn’t forget her once her whereabouts were published. After the screening there was a reception with the director. 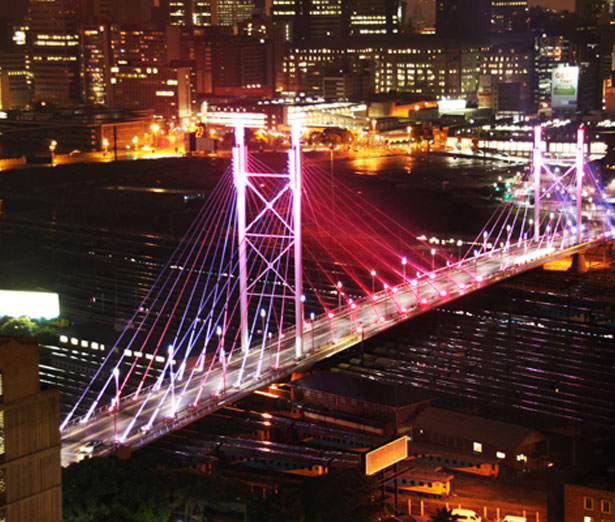 Another time I was visiting home, Ashé Community Center in New Orleans as well, there was a show and party complete with cake for Mandela’s birthday. All I remember was wondering how they were going to fit 80 candles on the cake.

While he was traveling in South Africa, Robert H. King of the Angola 3 kept getting called Madiba, Mandela’s ancestral name, his visage so strikingly like Mandela’s.

In Jo’burg there is a bridge, named after Madiba, the Nelson Mandela Bridge, that at night lights up like a rainbow alternating colors. One night three of us went out for a walk. I think it was Friday night and we wanted to find some music or something to get into. We didn’t find a party or club, but the bridge was a fun meditation at nearly midnight that night. We leaned over and watched the less fortunate prepare for a night out on the cement sofas below, the only comfort if any the somnolent night – trains shuffling into the yard to join those too poor to ride in slumber.

Mandela was like our Martin King had King lived, although King was not imprisoned for such a lengthy time period, and King wouldn’t have left Coretta (smile).

I hope his ascension is without interruption, that his sins are forgiven and that his country grows into a true free and just society, one where Black people have access to the same economic and educational opportunities as the whites.

*Excerpt from “Shosholoza. Moving Fast, Moving Strong” by Emily Stake: “‘Shosholoza’ is a South African traditional song. Its significance has changed over time, but the meaning has stayed the same. This song has inspired several communities to unify under very different circumstances. It has helped people through many times of struggle and is now sung in celebration of South Africa’s national unity.

“‘Shosholoza’ began as a folk song for the gold and diamond miners traveling back and forth between Zimbabwe and South Africa. The word Shosholoza is a combination of both Ndebele (of Zimbabwe) and Zulu (of South Africa) words meaning “to push forward, endeavor or strive.” The sound of the word itself is symbolic of the steam engine trains that carried miners through the mountains. It is said that the song helped to lessen the workload and to help create a rhythm to work to through the long and hard days.

“The song later evolved into a symbol of political status and struggle of the black community during the Apartheid era. The same lyrics, roughly translated as; ‘Moving fast, moving strong, through those mountains …’ had transformed into a symbolic phrase, encouraging a revolution. The powerful and inspirational lyrics played a part to help unify and galvanize those struggling for democracy. In Nelson Mandela’s autobiography, ‘Long Walk to Freedom,’ he described Shosholoza as ‘a song that compares the Apartheid struggle to the motion of an oncoming train.’

“Today, the song is still used and even considered by some to be South Africa’s ‘second’ national anthem. It has been the national sporting anthem of South Africa since Nelson Mandela’s presidency. It continues to be recorded again and again by famous artists like Ladysmith Black Mambazo. It was even specially recorded by the South African group, Overtone, for Clint Eastwood’s 2009 movie, ‘Invictus,’ for which it gained a tremendous amount of attention on a global scale.”

Kamau Seitu is playing music with the celestial orchestra