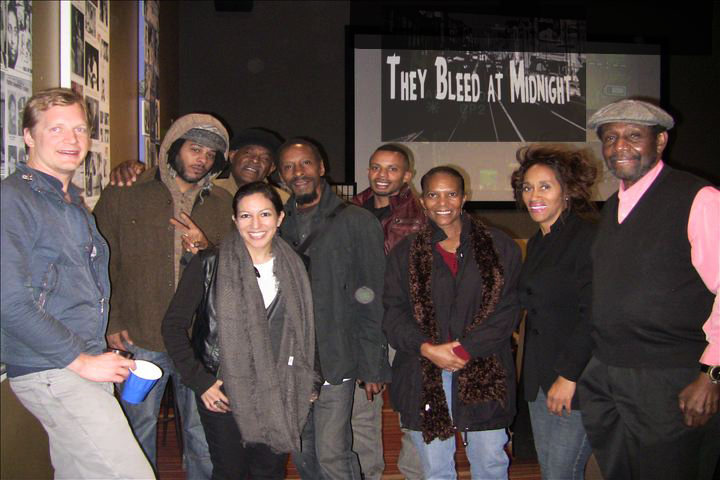 A must see, The Screening Room, a new local startup TV show, can be seen on San Francisco’s Comcast Cable Channel 29 and worldwide via BAVC.org, where you can click on Independent Media, then on Watch Channel 29 to watch the show.

The Screening Room features up-and-coming filmmakers with interviews about their films, the filmmaking journey and future outlook. We were honored to have the lovely Sheila V. Harris as our host in a recent episode of The Screening Room. She interviewed two local filmmakers, Karen Ruiz, a native San Franciscan, and Rock Hemlock, originally from Dallas, Texas.

Karen Ruiz’ film, “They Bleed at Midnight,” a short film noir, a stylish crime film, was very well received at a recent private screening at the Heritage Center Theater next to Yoshi’s in the Koret Lobby of the Jazz Heritage Building at Fillmore and Eddy Streets in San Francisco. “They Bleed at Midnight” was accepted into the first Film Noir Festival in France this Dec. 5-8. Karen attended in person.

Rock Hemlock has shot short films – he shows “Levels” in his interview – and music videos and is now going to the Academy of Art College studying film directing. When time permits, he works with the owners of Bumzy’s Cookie Shop on a new local TV series called Sheila V Talk to Me filmed live at Bumzy’s Cookie Shop at 1460 Fillmore St. at O’Farrell across from the Fillmore Center, Ken Johnson producer.

Sheila V is the TV host of Rise Up Ministries, Sheila V Talk to Me and other programs, including two episodes of The Screening Room. She is also part owner of Bumzy’s Cookie Shop along with her daughter, Toni. They are working with Linda Strickland, author of many books, on a TV series to be filmed locally.

Attention actors, models, filmmakers, producers: The San Francisco Black Film Festival is accepting films for its festival in June 2014. Get your films in early. For more info, visit SFBFF.org.

Ken Johnson, a veteran San Francisco photo- and video-journalist, can be reached at kennethj4152000@yahoo.com.