1 – Oklahoma State guard Marcus Smart, a 19-year-old top NBA draft prospect, shoved 40-year-old Texas Tech fan Jeff Orr. He has told coaches that he did so after being called “the n-word.”

2 – Orr has a wretched reputation, stretching back years, as a Texas Tech “super-fan” who gets off by yelling horrible things at teenagers. No less a source that Dick Vitale tweeted after the incident, “Guy involved in the Smart situation is NOT a fan as HE IS Classless.” Other former OSU players like John Lucas III have taken to Twitter to testify similarly about John Orr.

3 – Orr denies that he used any kind of racial slur, but he texted to a friend, “I kinda let my mouth say something I shouldn’t have, I feel bad.” 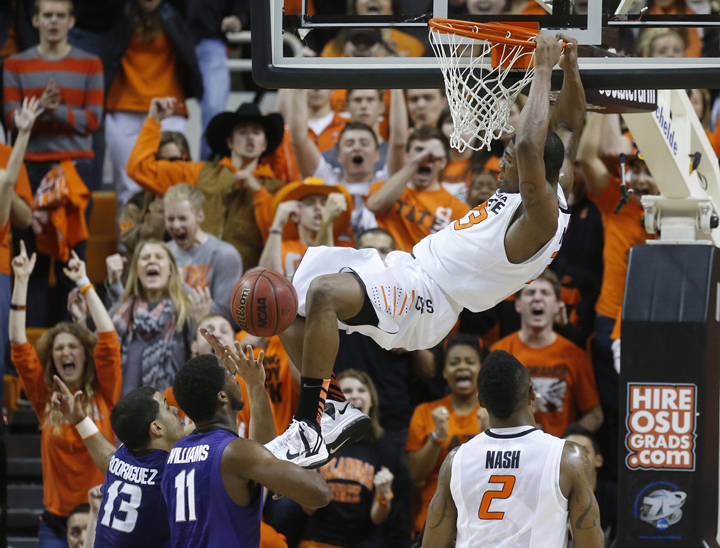 4 – Former Oklahoma State All-American Desmond Mason tweeted that Marcus Smart should have kept his cool, but also said, “I was called the N word EVERY game I played in Lubbock!”

5 – I have over the years spoken to a ton of former college basketball players who have stories about having racial slurs tossed at them by fans. They are conditioned before games to never go into the stands and just keep their anger in check, no matter the cost to their mental and physical health. They are also pressured not to speak about it to the media after games, to keep up the illusion of college athletics as some kind of innocent, wholesome endeavor. This dynamic, as much as anything, speaks to the utter powerlessness of so-called student athletes.

6 – Moments like this are exactly why the Northwestern football players felt compelled to form a union. So-called “student-athletes” have no power. They have no grievance procedure. Right now, as we speak, Marcus Smart is being told that the best thing for him, his family and his future NBA draft status would be to just apologize and take whatever slap-on-the-wrist the Big 12 or the NCAA hands down. The most upsetting part, given the economics at play, is that this is probably good advice. It might not be great counsel for Smart’s mental health, but it is for his wallet.

7 – In a just world, Marcus Smart would not be suspended at all. Instead the NCAA would enact a FIFA-style response. That means they would either bar Jeff Orr for life from ever going to another Texas Tech game or, if it is found out that “the n-word” gets dropped from the stands in Lubbock like it’s open-season on Black players, then make Texas Tech play in front of an empty arena for the rest of the season.

8 – A lot of former players are saying the equivalent of former NFL player Donte Stallworth, who tweeted: “You don’t get a free pass to say/do whatever you want to athletes because you’re a fan … just save that faux tough guy ish for the internet. If you talk about a player’s family, fire a racial slur or throw a drink on them, right or wrong, you shouldn’t be surprised at retaliation.” Players are tired of enduring this, and they should not have to.

9 – One person tweeted to me that Jackie Robinson would never have gone into the stands when called a racial slur. This “Jackie Robinson: model minority” nonsense needs to be unpacked. First of all, that was 1947. Times have changed. Second, Jackie Robinson, a husband and a father, would have risked organized violence, as in lynch mobs, if he had pursed a physical response against fans. Third, Jackie Robinson was a 26-year-old Army veteran and a college graduate from UCLA. He also carried the hopes and dreams of masses of people with every at-bat. To ask a 19-year-old Marcus Smart to act in accordance with Jackie Robinson is a ridiculous weight to ask Mr. Smart to carry.

And lastly, Jackie Robinson, if you read his searing memoir, “I Never Had It Made,” had real regrets about not going into the stands and pummeling racists with what he called “my despised Black fists.” Jackie Robinson died way too young at age 53. He and his family always believed that his early death was connected to the stress that he had to carry precisely because he kept it all bottled in on direct orders from the Brooklyn Dodgers organization and on society’s orders, shaped by the pre-civil rights times in which he played.

10 – Lastly, a note to CBS college basketball insider Doug Gottlieb: I’m not going to say why, but maybe think a little about the myriad reasons why this tweet was a bad idea: “Marcus Smart was like lil Anakin last year, now he is like Revenge of the Sith Anakin … Dark side creepin in. what’s the deal?” What’s the deal indeed.

Dave Zirin is the author of the forthcoming book, “Brazil’s Dance with the Devil” (Haymarket). Receive his column every week by emailing dave@edgeofsports.com. Contact him at edgeofsports@gmail.com. This story first appeared in The Nation, at http://www.thenation.com/blog/178292/ten-points-about-college-hoops-all-american-marcus-smart-pushing-fan#