When you hear about the streets of Oakland on television, a picture is painted of young thugs in hoodies and beanies roaming the streets in pursuit of their next victim or of underage prostitutes with too much makeup caked on their face pacing up and down the avenue. But the city that birthed the Black Panther Party is so much more than that.

Local rapper turned author Chris the Fifth is a prime example of how enigmatic and complex this city is. This extremely talented storyteller caught a case a few years ago that has him locked up for the next few, but he has not allowed his situation to mute his creativity. From behind bars, Chris the Fifth recently released his debut street lit novel, “The Bay Area’s Brooklyn Bridge,” which has been taking the streets of Oakland by storm. 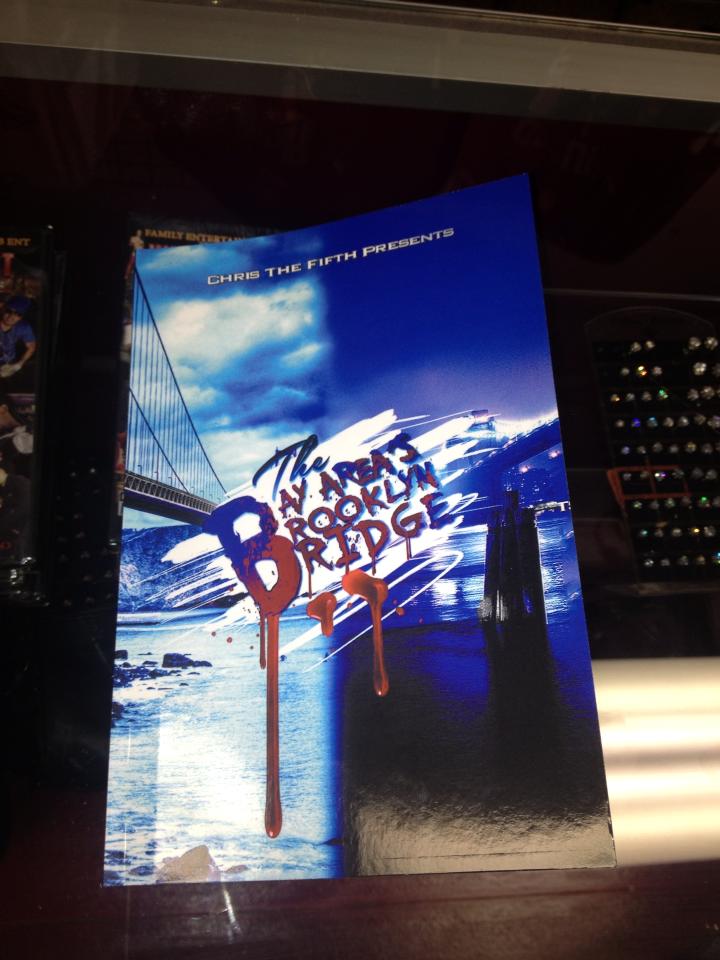 Due to the circumstances surrounding this interview, we are happy to say that we finally got a Q&A with one of the Bay Area’s most prolific writers and underground lyricists. Check Chris the Fifth in his own words …

M.O.I. JR: Can you tell us the name of your new book? And what got you into writing novels?

Chris the Fifth: Well, I just recently released my first novel at the beginning of this year, titled “The Bay Area’s Brooklyn Bridge.” It’s about a situation that spills into our neck of the woods but it initially starts in Brooklyn.

The title is metaphorical because the Bay Area is symbolic for our beloved bridges, while Brooklyn shares the same reverence for its bridges also. Furthermore, a bridge’s primary function is to connect things, hence, the Bay Area’s Brooklyn BRIDGE! But the novel that I am working on now is called “The Ventriloquist: Puppets … Pills … and Pistol Play!”

M.O.I. JR: You were a talented local rapper when you got locked up a few years back. What made you change your focus to writing? Has being locked up been conducive to you having the time to focus to be a writer?

Chris the Fifth: Honestly, my passion for writing is far deeper than music and books. I started off writing poetry before anything. Since then, writing has become a conduit for my catharsis … my canvas … my therapy!

Actually, the first book that I wrote was in my earlier years. I was fresh outta juvenile hall and I had an itch that music couldn’t scratch. See, in music you only get 16 bars to paint your portrait. But in literature, you have as long as you need.

Being incarcerated has definitely been conducive aside from my muses – the reason being when I was on the streets I was serving multiple masters: the game, Lucifer and the allure. But now that I have time to go through the process of introspection, I am taking inventory. Although it is a slow process, it has paid an indispensable dividend!

The title is metaphorical because the Bay Area is symbolic for our beloved bridges, while Brooklyn shares the same reverence for its bridges also. Furthermore, a bridge’s primary function is to connect things, hence, the Bay Area’s Brooklyn BRIDGE!

M.O.I. JR: A few rappers have been turning into writers, including Goldi Loc of the East Sidaz and Celly Cel. How is writing raps similar and different from writing novels?

Chris the Fifth: Well, for me in particular, writing books and writing music is similar in that it gives me a canvas to paint the panoramic portraits of my mind. The things that are ineffable and too complicated for charades need a platform that can withstand the intricacy of the imagination.

And like I stated before, and what Rick Ross and Andre 3000 have come to conclude, sometimes SIXTEEN ain’t enough (lol). And for me that’s where literature, or should I say LITERARY ARTS, has helped me make my muses proud.

M.O.I. JR: What kind of stuff have you been reading recently?

Chris the Fifth: Well, recently I’ve been doing a lot of studying for school. I’m currently enrolled in college, working toward my AA in business. But I read a wide variety of literature, from Iyanyla Vanzant’s “Spirit of a Man” to Napolean Hill’s “Think and Grow Rich.” I like Mitch Albom, Dennis Kimbro, Na’im Akbar, Jim Marrs and countless others.

The book that I am deep into as of now is called “Blacked Out Through the Whitewash.” It’s by Suzar. I like it because it illustrates how rich our culture was until it was pilfered and plagiarized by pirates. He gives us countless reasons to be proud of being Black. And I recommend it not only to Africans but to anybody who wants the other side of the story! It’s mind blowing.

The book that I am deep into as of now is called “Blacked Out Through the Whitewash.” It’s by Suzar. I like it because it illustrates how rich our culture was until it was pilfered and plagiarized by pirates. He gives us countless reasons to be proud of being Black.

M.O.I. JR: What is your creative process like? Do you write every day? How do ideas for your novels come to you?

Chris the Fifth: That’s a good question. See, for me, my creative process never stops. Although it may seem like it is a gift, it brings with it the seed of a curse. And the reason being when you have an influx of information it clogs the conduit and causes consternation – usually resulting in a procrastination that produces nothing at all!

So because the Great Architect has blessed me with prolific capabilities, I have to gather myself from within – or run the risk of spreading myself too thin. And that’s why I keep a mnemonic notepad close in order to jot down the abundance of ideas that bombard my every moment.

But regardless of what project that I’m working on, I always try to take a day or two off so I can gather myself, you know, “Put my pimpin’ on the charger” (lol). It always helps when you can quiet the noise.

Chris the Fifth: The one that I’m working on now is a murder mystery that takes place in our very own Oakland, California. I wrote this one like a quasi-James Patterson thriller. The story revolves around the brutal murder of the patriarch of a notorious street faction. With the finger pointing to everybody from family to friends, EVERY CHARACTER in the story is a suspect. It’s best described as a mix of Terri Woods with a splash of Dan Brown.

M.O.I. JR: How did it feel to be a published author?

Chris the Fifth: Ah, man, it feels great! But like I said before, I have infinite capabilities so just as quick as it came, it went, because I know the volume of things that I have so little time to accomplish. So when I got into stores, as soon as I went to pat myself on the back I realized that a premature celebration could anger my muses because they have given me such a large load to transmute to the masses.

Don’t get me wrong, sometimes I say to myself, “CRID, YOU DID IT!” But then it hits me, “Calm down, grasshopper, YOU GOTTA LOTTA WORK TO DO. GET BUSY!” (lol)

Chris the Fifth: As of now, I’m hard at work editing “The Ventriloquist.” I just got the copyright confirmation from the Library of Congress, so we good to go. Now I just have to find somebody to do the graphics for the cover, and then I’m on to the next one.

To be honest, I would probably be on my third or fourth book by now but I don’t have the help and the resources that is required to speed the process along faster. So I have to write the book, edit the book, pay a graphic designer and anything else that is called for. Then on top of that, I gotta have commissary and the things that are required for a man in my situation.

But I will say, “God is Good!” because every time it starts to look bleak, God carries me across the river to the other side. And because of his mercy and grace, my dream is coming to fruition slowly but surely. (Can the church say Amen.)

M.O.I. JR: How can people purchase your novel?

Chris the Fifth: The novel can be purchased by simply going to Bookstore.Xlibris.com and searching “The Bay Area’s Brooklyn Bridge.” It is also available at Barnes & Noble, Amazon and any other online retailer. “The Ventriloquist” should be in stores this summer, so be on the lookout for that. Also, be on the lookout for books published in my real name, Christopher Card. They will be more conscious and grounded.

M.O.I. JR: How can people communicate or stay in tune with you artistically?

Chris the Fifth: To those who would like to reach me, my address is: Christopher Card, AK6267, CSP Solano State Prison, P.O. Box 4000, Vacaville, CA 95696. I’ll be looking forward to your correspondence. Love, live and live.

Note: ChristheFifth.com is under construction and should be up and running no later than May 2014. Tell a friend!