Benton Harbor, Mich., March 2014 – The state of Michigan forced a $2.3 million loan down the throat of the citizens of Benton Harbor. The loan will keep them in debt. If you make a loan to pay off debts, you are not getting rid of your debt. You are putting your city on the line to cover that debt and could possibly fail. This is a Quicken loan deal, where our city is put up as collateral. 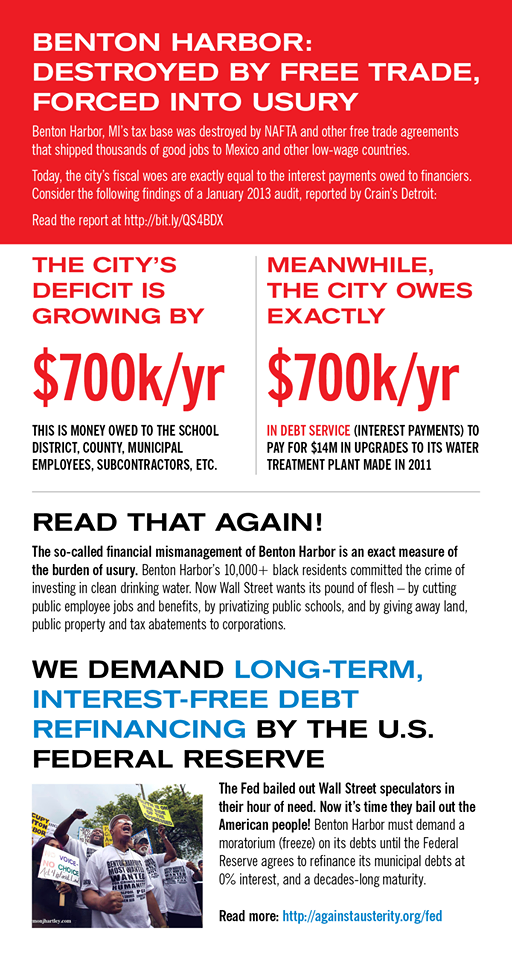 Benton Harbor has a lot of financial problems. It is one of many cities in the union that have lost their industrial tax base. Like other cities, this city continually bleeds residents while doling out financial give-a-ways to the corporations that remain, like the Whirlpool Corp. Many municipalities like Benton Harbor, due to budget cuts, have abandoned their police force and many services. This allows the county and state agencies to come in and take over.

Gov. Snyder signed an Emergency Manager bill that allows him to take over or even eliminate the locally elected officials from whole cities and school districts. Then puppets are installed to help giant corporations like Whirlpool – headquartered in Benton Harbor – to take over.

Whirlpool is like wild horses. They run you down, destroy your city or town and take your job to China or someplace else if you do not tame them. Whirlpool is unrestrained by Benton Harbor’s Mayor James Hightower, who allows the corporation to dump their costs on city residents. This is one way that Whirlpool maximizes profit for shareholders at the expense of the people of Benton Harbor.

Commissioner Marcus Muhammad told the Herald Paladium, “After four years of emergency quote-unquote ‘management,’ the city has been subjected to a loan … Debt is slavery. And a move as such only cripples the city of Benton Harbor and places us in a neo-colonial or apartheid state in relation to the state of Michigan.” He added, “It’s gravely unfortunate that the state opted to support the loan and oppose revenue by undermining the city income tax … If the city of Benton Harbor does not generate revenue, bankruptcy is inevitable.”

Commissioner Trenton Bowen told the Herald Paladium he was “also unhappy to hear the loan has been approved … The city needs to generate revenue, not take on more debt … You have an opportunity to bring in revenue and you encourage the residents to defeat it so you can go get a loan to put the city in more debt.”

Mayor James Hightower is desperate and panicking. The recall signatures for him to be removed from office are in with more than enough signatures. He is out intimidating the citizens to force them to lie. Is this the type of mayor you want? We must say enough is enough.

This story first appeared in the People’s Tribune.

Rev. Pinkney is facing election fraud charges less than two weeks before the recall election for the mayor of Benton Harbor. 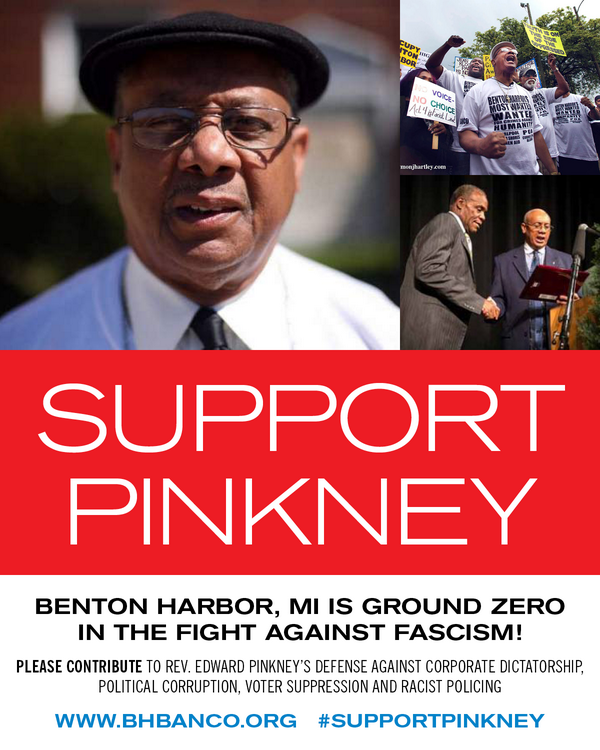 Also, they claimed that four people signed two different petitions twice. The law is clear on that. A person who knowingly signed a recall petition more than once or signed a name other than his own is violating the provisions of Michigan election law.

Pinkney never allowed anyone to sign the petition twice. This is another attempt to silence Pinkney. He can no longer use his computer. He’s under house arrest, tethered 24/7. He cannot leave his house for any reason. They are trying to silence him completely. Please spread the word.

Rev. Pinkney could face another five years as a political prisoner for his valiant efforts to recall Benton Harbor mayor and corporate stooge, James Hightower.

Pinkney is a true leader for working and poor people, embroiled in a critical moment for the defense of American democracy. Please visit http://bhbanco.org/ and contribute what you can to Rev. Pinkney’s legal defense. He would like 1,000 people to call the courthouse and ask for Michael Sepic, chief prosecutor: 269-983-7111. Free Pinkney!

Get on Twitter and Facebook, call in to radio shows, write letters to newspapers, call your representatives, and don’t let corporate welfare queens and their hired thugs back down the citizens of Benton Harbor!

We want jobs, not dictators! And we demand our rights to freedom of speech, assembly and political representation!

Voter suppression in Benton Harbor, a terrorist attack on the people

April 20, 2014 – Benton Harbor reminds me of Mississippi in the late 1950s and early 1960s. I have never been one to rave about how much progress my generation has made, but I had hoped to see an end to these horrors in my lifetime.

All citizens have the civil right to recall an elected official or initiate a referendum by way of petition. This is our only outlet.

Voter intimidation is any concerted effort or practice by an individual or group on behalf of a party or candidate to coerce the voting behavior of a particular class or race.

Berrien County sheriffs are intimidating, harassing and using Gestapo tactics to infringe on the civil rights of citizens of Benton Harbor. These actions are federal crimes.

The recall was legally sufficient in that it alerted signers that we were recalling Benton Harbor’s corrupt Mayor James Hightower.

Mayor James Hightower, in a desperation move, called in his buddies, prosecutor Mike Sepic and Sheriff Bailey. They have been lying to residents, using a dummy recall petition and the original recall petition to throw the recall signer off or confuse them. This is just one of the Gestapo tactics they are using. This investigation has lasted three months – over a recall petition.

All citizens have the civil right to recall an elected official or initiate a referendum by way of petition. This is our only outlet.

I am thinking about asking Russian President Putin to come and solve some of the problems in Benton Harbor, Michigan.

Contact Rev. Edward Pinkney at 269-925-0001, visit http://bhbanco.org/ – donate if you can – and listen to the Pinkney to Pinkney Show on blogtalkradio.com/rev-pinkney every Sunday 5 p.m. ET.