The City of San Francisco appears to be launching a discriminatory retaliatory eviction targeting its Treasure Island toxin whistleblower, Kathryn Lundgren, and her family.

Lundgren, mother of three teens, has repeatedly sounded the alarm outing the City and the Navy for collusion in neglecting to warn her and her unsuspecting neighbors that Treasure Island is a radioactive dumpsite saturated with chemicals, toxic mold, asbestos and lead. Now, after some of the 2,000-plus islanders and their 500 children have developed asthma, cancers and a host of other ailments, the City’s Mayor Ed Lee, who appoints the board members of the Treasure Island Development Authority (TIDA), apparently wants to be rid of a courageous voice.

Kathryn Lundgren is a 10-year Bayside Drive resident. Between her joyous 1995 move-in date and 2011, this mom and her neighbors developed a close-knit, loving community, threw backyard barbecues, Halloween and Christmas parties, and generally enjoyed life and each other. Kathryn became a community leader involved in island TIDA programs and other volunteer organizations as far back as 2007. Kathryn worked collaboratively and cooperatively with all of these agencies until 2013 when research revealed the truth and she began pointedly questioning those responsible.

In 2011, a shadow fell over the community. When the elementary school closed, Kathryn home-schooled her three children. In August 2011, the nearby Boys and Girls Club shuttered after a report that kids there may have breathed radioactive dust. Then, her 13-year-old daughter, Praise, was diagnosed with ovarian cysts and systemic lupus erythematosus, suffering intolerable leg-swelling. She and her brother, Mason, 17, developed intermittent painful, burning rashes, trouble breathing and asthma-like symptoms.

Their sister, Quinn, 16, began experiencing similar symptoms, difficulty breathing, chronic congestion, headaches and panic attacks also suspected to be triggered by dust and mold. In the last few months, Quinn has also been diagnosed with hyperthyroidism.

Many of these diseases surfaced among the peoples of the Bikini Atoll where, in the 1950s, the Navy researched nuclear power by exploding above-0cean atomic and deep sea hydrogen bombs.

Fully informing herself on radiation science, she became an activist and speaker. “You wouldn’t recognize me. I’ve completely changed,” she said.

In many community meetings, she has re-directed the attention of Navy and TIDA officials, and the community, to the fact of the toxins and the Navy’s rather lackluster efforts to remove them.

“I’m from a military family,” she told me. “I couldn’t imagine the Navy concealing this information from us.”

She created a Health Network for past military families and current residents. She has conducted Toxic Tours around the island, showing visible evidence of the presence of at least 14 radioactive elements, a minimum of 26 chemical contaminants, and asbestos, lead, and mold that create clear and present health risks for Treasure Island residents.

Most of all, Kathryn has caused the mighty to tremble by speaking eloquently to all available media in San Francisco, the Bay Area and beyond, showing them her samples of asbestos and mold-covered siding gathered from across Treasure Island green spaces. International media has attempted to contact Kathryn.

Lundgren has been sought out by press about this massive betrayal – most recently by Marisa Lagos for three San Francisco Chronicle articles, multiple investigative reports by Ashley Bates for the East Bay Express, NBCs Vicki Nguyen, Matt Smith and Katharine Mieszkowski of the Center For Investigative Reporting, San Francisco Magazine’s Chris Colin, in addition to seven on-the-ground reports by Carol Harvey in the San Francisco Bay View.

In 1997, the Navy decommissioned the island, planning to turn it over to the City after it “cleaned up” what it called harmless levels of radioactive and chemical residue it dumped when the island was used as a nuclear training base, saturating soil, water and housing.

Treasure Island Director of Operations Mirian Saez put bluntly TIDA’s relationship with the City and its mayor. Saez was overheard remarking she didn’t understand why an islander earlier launched grievances against her when City Hall backed her. Following a fall 2012 TIDA board meeting, she told three residents wryly at a Health Network protest: “I can’t wait to write my book. I’m going to call it, ‘How the Government Made Me Lie.’”

Functioning as placeholders, the gullible but grateful residents would secure the existing infrastructure while paying millions in rent. Addressing market rate interests, The John Stewart Co. was enlisted to intrigue and entice median income residents with amenities such as parks and open space, affordable rents and – at the time the of Lundgren’s move-in – conveniently situated schools.

TIDA, i.e. the City, promised that an upstanding resident lasting out the redevelopment period, within seven to 10 years would realize a utopian dream of affordable permanent residency in new buildings which could be handed down to their children. The Lundgrens and her neighbors feel they created their dream of a home and a future in their close community based on TIDA’s lies of omission, its neglect in disclosing the presence of mold in their walls and benzines, DDT, dioxin and radioactive material below their green grass.

The City of San Francisco appears to be launching a discriminatory retaliatory eviction targeting its Treasure Island toxin whistleblower, Kathryn Lundgren, and her family.

As it turned out, behind closed doors, a sub rosa plan laid down when TIDA was formed seems to have been maturing. The City could rake in billions more in rent by redeveloping the island and replacing the temporary market rate, poor and people of color with wealthier tenants in a high-end eco-village. It was a win-win for TIDA, a lose-lose for Treasure Islanders. This close-knit small community of low-income people, amazed at their luck and in love with their beautiful island, soon would be ripped apart.

A troublesome, inconvenient kink knotted up The Plan. In 2012, after years of Navy reassurances that radiation and chemical levels were too low to harm anyone, a state watchdog agency, California Department of Public Health, issued a series of notifications indicating that Navy contractors were “remediating” toxins based on an inaccurate 2006 report entitled “Final Treasure Island Naval Station Historical Radiological Assessment.” In 2009, CDPH strongly recommended the Navy trash the erroneous report, widen and deepen their on-site investigations, extracting data to create a new, improved HRA. Navy testing that followed, indeed, unearthed far higher radiation and chemical levels than previously detected.

In addition, both Treasure Island firefighters and islanders have complained publicly about asbestos in roof tiles, inside walls and under old tile which could cause the painful and terminal lung disease, asbestosis, water flowing through ancient pipes potentially bearing lead and heavy metals into showers and drinking glasses, and years of asthma-producing toxic mold build-up inside poorly-maintained wall space. TIDA personnel stated that redeveloping the island would solve these problems. By that time, however, several gall bladder removals, a series of childhood asthmas, and multiple puzzling illnesses and deaths would have occurred, and the impoverished tenants replaced by condo-owners.

As a result of the California Department of Public Health reports, community pressure, and the Navy’s and TIDA’s mutual need to quell mounting tension and increased awareness of Treasure Island’s high toxicity, on April 9, 2014, TIDA and the Navy met at the Casa de la Vista, One Avenue of the Palms, and rolled out their new plan to conduct radiological surveys of Treasure Island homes. This move raised the worrisome, as yet unanswered question: Would island residents be forced to leave?

A week later, Tuesday, April 15, 2014, the Navy held a meeting in which it presented its survey plans. During that meeting, Base Realignment and Closure Environmental Coordinator Keith Forman stated that, beginning in June 2014, the elements contracting remediators discovered during interior home surveys and beneath homes with boring devices will determine next steps – thus, leaving island tenants’ futures vulnerable to uncertain winds.

Prior to the Navy’s survey announcement, Kathryn was desperate to find a way to remove her children to a safe place. She especially wanted to provide her daughter Praise the opportunity to recover from possible mold, chemical and radiation-related illnesses by taking her out of the environment producing these ill effects.

Clearing the way for the Navy to complete radiological and soil gas surveys and remediate the mold in and beneath her house, TIDA must relocate her family. To date, TIDA has provided no place they can go.

Constant harassment has followed. Villages Property Managers resisted Kathryn’s attempts to arrange for temporary accommodations, saying the hotel claimed no vacancies. Hotel personnel emails disclosed there were, indeed, rooms available and that hotel staff had not spoken with John Stewart agents at that time.

Kathryn detailed in writing arrangements necessary to accommodate her family: housing with identical square footage, temporary, safe, secure, toxin-free and within the City and County of San Francisco, where her husband works, their children attend school, and medical care is easily accessible. Kathryn was adamant: “I need accommodations that are not more stressful for my family.”

The agent bypassed her request for his signature, offering quarters at half the size and twice the cost.

His return email pressured her to respond by a swiftly-approaching deadline.

At one point, this City front man levied a preposterous but telling threat: removal by “eminent domain” in which a government entity takes private property for public use. This bullying move exposes the City’s direct involvement in harassing the Lundgrens.

“Moving is traumatic. It’s interfering with my children’s life events they should enjoy, especially this weekend.”

“After waiting 18 years, we’re forced to celebrate this moment, without the certainty of a permanent home or our health.

“Mason will graduate from a hotel instead of his childhood home.” He leaves for football training and college worried about his family’s illnesses and future.

During the 30-day remediation period, Kathryn must live in a hotel and locate a new residence without “my home phone number.”

When the agent complained Kathryn was not cooperating, she corrected his misrepresentation: “Early on, They – the City, TIDA and John Stewart – deliberately decided to move people into substandard housing.

“We should not be punished or take on the extra burden of blame for a situation they created and especially not be retaliated against for speaking out about it.”

The City used the promise of parks and an elementary school to market the housing to families like Kathryn’s with children, who are the most vulnerable population. “Then when we discover they’re poisoning us, the City blames the families.”

When a CDPH employee attributed the problems to “people on crack” while scanning her backyard with a Geiger counter, she threw him out of her yard. “When renters identify toxins and insist they be removed, you treat them like criminals!” Twenty minutes after his comment, an extremely hot item was located and removed across the street from her building.

Had the Lundgrens known about the toxins 10 years ago, they could have invested their $250,000 rent into a home.

“Additionally,” Kathryn pointed out, “We invested our time and energy into this community which my children consider their family. Leaving people they love is heart-wrenching.”

Through tears she asked, “Do they take that into consideration?”

“We should not be punished or take on the extra burden of blame for a situation they created and especially not be retaliated against for speaking out about it.”

Kathryn wondered aloud if Ed Lee read her Treasure Island Health Network Facebook post in which she challenged him to go with her on a toxic tour of island hot spots. “They do monitor our page,” she said. 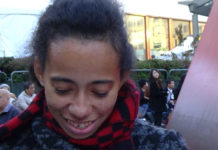