Like all residents on Treasure Island, a man-made landform drenched in water, heat and humidity, wherever Damian Ochoa moves in John Stewarts’ market rate “Villages,” mold spores float stealthily in the air behind him.

Three years ago these spores “mushroomed” into spotty patches in Damian’s immaculate home. In early spring 2010, he noticed a mold-mildew cluster in the master bedroom. He read about Brittany Murphy dying from breathing mold. Would this mold put him and his partner, Mod, at risk of dying?

“We sleep in that room. What was that going to do to our respiratory systems?”

During interviews at the Treasure Island Bar and Grill and Chinook Court, where he lives, Damian transfixed me with his articulations on multicolored molds.

“It was black mold. It was green mold. It was white mold. There were many different colorations of it. It was toxic. It was unhealthy. It smelled musty, like in a basement.”

The diminutive, persistent fungus germinated under Damian’s bed, spread along floor boards, dug into the rug, crawled up walls into the dark back of his closet, materialized on clothes and belts.

His John Stewart Co. property manager, Dan Stone, called in a mold remediation specialist who took air samples. “They acknowledged there was an issue.”

After removing part of a wall and attempting cleanup, “they decided it was a huge inconvenience they weren’t able to deal with.”

Licensed contractor, Stone, “resolved” the toxic mold problem by giving up on cleaning, reimbursing Damian for damaged property, and relocating him.

On Oct. 1, 2010, The Villages transferred Damian to a unit directly across from his old apartment on Chinook Court, one of Treasure Island’s “fish streets.”

But alas! Pesky mold spores continued to swarm Damian. During the first year in his new home, gray, black and white fungal masses insinuated themselves onto any item – jewelry, rings, picture frames – placed near Damian’s mold-encrusted sills. Gray-green molds bred in dark closet crevices on multiple pairs of expensive shoes he was forced to trash.

Contending in the epic wrestling match for worst Treasure Island toxin against radioactive material and the colossal chemical contamination, the island’s “mold monster” may have won the battle in epidemic proportions. Residents widely report respiratory problems and asthma from living in mold-saturated structures.

On March 7, 2014, media announced that mold forced fire fighters from their old Firehouse 38 to the Fire Training Station four blocks away.

Kathryn Lundgren’s labored breathing prevented her bike treks to the store. In May, this powerful fungi bully finally drove her and her sick kids, coughing and short of breath, off the island.

Barring the creepy mold symptoms and diseases detailed below, this “fun-fungi” can be called our friend. That portobello mushroom on your pizza is considered a delicacy. The fine cabernet you’re sipping is crafted with yeast. The lifesaving antibiotic, penicillin, is made from mold.

Mold’s job description is to ooze enzymes that decay carbon life forms – like trees and plants – into soil so we can grow more food.

Those spots on your window can be as lethal to you as the radioactivity and chemical contaminants found Treasure Island-wide and in every San Francisco home. Health or life-threatening black or toxic mold fungi, in 16-plus varieties, attacks the lungs by releasing tiny spores and particles you inhale when you breathe.

Mold’s life cycle is absolutely sci-fi. Little threads called hyphae release enzymes that break down and suck food from organic carbon-based materials like wood, cellulose and even human skin. Having fed, the hyphae turn into a mycelium, the black mass you see on your windowsill or in your shower.

With the right amount of light, oxygen, moisture, food and warmth, the ends of those hyphae filaments grow spores. Spores are one-celled reproductive spheres that clone themselves and can live in dry conditions for years. The highly resistant, durable spores float in air, light on another surface, spin out new hyphae and start feeding, germinating and growing all over again.

Mold, mildew and yeast are common in workplace and household dust. Building occupants are exposed when mold is allowed to grow in moist, warm, dark crevices on windowsills, in bathrooms, water pipes and basements.

All of us are vulnerable to mold, but especially people sensitive to respiratory infections and those with allergies or immature or weakened immune systems like children or the elderly. When vulnerable people breathe in spores from certain species, mold can implant and grow inside the human body. Live mold can grab hold in the respiratory tract or lungs, release toxins or the bacteria that molds feed on, and cause respiratory infection, lung inflammation or even pneumonia.

If mold triggers an allergic reaction, you will sneeze. Your nose will run. Your eyes will water and itch.

Sufficient amounts of toxic molds produce mycotoxins that can cause nausea, vomiting, nose and lung bleeding and neurological problems. These mold poisons can produce serious reactions like chest tightness, heart palpitations and pulmonary fibrosis, in which inflamed lung air sacs are gradually replaced by scar tissue. Lung scars cause labored breathing. This strains the heart, leading to right-sided heart failure.

A practicing Catholic, at 18, Damian felt a calling to become a priest. “After much thought and mulling,” he decided not to go into the church. He would do God’s work on the outside. “Jesus was a social worker. So that’s what I’ve committed my life to doing. In the fall, it’s going to be 20 years.”

During his time in San Francisco, Damian has had clients as young as 5 and as old as 101. He has worked with a wide range of marginalized and oppressed populations, homeless people, youth, families, people living with HIV AIDS, people grieving loss, domestic violence survivors, the severely and persistently mentally ill, people abusing substances and the criminal justice population. He worked with such widely divergent groups as sex offenders and, as service coordinator of a rape crisis center, rape victims.

But, he told me earnestly, “It’s not about: Oh, I have … alphabet soup behind my name.” It’s his education and training, but also, as “a person of color and being gay,” he knows how to empathize as an active listener.

“More than anything, people just want to be heard,” he told me. “They want to be encouraged … validated. It’s pretty simple what people want.

“if people would just take time to stop judging one another and be present and listen, that would go a very long way.”

Damian’s commitment to social justice makes him determined to obtain fair treatment to keep himself and others healthy by solving – or at least keeping at bay – the island’s ever-present toxic mold problem.

When the dot com bubble burst, Damian’s partner, Mod, lost his $100,000 a year gig. “We started looking to move from Bernal Heights where we were paying, like, $2,400 for rent. We came across The Villages at Treasure Island,” into whose low-cost market rate housing they moved on Dec. 1, 2009.

“Once we got situated … I realized that John Stewart was the property management company. That alarmed me. I had done previous work with them with Connard House with the Care Not Cash hotels that Gavin Newsom started in the City … and there were numerous problems.

“I don’t believe they involve themselves with non-profits because they want to give back to the community or help marginalized and oppressed populations. I think that they strictly do it because it is guaranteed revenue that’s going to come in for them.”

Damian noticed people moving into his old apartment at least a year and a half after he moved out. When he was discussing his current mold issue with Stone, Damian inquired about how the mold was eradicated in his old unit. Stone stated, “They’re pretty detailed people, and they haven’t filed any complaint about mold or mildew in that unit.” Stone never offered any report or details of how or if the old unit’s mold was eradicated.

I asked Damian whether it could it take that much time for mold to develop.

Said Damian, “What I know is that they just aired that place out, didn’t let somebody live in there for over a year and a half, and painted over everything.”

“Absolutely,” replied Damian. “I don’t think they did anything to eradicate that issue, and these people probably just don’t know about it yet.”

As we walked the island to view his home, Damian coughed, wondering why this constant hacking comes with congestion, headaches, fatigue and night sweats.

Damian has always had baseline good health. He is not HIV positive, overweight or morbidly obese. His immune system’s not compromised. He’s a nonsmoker. “So, where’s this coming from?” he asks.

Damian hasn’t focused on radiation as a cause of Island illness partly because he believes, like many, the government and the military are bureaucracies you cannot sue.

Damian sighed, “They will lie and twist, and, by the time we’re almost dead, then they’ll say, ‘Oh, yeah! Guess what, all those people living out on TI. Yeah, there was radiation and all these carcinogens out there. But oh well!’”

Despite this, Damian truly believes his health has been impacted, not by radiation, but by mold. He’s certain his mold is the toxic variety.

“I’ve been more susceptible to colds and coughs and just overall not feeling well – feeling sluggish and like there’s something wrong, but I like can’t pinpoint it.

“I have gotten more sick, and I’ve called in sick to work more days than I ever have since I’ve moved out here to this island,” not for a little congestion but because “I can’t do my job because I don’t feel well.”

That gravelly sound in your throat’s probably not normal for you, I said. Sexy, but unsettling. He agreed.

Do you think this was coming on for a while – maybe even started back in the first unit? So now you obviously have had long term health effects building?

“Absolutely,” he said. The first unit was the most toxic. Mold was everywhere – walls, bed, bed board, windows, carpet.

In December 2013, five months before his eight-day April 2014 vacation, he had to be prescribed an inhaler for bronchitis, which he had never had before.

On April 24, he returned from vacation. Within 24 hours, he developed a cold and a cough. On May 3, 10 days later, the symptoms persisted.

Sometimes he blows his nose in the morning. So does Mod, his partner. Before moving to the Island, he did not notice that.

I pointed out the island’s widespread mold problem. Yes, agreed Damian, the spores are stirred up and passed around in the wind. I wondered whether this critical mass of island residents with breathing problems could force TIDA to tackle the culprit or provide redress.

What are your expectations around compensation for your health issues?

“This isn’t my first rodeo,” he said. “I’ve been around long enough that (I know) JSCO, TIDA, whoever else (will) deny! deny! deny! (You must) “prove that it’s a direct link, that your being exposed to mold has caused you to have bronchitis, has caused you to wheeze, (or) they will not take any action.”

“I already know they will not take any action nor make me whole again. So, I’m not expecting anything from them,” he said. 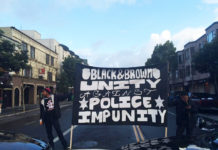