On July 29, Congressional Progressive Caucus Co-Chair Keith Ellison did something unique for a member of Congress. He published an op-ed in the Washington Post calling for ending the economic blockade on 1.8 million Palestinians in Gaza, noting that most of the victims of the blockade were women and children.

As of this writing, Rep. Ellison stands alone among Members of Congress in calling for the economic blockade on civilians in Gaza to end. (See update below.)

“Every schoolboy knows” that the so-called “pro-Israel lobby,” i.e. the lobby pushing for U.S. policy on any issue of interest to the Israeli government to be determined to the greatest extent possible by the Israeli Likud party, has tremendous influence in Washington and especially in Congress. The generally accepted shorthand for this pro-Likud lobby is “AIPAC.” (It’s common practice to use the term “AIPAC” to refer to the pro-Likud lobby generically, including such groups as the (so-called) Anti-Defamation League [ADL] and the American Jewish Committee [AJC], rather than merely to the activities of the American Israel Public Affairs Committee per se, much as one uses the term “xerox” to mean “copy.” I will follow this practice here, using the term “AIPAC” to refer to the pro-Likud lobby more generally.)

But here is a crucial fact that is largely unacknowledged: Until now, there is no consistent, strategic, coordinated effort by D.C.-focused reformists to reduce the harm caused by AIPAC to U.S. policy on the Israel-Palestine issue, with the goal of opening political space for concrete measures to support a realistic diplomatic resolution of issues related to the Israel-Palestine conflict, similar to the coordinated efforts that have opened political space for diplomatic efforts to resolve the U.S.-Iran conflict over Iran’s nuclear program. There is a vacuum of pragmatic, reformist leadership to try to limit AIPAC’s destructive influence on U.S. policy towards Israel-Palestine.

If there were not such a vacuum, Keith Ellison would not be standing alone.

Congressional Progressive Caucus Co-Chair Keith Ellison did something unique for a member of Congress. He published an op-ed in the Washington Post calling for ending the economic blockade on 1.8 million Palestinians in Gaza.

On the one hand, there are reformist groups. Unfortunately, at this juncture, the historic fulcrum of these groups appears to be too obsessed with getting the approval of pro-AIPAC Jewish communal institutions to be relied on to consistently lead a reformist effort that moves the ball forward in Washington on Israel-Palestine. On the other hand, there are non-reformist groups on the left which are incapable of leading strategically because they are obsessed with quixotic fantasies of cutting U.S. military aid to Israel or of opposing AIPAC “yay Israel” resolutions that are unstoppable.

Quixotic efforts are counterproductive over the long term to engagement and mobilization. If you mobilize people for a quixotic strategy, they’re likely to be discouraged when the strategy predictably goes down in flames. They’re likely to conclude that engagement is useless, but it was the pursuit of a quixotic strategy that caused their demoralization, not engagement per se. When people win, they do more. When they lose, they do less. It’s a moral responsibility of a strategist to try to create opportunities for people to win.

Pushing to end the economic blockade of 1.8 million Palestinian human beings in Gaza is passing the “one member of Congress” test, because Congressional Progressive Caucus Co-Chair Keith Ellison is in the house. So here’s a strategy that could potentially be on the playing field of Washington right now: Let’s try to get other Members of Congress to #StandWithKeith in favor of ending the economic blockade on 1.8 million Palestinians in Gaza.

We have to start somewhere. Where should we begin?

Twenty-seven members of the House have two things in common:

Why is this group of 27 members of Congress so special?

Here they are, with their districts and some geography:

Roughly 6 percent of Americans are represented by one of these 27 members of the House. If you belong to this 6 percent, then you are special, because they are special.

If you a member of this 6 percent group of special Americans, then I encourage you to call your representative – you can look up their phone number here – and urge them to make a public statement now in favor of lifting the blockade on 1.8 million human beings in Gaza. Time is pressing, because negotiations are happening in Cairo right now that are likely to have a decisive impact on whether and when the blockade is ended.

If you belong to the other 94 percent, then I encourage you to look at the list of 27 districts above and send the link to this post to someone you know who lives in one of those 27 districts.

Let’s form an ad-hoc “pressure group” to try to turn the CBC in favor of ending the economic blockade of 1.8 million Palestinians in Gaza. If we succeed, yay for us. If we fail, we won’t fail because we chose a quixotic strategy; we’ll fail because we couldn’t recruit enough pragmatic engagers to carry it out.

On Aug. 6, Rep. Barbara Lee sent a statement to KPFA saying, “I have called and will continue to call for a sustained cease fire to address the ongoing humanitarian crisis, end the blockade of Gaza, and stop the loss of civilian lives.” Listen here at the 10:27 mark.

And read what she said, with Ellison, in 2010: “Black Caucus members want Gaza blockade lifted in light of flotilla incident.”

Robert Naiman is policy director at Just Foreign Policy and can be reached at info@justforeignpolicy.org. He also writes on U.S. foreign policy at Huffington Post, is president of the board of Truthout and is on the steering committee of Gaza’s Ark, a project to bring a boat out of Gaza filled with Palestinian exports in defiance of the blockade. This story was posted to his blog on Daily Kos. 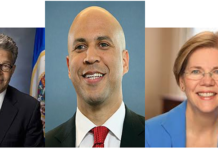 Lies, deception and betrayal sparked the war against Libya

The facts: How Israel orchestrated the real Geneva ‘hate fest’ against Black and Brown people