New York – Advocates of the Reunite Haitian-American Families Campaign have achieved a significant victory in the Oct. 17 Department of Homeland Security announcement of a Haitian Family Reunification Parole Program (HFRPP). Prior to this federal announcement, longstanding support for FRPP grew from key national efforts like the Reunite Haitian American Families Campaign that is sponsored by the national coalition Black Immigration Network, which includes such organizations as the Black Alliance for Just Immigration (BAJI), Haitian Women for Haitian Refugees and Haitian Women of Miami.

Co-chair of the Reunite Haitian-American Families Campaign and executive director of BAJI, Opal Tometi, explains: “Immigrant rights organizations launched the campaign as the domestic and international Haitian community dealt with the powerful earthquake that shook the Haitian capital of Port au Prince. Living conditions began to worsen as communities displaced to tents began to number into the hundreds of thousands. This fragile situation degraded further with the onset of a cholera outbreak from unscreened U.N. troops.”

While Haitian visa recipients stayed on waiting lists, some for over a decade, a call went out for a Family Reunification Parole program that would expedite family reunification by allowing already approved visa recipients legal entrance into the U.S. to reunite  with their family members.

The Department of Homeland Security has responded to the demands of immigrant groups and the Reunite Haitian American Families campaign. Members of this campaign believe this is an important step for recipients whose visas are within two years of being current.

Analysts have shown that nearly 110,000 Haitians have been on the waiting list for up to 12 years. Depending on the implementation approach and the way the program is structured, it is currently estimated to cover only 5,000 individuals who cannot file immediately.

BAJI Executive Director Opal Tometi observes: “It is clear that we are being heard, but it is important that we understand that this is just one step in our journey to get the needs of the Haitian-American community met. We will watch the Department of Homeland Security closely to see how they plan on implementing this program and call on them to proceed with a strategy to expedite the process for all Haitians who’ve already been approved.”

BAJI Executive Director Opal Tometi observes: “It is clear that we are being heard, but it is important that we understand that this is just one step in our journey to get the needs of the Haitian-American community met.”

Advocates for the Haitian FRPP call for a broader program with the Cuban parole program as a model. Support for a broad and comprehensive FRPP is resonating in a Haitian community that by 2009 reached 830,000 members across the country.

Marliene Bastien, executive director of Fanm Ayisyen Nan Miyami/Haitian Women of Miami and co-chair of the Reunite Haitian-American Families Campaign, told the Miami Herald, “We will continue to work for the rest of the group who are qualified to get them the opportunity to be reunited with their family members because they have been waiting for so long.” 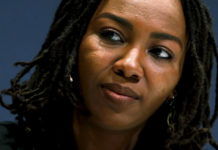