The Dallas 6 trial, begun Nov. 10, is back in session at least through Nov. 20 at Luzerne County Courthouse; transportation is available to and from Philadelphia and Pittsburgh – email sd4hrc@gmail.com. Two stories follow.

The Dallas 6 go to court

They are called the Dallas 6 – and we ain’t talking about Texas.

Dallas, in Pennsylvania, is one of nearly 30 prisons in the state, located in its rural outback. The six are young Black men who, in 2010, tried to stage a peaceful protest in the prison’s “hole,” its solitary confinement unit. 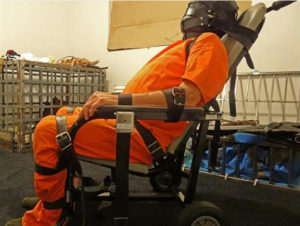 They were moved to such protest after witnessing another prisoner, Isaac Sanchez, being strapped into a torture chair (prison officials call it a “restraint chair”) for hours – even overnight. When guards threatened to do the same to them, the men tried to cover their cell doors with their bedding – and refused to leave their cell, in an effort to protect themselves.

The guards armed themselves with batons and electrified equipment, and they stormed the six cells, leaving the men beaten, bloody, naked, eyes burning, their flesh seared with pepper spray.

All of the guards later admitted they suffered no injuries. How could they? They wore black body armor and helmets – what prisoners call “star wars” garb.

After some of the men filed grievances and civil suits, the DA replied with criminal charges, and on Nov. 10, 2014, the men were marched into Luzerne County Courthouse, in Wilkes-Barre, Penn., to face “riot” charges.

They were gassed, they were beaten, they were tasered and zapped with electro-shields – and they face riot charges!

It should be noted that this is the same county where judges took money to send kids to jail, where no one reported their monstrous actions – not even the DA! – for nearly a decade!

The Dallas 6 – Andre Jacobs, Anthony Kelley, Carrington Keys, Anthony Locke, Dwayne Peters and Derrick Stanley – are potentially facing more prison time for refusing to submit to torture, for men have died, in America, while strapped into the torture chair.

Should they have meekly submitted to torture – like sheep to the slaughter?

For more information on the Dallas 6, go to scidallas6.blogspot.com.

Help the Dallas 6 stand for justice and human rights!

The case of the Dallas 6: Torture and retaliation against prisoner whistleblowers

Imagine sitting in a windowless 6-foot-by-9-foot room the size of a bathroom for 23 hours a day, unable to communicate with family or anyone on the outside. The lights are on 24/7. The only drinking water you have is brown from rust. You constantly hear mentally ill people screaming and harming themselves.

This is solitary confinement in a state prison near you. The United States has many like the one in Dallas, Pennsylvania, a modern day dungeon, which imprisons people for years to face abuse and violence out of public view by guards paid with our tax dollars. But men inside also defend themselves and, even locked within their cells, try to fight back. One of those men was my son Carrington Keys.

The United States has many like the one in Dallas, Pennsylvania, a modern day dungeon, which imprisons people for years to face abuse and violence out of public view by guards paid with our tax dollars. 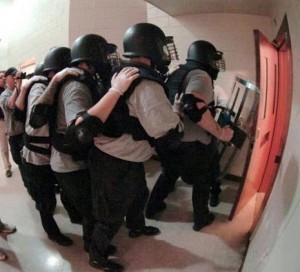 The men went through all the complaint channels. Carrington wrote to then District Attorney Jackie Musto Carroll informing her of the abuses and asking for help. She never replied. He filed a lawsuit against her for turning a blind eye. He informed the family of the man coerced into suicide and they sued and won an undisclosed sum.

HRC compiled the abuse logs into the Institutionalized Cruelty report. But instead of ceasing, the abuse escalated. On April 29, 2010, after young Isaac Sanchez was bound, naked and bloody, to a restraint chair for at least 16 hours (two hours is the legal limit), the men peacefully covered their cell windows to ask for outside intervention.

Covering a cell window is a signal in Pennsylvania prisons to summon a captain, who is required to come down, so that the prisoner can make complaints directly to him about a guard or circumstance that they have exhausted all other means to resolve. Instead, guards in riot gear pepper-sprayed, tasered and beat the unarmed men.

The six were originally charged with refusing to obey an order, a misconduct charge handled within prison. Four months later, however, after the assaults became public when HRC filed a criminal complaint against the Department of Corrections (DOC), Luzerne County District Attorney’s Office, the DOC and the state police conspired to charge these men with riot, a felony.

Although former Luzerne County judges Mark Ciavarella Jr. and Michael Conahan now sit in prison for incarcerating youth for kickbacks (the “kids for cash” scandal), the corruption that enabled their outrageous crimes continues to flourish, as demonstrated by this malicious frame-up and cover-up.

Covering a cell window is a signal in Pennsylvania prisons to summon a captain, who is required to come down, so that the prisoner can make complaints directly to him about a guard or circumstance that they have exhausted all other means to resolve.

A common wish of prisoners is to be treated like human beings. They expect to do their time and come out. While guards are not expected to be courteous or sociable, they are expected not to harass, threaten, shout racial slurs, provoke suicide or retaliate because you use your right to complain about their lack of professionalism and ethics.

Whatever a person’s sentence, it does not include torture, abuse or murder. The law should be upheld. The guards and those covering up for them should be on trial, not the Dallas 6.

A common wish of prisoners is to be treated like human beings.

The Dallas 6 are part of a movement of prisoners, such as the California and Georgia prisoner hunger and work strikers, who use peaceful resistance to counter rampant abuses in solitary, crossing racial divides and ending hostilities among themselves to do so.

The Dallas 6 trial started Nov. 10, is scheduled to continue Nov. 17-20 and may resume in February. This is a landmark case for all who believe in justice, anti-racism and human rights. The public needs to know, and the decent guards need to be supported rather than letting their brutish colleagues dominate the DOC with their illegal sadism in prisons and courtrooms. We demand accountability.

Shandre Delaney, coordinator of the Justice for the Dallas 6 Support Campaign and mother of Carrington Keys, one of the Dallas 6, has been an advocate for human and civil rights for 15 years at Human Rights Coalition and Abolitionist Law Center in Pittsburgh. She can be reached at sd4hrc@gmail.com. This story first appeared on Truthout. Visit scidallas6.blogspot.com and the Facebook page for the latest information.