These crass, opportunistic politicians in Pennsylvania were at it again this mid-term election cycle. In an attempt to curry favor from the Fraternal Order of Police (FOP) and conservative voters, Pennsylvania’s Gov. Tom Corbett, Department of Corrections Secretary John Wetzel, Philadelphia District Attorney Seth Williams and the majority of state legislators – all of whom have sworn to uphold and protect the Constitution – have removed Mumia Abu-Jamal’s right to free speech from the Pennsylvania and United States Constitutions in order to permanently gag him.

On Oct. 5, world famous commentator and political prisoner Mumia Abu-Jamal gave the commencement speech at his alma mater, Goddard College in Vermont, at the invitation of the students and with the backing of the administration. This infuriated the FOP.

The FOP immediately sought to silence Mumia by enlisting State Representative Mike Vereb to sponsor Senate Bill 508, the Revictimization Relief Act (known as the “Mumia Gag Law” by activists) which became the text of House Bill 2533. The Mumia Gag Bill was fast-tracked through the Pennsylvania General Assembly and passed on Oct. 16, 11 days after Mumia’s recorded commencement speech at Goddard College and just 19 days before mid-term elections.

On Oct. 21, in a last-ditch effort to win votes and be re-elected, Gov. Corbett, who was nicknamed “One-Term Tom,” signed the Mumia Gag Bill into law while campaigning in Philly. It was a “Hail Mary Pass” that didn’t score, as Gov. Corbett lost his re-election bid on Nov. 4, becoming Pennsylvania’s first one-term governor in nearly 50 years!

The Mumia Gag Law is an ambiguous law that allows the district attorney or state attorney general to file a civil action complaint on behalf of a victim against an inmate or former offender for injunctive or other relief, for conduct which perpetuates the continuing effect of the crime on the victim on the basis of causing a temporary or permanent state of mental anguish.

Consequently, the Mumia Gag Law is facially unconstitutional (illegal) as it blatantly violates the First Amendment right of free speech of incarcerated citizens and of corporations that facilitate their free speech. This illegal Mumia Gag Law will not go unchallenged.

Send our brother some love and light: Kerry Shakaboona Marshall, BE-7826, SCI Rockview, P.O. Box A, Bellefonte PA 16823. Brother Shakaboon is a founding memer of the Human Rihts Coalition (HRC), co-founder and editor of The Movement human rights magazine, Prison Radio correspondent and a child life prisoner in Pennsylvania. He can be reached at Shakaboona41@gmail.com. This message was recorded by Prison Radio.

Overturn Senate Bill 508: Defend the First Amendment rights of prisoners, journalists and all of us

An Indiegogo campaign is launching the Prison Radio Defense Fund to defeat Pennsylvania Senate Bill 508 – signed by Gov. Tom Corbett – which prohibits prisoners and those formerly incarcerated from speaking publicly. The law targets journalists, non-profits and individuals who aid prisoners in communicating to the outside world.

We need to raise $45,000 to keep disseminating voices of dissent on the airwaves and to wage a legal battle. So far, 68 percent of the goal has been reached. The target date is Jan. 2.

The Prison Radio Defense Fund along with the Abolitionist Law Center and the Amistad Law Project have already filed the lawsuit to block the unconstitutional law, SB508.

Prison Radio has been recording Mumia Abu-Jamal and other prisoners for over 20 years and we plan to continue doing so in spite of the threats we’ve received. Since this law was signed, we have been recording and broadcasting Mumia more than ever before. We must abolish this law so that prisoners’ voices are not silenced, and we need your support!

While this law only affects Pennsylvania, politicians there hope that other states will copy them. We can’t let that happen!

We need to raise $45,000 to keep disseminating voices of dissent on the airwaves and to wage a legal battle.

Michelle Alexander, author “The New Jim Crow,” donated to the Prison Radio Defense Fund and asks you to join her:

“Please support this effort to raise funds to overturn legislation adopted in Pennsylvania that empowers prosecutors to silence prisoners – bar them from speaking publicly in any form. This law was passed in response to Mumia delivering the commencement address at Goddard College from behind prison walls.

“But this isn’t just about Mumia. This law threatens the ability of ANY prisoner in Pennsylvania to speak to the media if a victim objects, in clear violation of free speech principles. If the law is allowed to stand, it will make it even more difficult than it already is for people in prison to have their voices heard. And you can be certain that copycat legislation will be adopted in other states whenever prisoners actually succeed in getting their message heard on the outside. This law needs to be overturned now.” 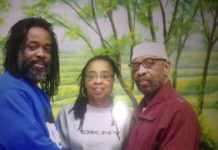