Poverty hurts children and our nation’s future. This stark statement is backed by years of scientific research, and the more we learn about the brain and its development the more devastatingly true we know this to be. Childhood poverty can and does scar children for life. Yet in the largest economy on earth, we stand by as 14.7 million languish in poverty. Here’s a snapshot of who our poor children are today: 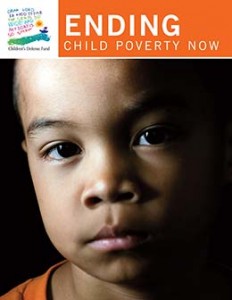 Our nearly 6.5 million extremely poor children exceeds the combined populations of Delaware, Montana, New Hampshire, Rhode Island, South Dakota, Vermont and Wyoming and is greater than the populations of Denmark or Finland.

It is a national disgrace that so many poor children live in the United States of America – the world’s richest economy. It doesn’t have to be this way. It’s costly. And it’s the greatest threat to our future national, economic and military security.

The Children’s Defense Fund has just released a groundbreaking report called Ending Child Poverty Now showing for the first time how America could end child poverty, as defined by the Supplemental Poverty measure, for 60 percent of all poor children and 72 percent of all poor Black children. We can make this happen by investing another 2 percent of the federal budget to improve existing programs and policies that increase parental employment, make work pay and ensure children’s basic needs are met.

It is a national disgrace that so many poor children live in the United States of America – the world’s richest economy. It doesn’t have to be this way.

Poverty for children under 3 and children in single parent households would drop 64 percent, and 97 percent of all poor children would experience improvements in their economic circumstances.

A companion report by the Children’s Defense Fund-California presents specific state policy recommendations for how California can reduce child poverty, including raising the state minimum wage to $15 per hour, enacting a state Earned Income Tax Credit and expanding child care for low-income children. Child poverty is a moral and economic crisis that California cannot afford to ignore.

Why, in one of the wealthiest states in the nation, do we allow a quarter of California children – and one-third of African-American and Latino children – to grow up poor? Poverty denies our children an equal opportunity to succeed in life and prevents our state from developing a thriving middle class. We must end child poverty in California – and we know how to do it!

CDF contracted with the non-partisan, independent Urban Institute to generate real numbers on the costs to implement improvements to existing policies and programs and the number of children who would benefit. CDF’s report shows how relatively modest changes in policies we know work can be combined to significantly reduce child poverty.

And those changes can be implemented right now if our political leaders put common good, common sense and economic sense for children first to improve the lives and futures of millions of children – and save taxpayers hundreds of billions of dollars each year.

We must end child poverty in California – and we know how to do it!

CDF’s report estimates a cost of $77.2 billion a year for the combined proposed policy improvements and suggests multiple tradeoffs our country can make to pay for this huge, long overdue and urgently needed reduction in child poverty without raising the federal deficit, including:

Download CDF’s new report and share it widely with your child advocacy networks and faith communities to learn changes that can be made at the national, state and local levels. Fifty years after President Lyndon Johnson declared a war on poverty, it’s time for all Americans to work together to finish the job, beginning with ending child poverty in our nation with the largest economy on earth.

Sign up for actions you can take for a real plan to end child poverty now, at http://www.childrensdefense.org/take-action/stay-informed.html.

Marian Wright Edelman is president of the Children’s Defense Fund and its Action Council whose Leave No Child Behind® mission is to ensure every child a Healthy Start, a Head Start, a Fair Start, a Safe Start and a Moral Start in life and successful passage to adulthood with the help of caring families and communities. Follow her on Twitter: www.twitter.com/ChildDefender.

Who’s making the rules? Time added to sentences for our brothers at the fire camp