The bloody arrest of University of Virginia student Martese Johnson all started when an employee for a local bar approached him on a sidewalk, Johnson’s attorney, Daniel Watkins, said in a press conference Thursday, March 19.

Watkins said his client was never in possession of a fake ID and was simply standing on the sidewalk when the bar employee walked up to him. The student’s subsequent arrest, which UVA officials have described as “brutal” and “highly unusual,” prompted Virginia Gov. Terry McAuliffe to order a state investigation Wednesday into the behavior of the Virginia Alcoholic Beverage Control agents who took Johnson into custody.

Johnson was standing near the Trinity Irish Pub around 12:30 a.m. Wednesday, Watkins said, when “an employee of the establishment approached him and asked for his license.”

Johnson is originally from Chicago, where his mother still lives. He was never in possession of a fake ID, Watkins said.

The Virginia ABC agents then forced Johnson to the ground, where they handcuffed him while “his face and skull [were] bleeding and needing surgery, all of this over two alleged offenses,” Watkins said.

Virginia ABC declined to comment further about the incident to The Huffington Post on Thursday. Trinity Irish Pub told HuffPost it had no comment. Watkins declined to take questions Thursday.

“I’m shocked that my face was slammed into the brick pavement just across the street from where I go to school,” Johnson said in a statement, read by Watkins. As Johnson was on the ground, he added, “One thought raced through my mind: How could this happen? I still believe in our community. I know this community will support me during this time.”

UVA students marched on campus Wednesday night and Thursday in protest of what they believe was excessive force used by Virginia ABC agents. Johnson has asked for activists to remain civil in their protests.

Former White House correspondent for Politico Joseph Williams reported for Takepart.com that the “attack against Johnson, a third-year student and member of the University of Virginia’s Honor Council, exposed long-standing racial tensions at arguably one of the country’s most prestigious universities. It also seemed to confirm what African American men have asserted for years: that racial profiling can happen to them just as easily on an affluent, predominantly white college campus as it does in hardscrabble Black neighborhoods.

“Johnson, who reportedly suffered head wounds that needed nearly a dozen stitches to close, was charged with resisting arrest, obstruction of justice, and drunk and disorderly conduct, yet he wasn’t charged for allegedly using counterfeit identification, according to local news reports. He was released on $1,500 bail the morning after his arrest.

“The incident happened just before 1 a.m. outside Trinity Irish Pub, a bar on the edge of Virginia’s Charlottesville campus. …

“’Martese was talking to the bouncer, and there was some discrepancy about his ID,’ student Bryan Beaubrun told the campus paper. ‘[An] ABC officer approaches Martese and grabs him by the elbow…and pulls him to the side.’

“Moments later, officers from both the Charlottesville and University of Virginia police departments arrived on the scene, and things quickly escalated, Beaubrun told the paper.

“’It happened so quickly. Out of nowhere I saw the two officers wrestling Martese to the ground. I was shocked that it escalated that quickly,’ he said. ‘Eventually [Johnson was] on the ground, they’re trying to put handcuffs on him, and their knees were on his back.’

“At some point during the altercation, Johnson suffered a head wound; bystanders took pictures and recorded the arrest on cell phone cameras. It didn’t take long for the images to appear on social media.

“Within hours of Johnson’s arrest, a coalition of African American students circulated an email accusing police and the ABC agent of unnecessary force and demanding action. They also organized a ‘teach-in’ and an on-campus march Wednesday evening to demonstrate their anger. …

“Johnson … urged demonstrators to use the incident as a rallying point for unity. ‘We’re all part of one community,’ he said. ‘And we deserve to respect each other, especially at times like this.’”

Tyler Kingkade, senior editor and reporter for the Huffington Post, where this story first appeared, can be reached on Twitter: @tylerkingkade. To Kingkade’s story, the Bay View has added excerpts from a Takepart.com story by Joseph Williams, former White House bureau chief for Politico, who can be reached at joewilliamsdc@gmail.com; and read his blog, The Big Picture. 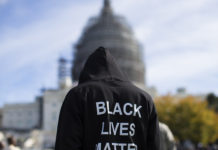