Film review by The People’s Minister of Information JR

The 38-minute short film “Hagereseb” is a rare cinematic treat, and it will be making its Bay Area debut during the San Francisco Black Film Festival on Saturday, June 13, 12 noon, in the Buriel Clay Theater, African American Art and Culture Complex, 762 Fulton, San Francisco. It is not a foreign film but has the feeling of one because it is about two 10-year-old second generation Eritrean friends, who live in the Yesler Terrace housing project in Seattle, Washington, which was built in the ‘40s as the first integrated housing project in the U.S. 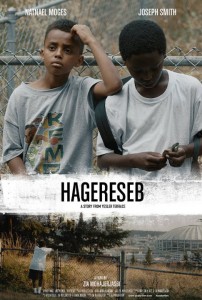 Although there are other ethnicities in the neighborhood that the viewer sees in the background, this story is about the network of bilingual Tigrinya-speaking Eritreans who live there.

The story is set in 1997, and is about Abai, who is trying to get some batteries for his keyboard so that he could get one last lesson from his brother Sam, who is being sent back to Eritrea because he has been getting in trouble. While Abai is on a quest to find some batteries, as well as get a dish for his brother’s dinner from a neighbor, he runs into his buddy Mahari. Mahari tries to come up with all types of “genius” ways to assist his friend. They all fail.

Although the cinematography on this independent film is very good, the gem of it lies in its script writing and acting. There is a lot of Tigrinya interspliced with English as well as West Coast street slang and styles of dress. Abai, the main character, is wearing Converse shoes like people in LA street culture, and Mahari has on a Shawn Kemp Seattle Supersonics t-shirt. Abai, Mahari and other characters are constantly using phrases like “chill out” and “and put that on everything.” These minute things can make a story believeable or unbelievable if you are familiar with the subculture of a particular region.

In one of my favorite parts in the film, Mahari takes Abai to his house, to get some tools and money for a barrel bomb to blow up a telephone booth, so the two friends could steal the money for some batteries. Mahari and his mother have a very tense relationship, which is evident as soon as he walks through the door. This is shown through the pitch, tone and volume of the mother’s voice as well as her composure when dealing with Mahari.

“Hagereseb” is not a foreign film but has the feeling of one because it is about two 10-year-old second generation Eritrean friends, who live in the Yesler Terrace housing project in Seattle, Washington, which was built in the ‘40s as the first integrated housing project in the U.S.

While they are in the house, Mahari’s mother addresses Abai, who is ashamed to talk about his brother who is being sent to Africa. She says: “You remember when I sent my boy Rezene back home to his family and language? He learned a lot, gained knowledge and came back changed.”

Her friend responds with, “What is 911 going to do for them. No, when they come home, just speak kindly to them.” Mahari’s mother replies with, “They should call 911 so that the dangerous bad kids don’t get to them.” Her friend concludes with, “No, that solves nothing. You need to speak to them with respect. Speak to them with peace.”

This is extremely important and relevant, now that “new African Americans” are having to deal with the Black experience here, as in the cases of Amadou Diallo and Abner Louima. Institutionally, Black lives don’t matter.

“Hagereseb” is a beautiful film, written and directed by Zia Mohajerjasbi. Come check it out at the San Francisco Black Film Festival on Saturday, June 13.

In another one of my favorite parts in the film, E.O., a friend of Abai’s bigger brother Sam, addresses the same issue from a different perspective, and tells Abai: “Sam told me your parents is tryna send his ass to Africa for a whole year. What’s up with that? They tryna turn his ass into a f.o.b. (a person who is “fresh off of the boat”) or something!?

Remember when I told that nigga to quit speaking all that damn English around the house? He don’t never wanna listen. Real shit though, if this shit pulls through, your folks are foul.” This was important because cultural shifts, not just in immigrant families, lead to miscommunication and misunderstandings in families, and I think that the screenwriter did a great job of crystallizing this phenomenon with the dialogue in the film “Hagereseb.”

This is one of my favorite films in the San Francisco Black Film Festival because the festival deals with “Black” in a Pan Africanist sense, and the Eritrean experience in the United States is not very well documented in film. It was refreshing to see a new story, instead of a recycled, refurbished plot.

“Hagereseb” is a beautiful film, written and directed by Zia Mohajerjasbi. Come check it out at the San Francisco Black Film Festival on Saturday, June 13, 12 noon, in the Buriel Clay Theater, African American Art and Culture Complex, 762 Fulton, San Francisco.