A heavy and cruel hand has been laid upon me. On Oct. 6, 2015, I was transferred back to Marquette Branch Prison, a two-day ride on the bus, shackled, mistreated and intimidated. I was forced to strip on five different occasions.

I am forced into overcrowding, inadequate exercise, lack of clean clothing and inadequate medical care which violates the Eighth Amendment’s ban on cruel and unusual punishment. I estimate over 75 percent of the prisoners in Marquette have mental problems. 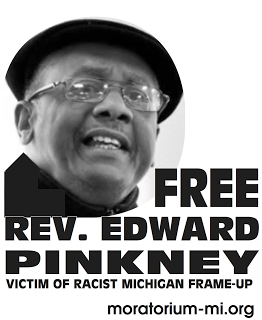 I have been an eye-witness to at least five incidents where prisoners were beaten by corrections officers. The Michigan Department of Corrections has been able to dismiss the majority of allegations of abuse and misconduct by claiming that inmates lie and the correctional department always tells the truth.

The privileged public believes that the prison system is doing its best to protect them. In the eyes of the public, law enforcement and corrections do not lie.

Once a dozen prisoners were lined up and one of the prisoners asked if he could use the restroom because he could not hold it. In response he was beaten and ordered to strip and get on his knees; then he was further beaten by a number of corrections officers.

The problem I am facing is that the long and cruel arms of Berrien County can reach the Michigan Department of Corrections. They will use the correctional officers to use the inmates to carry out their acts of violence.

I believe that Berrien County officials have put a hit on me, inside the prison system. I believe they are trying to force me to die in prison.

If I do not survive this, you will know the reason why. Their boss, the blood-sucking vampire Whirlpool Corp., is financing this hit.

Corporations like Whirlpool can only commit crimes through flesh and blood people. It is only fair that people who are responsible for committing crimes violating human rights be held accountable, including judges, prosecutors, law enforcement, juries and, most importantly, corporations.

I believe that Berrien County officials have put a hit on me, inside the prison system. I believe they are trying to force me to die in prison.

The public needs to have confidence that there is one system of justice. We now have two systems of justice, one for the rich and one for the poor. Equal justice should apply to all regardless of whether the crime occurs on the street corner or in the board room.

The blatantly unconstitutional conduct by Judge Sterling Schrock, Prosecutor Mike Sepic, Sheriff Bailey and the all-white jury have placed my life in danger. A prison hit has been placed on me.

I need you to stop watching all the courtroom drama and law enforcement movies. I need you to stand with me against the corrupt, broken system, a criminal enterprise operating in Berrien County and across the country – a lynch mob in black robes and three-piece suits. An injury to one is an injury to all. -Rev. Pinkney

This past weekend, Mrs. Dorothy Pinkney, Rev. Pinkney’s wife, and supporter Marcina Cole were able to travel the 480-plus miles to Marquette, Michigan, to visit Rev. Pinkney in prison. Although there was snow the second day, luckily they were able to visit both days for a total of about six hours.

On Nov. 11, I set out on my journey to go to Marquette Branch Prison to see Rev. Edward Pinkney. Hours passed; we arrived in Benton Harbor, Michigan, and knocked on Mrs. Dorothy Pinkney’s door. I was so happy to see her, we embraced. I looked at the many pictures on the wall of Rev. Pinkney with dignitaries and Danny Glover, the actor, posted in the vestibule.

The next morning we left early, women justice warriors brave enough to face the atrocities of inequality in the political and judicial system. When we arrived on Thursday, Nov. 12, in the prison parking lot, we saw ahead of us an old brick building looking like something from a horror movie.

Guards were walking around entering and exiting the building. I was relieved that when I handed my driver’s license to the guard at the front desk and he checked the computer, my name was on the visitor list, thank God.

Mrs. Pinkney and I had to go in a room with the female guard. Before entering the locked steel gates, the guard instructed us one at a time to remove our shoes, lifting each foot so that she could see the bottom of it. I then faced the wall with my arms extended out for the female guard to do a pat down.

Mrs. Pinkney and I were cleared to go past the front desk, where we signed our names on the sign-in sheet. We stood by the steel gate, I heard a loud clank sound, then the gate opened. We entered and proceeded to go through the metal detector. Then there was another glass partition with a guard to our right to get our hand mark, and I had to place my hand face down for the ultraviolet light to shine on my hand.

After that, there was another metal gate, the loud clanking sound again, and the gate opened. We went down a few stairs to a big open space, and that’s where the visiting room was, in the vestibule – vending machines, with pop and other junk food, no hot foods, no microwave.

The female guard grabbed three chairs. One was a different color than ours; the white chair was for the inmate. Mrs. Pinkney said the guard stated that the seat that her husband was going to sit at had to face the guard.

On each side of the hallway where we were sitting were several glass partitions with phones for prisoners to speak to visitors who could not be in physical contact with the prisoner. Behind me there was a large glass partitioned room for the prison guards. Many walked through the room throughout the three-hour visit. Those guards were coming out of the front gate and side gate and going in the rear room.

Rev. Pinkney was very surprised to see his wife because no one told him who had come to visit him. Unfortunately, we were not able to tell him in advance because his phone privileges were cut off. He had a big smile to see his wife standing in front of him. He kept saying her name over and over again: Dorothy. It was a touching moment to witness.

Rev. Pinkney mentioned that he heard even in prison that the demonstration at the headquarters of the Michigan Department of Corrections (MDOC) went very well. I noticed as we sat back in our seats, the female guard had all eyes on us.

By the way, there were white visitors sitting not too far from us, but they were not getting the gazing that the female guard gave us. We were being watched the entire time of our visit. I suspect the guard was told to keep her eyes on us at all times.

The prison conditions are horrible for Rev. Pinkney. The name calling continues, lights are still being shined on him through the night causing sleep deprivation, no change of clothing, 24/7 locked down in his cell. The only time he can come out is when he has a visitor. One person was killed last week by a prison guard. Yes, Marquette is a very dangerous place to be for Rev. Pinkney.

Rev. Pinkney gave me some instructions: The overall campaign is to get the word out about his mistreatment at Marquette Prison. These are some of the things we discussed:

I was very uncomfortable at Marquette Branch Prison, and I felt an ominous presence and sense that something is not right at this prison. Yes, we must try very hard to get Rev. Pinkney out of this concentration camp called a prison that’s filled with killers. With the help of a legal team, supporters across this country and abroad, his wife and other members of his family, we will help set free Rev. Edward Pinkney now!

This story originally appeared on BHBANCO (Benton Harbor Black Autonomy Network Community Organization), the website for Rev. Pinkney’s campaign for justice in Benton Harbor, Mich., and, now that he is incarcerated, to advocate for his freedom.