I constantly cover the Bay Area independent Hip Hop scene because I believe, like the great Marcus Garvey, that we need to know our history, because a tree without roots is dead. Now where are you supposed to find this history?

I have taken it upon myself to preserve what we have done in Northern Cali to create an autonomous music industry in the streets, right alongside a corporate music industry that wanted to control every aspect of our culture. We know a lot of these economic freedom fighters by rap monikers, but we don’t know what was done to get us where we are respected as the Bay Area on the international music scene, but specifically the national Hip Hop scene.

Stone Ramsey is one of the businessmen behind the curtain who has aided and assisted everybody from Dru Down and Yukmouth to the Gov and Pac. Now he has transformed his relationship in music with ghetto wordsmiths Keak Da Sneak and Mistah Fab into literature, and Stone Ramsey is writing street lit with these rappers. Check him out, as you think about what you and yours will be reading next year.

M.O.I. JR: When in your life did you decide that you wanted to be a fiction writer? Who are some of the other writers that you are inspired by?

Stone Ramsey: I was recording my album, “International Blunt Funk II,” behind enemy lines, with the help of such artists as Keak Da Sneak, Tuff da Goon (RIP), Black C of RBL Posse, Yukmouth, Dru Down, JT The Bigga Figga and many others, until correctional authorities slammed me in administrative segregation for alleged misconduct. Housed there, my creative juices were still running, and I couldn’t sleep at night, so writing became a therapy of sort. I was inspired by a diverse set of authors: “Crime and Punishment” by Fyodor Dostoyevsky, Assata Shakur, Wilbur Smith and “Dutch” by Kwame Teague. 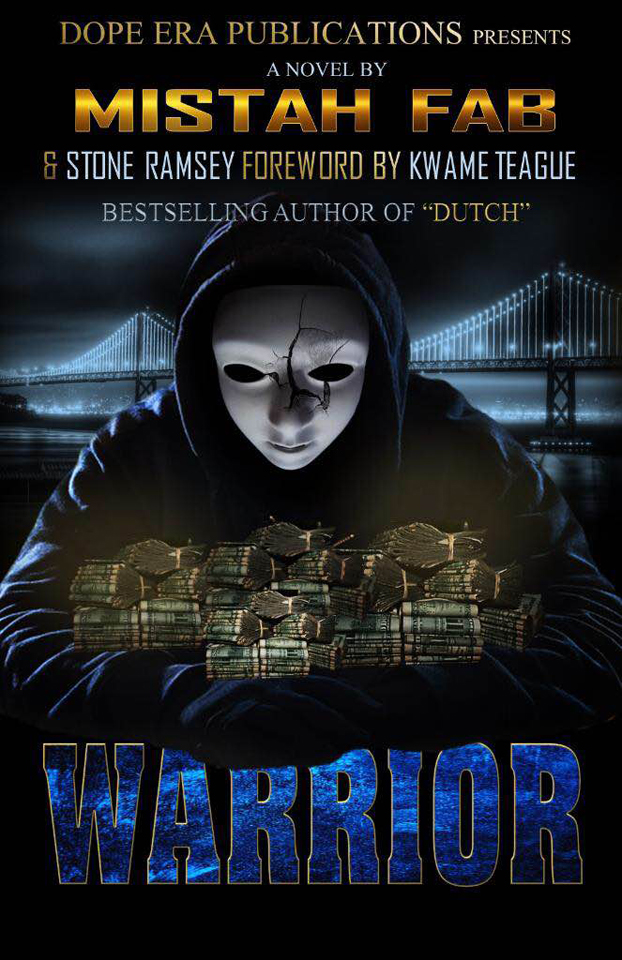 M.O.I. JR: How did being locked behind enemy lines for a considerable amount of time affect your ambitions to write?

Stone Ramsey: Behind enemy lines, I had the opportunity to walk the yard with catz like Big Tray Deee of Snoop Dogg’s multiplatunum group Tha Eastsidaz and JDee from Ice Cube’s legendary group Tha Lench Mob. In fact, Tray Deee wrote the foreword for my debut novel.

It gave me the time and opportunity to polish my craft. Many think that if we simply toss our thoughts on paper, we have a book. But just as an apple pie has a recipe for optimal results, so does baking – or publishing a book.

M.O.I. JR: What was the creative process like for your first book, “Yadadamean Bay Bizness,” that you did with Keak Da Sneak.

Stone Ramsey: It was fairly simple for me, because I co-managed Keak Da Sneak when he was a part of the legendary group 3XKrazy. I basically merged my experience in the streets, tied it with a hood love story, and sprinkled it with a lil Hip Hop.

M.O.I. JR: Can you talk about your relationship with Oakland veteran rapper Mistah Fab?

Stone Ramsey: I was in Juvenile Hall back in the day with Fab’s brother Antjuan. And when I was behind enemy lines I would always listen to his first album, “Son of a Pimp,” and be like, “This lil dude is dope!” I ran into his homey, Daiviyal Jones. He gave me the line on bruh.

Soon after I’d call Mistah Fab from my cell phone . He was like, “Man, I heard a lot about you.” And he would ask me a lot of questions about what is was like in the ‘90s, and we created a strong bond.

As soon I touched down, he was like, “Unc, I got you! It’s whateva!” Mistah Fab is an intelligent dude! We linked up the minute I came home and he gave me valuable insight, and I just ran with it.

M.O.I. JR: What made you want to write novels with well known Oakland rappers?

Stone Ramsey: Street lit is basically paper Hip Hop. And, while I was on my 16-year journey, I found out, albeit sadly, that the young catz didn’t want to read the literature I was blessed to study. They only wanted to read urban street lit.

It was at this point in my life that I knew I had to embrace these young gods with the knowledge that my elders bestowed upon me. And what better way to connect with them than allying with the same artists that were already in their ears. 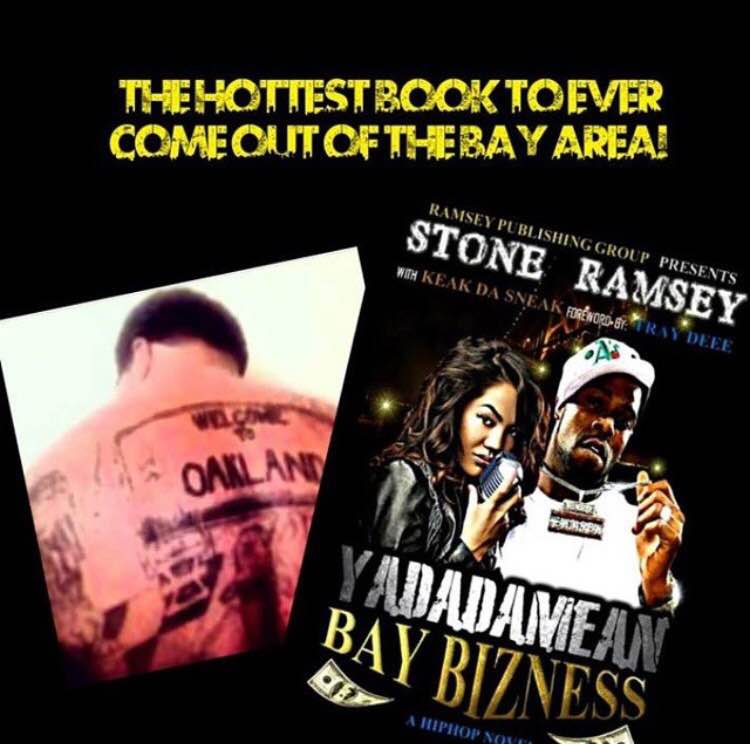 M.O.I. JR: What makes your street lit different from all of the other books in this genre?

I say this humbly and respectfully; my street cred is certified! Moreover, I’ve studied extensively, reading everything from Dostoyevsky, Tolstoy, Machiavelli to my true inspiration, Comrade George L. Jackson. Thus I pulled from the aforementioned elements and gave – at least in my opinion – street lit a unique spin.

M.O.I. JR: Why is it important for Black people to read?

Stone Ramsey: It was once a crime for Black people to read, as reading frees your mind from the illusions of face value and/or what somebody told you. Reading is like turning your mind into a rocket launcher, as every book you read becomes a rocket, and when you wanna blast off intelligently, you have the capabilities to do so.

M.O.I. JR: Why is it important for us to write our own stories?

Stone Ramsey: Writing our own stories is important because the Black experiences belong to Black historians. You see, when you write a book, you not only become an author but you also become an historian in the process, because in the confines of your book you’re telling what life was about during those times.

M.O.I. JR: Can you talk about the role that you have played in the Bay Area rap scene, where you have created peace between warring factions that could have been driven to kill each other?

Stone Ramsey: I started in the rap game with my good friend and colleague, Joseph “The Gov” Flowers. We grew up on Seminary Avenue (Sem City) in Oakland, California. He came out with an EP entitled “The Govenor Is Taxin’.” The hit song on the tape was “Never Got Gaffled Like That!” featuring Tupac Shakur and Richie Rich.

I was just hustlin’ hard, didn’t never wanna rap, but he wanted me to accompany them on shows, and I reluctantly did so. (I say reluctantly because if I left the hood, I’d be essentially sending my money to die).

Subsequently, Gov and his brother, Anthony Flowers, and several others were indicted for an alleged million dollar drug ring. Gov had several music projects in limbo and asked that I assist him. I did so, and I created my own record label, Blunt Funk Records, releasing the Bay Area classic compilation “Internationl Blunt Funk,” featuring artists such as The Luniz, DruDown, Askari X, 3XKrazy, Swoop G, Cydal and many others.

Because of my extensive background in Bay Area Hip Hop, many artists come to me to squash unnecessary beef. And I do so, compelling them to focus on the art and less on the BS.

There were several legendary artists hugging the corners of Seminary Ave. at the same time – catz like Seagram, Poohman, Gangsta P and Askari X. And down the street you had Dru Down on 50th Ave.

Gov and I had recently paroled from CYA, but I was older, and Lil D had been indicted, so the Town was wide open, and most of the young homies looked to me for guidance, as most of us didn’t have fathers in the household.

This was an unprecedented time. The OGs before us never seen the type of money we were seeing – other than Felix Mitchell and a handful of others.

Many people are unaware of the fact that street legends like Darryl “Lil D” Reed and Felix Mitchell’s family stayed on Seminary. This was my reality; these were my influences.

Subsequently, Gov and I created Handlebar Management, housing the very best artists in the Bay: platinum artists Tha Luniz, Dru Down, 3XKrazy, Cydal and Swoop G (off the “Murder Was the Case” soundtrack). Gov and Tupac were like super close, so the world was ours.

But, unfortunately, at that time Suge Knight was the business model, when it should of been Russell Simmons.

M.O.I. JR: How could people keep up with your work?

M.O.I. JR: How could people purchase your books?