by Johanna Fernandez, The Campaign to Bring Mumia Home

It was an amazing day yesterday in Scranton, Penn., with more than 100 people inside and outside the courtroom. Folks joined us from all over the East Coast.

The judge, Robert Mariani, began by reading an excerpt from the papers Mumia filed with the court, citing the life threatening conditions he suffered when he was hospitalized on March 30, 2015. The judge referred to those conditions as “serious,” signaling to all in attendance that he meant business.

It was an amazing day with more than 100 people inside and outside the courtroom. Folks joined us from all over the East Coast.

However, even before the proceedings began, the DOC’s attorney, Laura J. Neale, argued for dismissal of the case on a technicality. She argued that Mumia violated procedure in failing to exhaust his DOC (Department of Corrections) administrative appeals process first before filing a suit in court and on that basis the judge should dismiss.

Our attorneys, Bret Grote and Bob Boyle, literally took out the demolition equipment and went to town. The judge disagreed with her too, citing precedents with which she was unfamiliar. The judge then asked her: Are Abu-Jamal’s claims legitimate?

After much back and forth she was forced to concede that they were legitimate, but insisted that there was a violation of the process. Then the judge asked her, “So do you mean to tell the court that you are upholding form over content?”

Shortly thereafter, the court adjourned because the DOC’s attorney asked the judge to register his decision in a formal ruling. He came back with a powerful opposition to her motion citing precedent. And p.s. he came back with fire in his belly.

First order after that was to hear Mumia. Although he was stoic, Mumia painted a picture of his tortured, Job-like biblical crisis, explaining among other things how he scratched himself bloody at night at the height of the crisis.

The DOC’s attorney argued that Mumia is better now because the DOC doctors administered the proper medicines. Mumia’s testimony ended with a question.

Mumia Abu-Jamal: Yes, with it I can live; without it I may die.

Meanwhile, Pam Africa was managing the rotation of folks into the courtroom and intermittently leading the protest outside with the usual fire and power she brings to the struggle. The MOVE organization and many Philly supporters held it down in the cold and, at one point, a white man brandishing his gun with a press pass provoked the rally.

Four police officers stood by, flanking him on both sides at times. Our side took pictures, proceeded to expose him as an apparently police-supported provocateur, and kept it moving.

Back inside the courtroom, our good doctor, Dr. Joe Harris, took the stand as our expert witness. Movement attorney Bob Boyle painted a compelling portrait of the situation with a quick-fire barrage of questions.

Dr. Harris rocked the court, arguing that Mumia’s skin problem (Necrolytic Acral Erythema), anemia and low hemoglobin count are all consequences of his active Hep C and that the only solution is treatment with the cure. He also explained that Mumia’s skin condition hasn’t cleared, despite the fact that he has been give the strongest topical medicines in the market, which Dr. Harris called “big guns” medication.

That remains the case, he continued, because Mumia’s skin condition is tied to the untreated Hep C. He also added that it is common for this kind of severe skin condition to come and go in Hep C patients; but that in the meantime, the Hep C virus continues to advance as indicated by signs of serious liver damage in Mumia’s system.

At the conclusion of Dr. Harris’ testimony, the judge decided to adjourn. We return to Scranton on Tuesday, Dec. 22, for cross examination of Dr. Harris and more witness and expert testimonies.

It was a long day. A few snow flurries came down outside, and it was freezing in the courtroom.

Dr. Harris rocked the court, arguing that Mumia’s skin problem, anemia and low hemoglobin count are all consequences of his active Hep C and that the only solution is treatment with the cure.

But we got a sense of our power. Except for the DOC attorneys, all in the courtroom – including the judge – were attentive to the moral weight of this life and death condition. The lives of the 10,000 Pennsylvania prisoners with the Hep C virus were on the balance and in the air in the courtroom. We left understanding that health crises like these illuminate much of what it means to be human.

We got a sense of our power. Except for the DOC attorneys, all in the courtroom – including the judge – were attentive to the moral weight of this life and death condition.

Then we heard from imprisoned MOVE 9 member Delbert Africa at SCI Dallas, only 30 minutes from Scranton, that he and all the brothers on the block saw us on the evening news. BOOM!

Reporting for the Movement to Free Mumia and all Political Prisoners, with love and in solidarity, 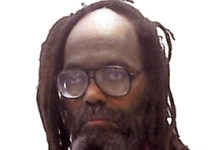